Julio Cortez/AP Photo
A protester gestures in front of the burning 3rd Precinct building of the Minneapolis Police Department.

As police close in, on a hot day in Mobile, Alabama, a Black woman bashes a police car window to provide cover for her comrades during a protest. After her arrest, she frames her actions as defensive. It was necessary for them to escape because Black people are “killed for less” by police—the very reason she showed up to protest.

The same week, a Black teenager in Illinois who had worked as a camp counselor promotes a riot at a shopping mall, framing it as a counterattack against the “inequality” that Black people suffer daily.

I’ve thought about the cases of Tia Pugh and Shamar Betts while watching the trial of Kyle Rittenhouse, the teen who killed two people and injured a third during an August 2020 protest in Kenosha, Wisconsin. And as Rittenhouse walked free on Friday, I thought about all the Black people still in prison for protesting, including Betts, who was condemned to four years in prison and ordered to pay more than $1.5 million in restitution.

As a journalist, I’ve covered the federal government’s prosecutions of protesters, many of them Black, since the summer of 2020, documenting how the state fought for high sentences and innovated creative legal arguments to detain and prosecute them. Like Rittenhouse, Pugh and Betts were two young people caught up in the chaos of that summer following George Floyd’s murder who wound up in prosecutors’ crosshairs. In various ways they all claimed some form of self-defense, though not always in a strictly legal sense. The similarities basically stop there.

Why did only Rittenhouse get to use self-defense as a successful argument in his case? Legally, the answer is obvious: There’s no legal right anywhere in the U.S. to self-defense against systemic injustice. By contrast, there is a right, in many states, to “stand your ground” while being attacked. (Wisconsin doesn’t spell out the right quite like that, but the self-defense law functions similarly.)

But the Rittenhouse verdict tells us a lot about how this country decides which lives deserve to be defended, and the types of violence some are forced to endure without being allowed the right to defend themselves in the ways they see fit.

Is attacking a police car to escape a dangerous situation not a form of self-defense—any less so than choosing to travel to a volatile situation with an AR-15 style rifle loaded with rounds of full metal jacket? Is a Black teenager’s urging of a collective response to forces that endanger and degrade his life a less legitimate form of self-defense than a white teenager fatally shooting two people who were chasing him?

Let’s pretend that the logic that allowed Rittenhouse to be acquitted also applied to Pugh and Betts. To do this, we need to be clear about what the jury was tasked with deciding in Rittenhouse’s case. To find Rittenhouse guilty of first-degree reckless homicide with a dangerous weapon, jurors had to decide whether prosecutors had proven that he had not acted in self-defense. In other words, he had a presumption of innocence not afforded to Pugh and Betts.

While Wisconsin’s laws on self-defense for defendants were strengthened ten years ago amid a wave of Stand Your Ground activism across the country, the statute affecting Rittenhouse’s conduct dates back further. The state law says a person can threaten or use force against another if a defendant believes harm is coming their way. In court, Judge Bruce Schroeder said such a finding should be based on “what a person of ordinary intelligence and prudence would have believed in the defendant’s position under the circumstances existing at the time of the alleged offense.” The belief could even be mistaken, the judge explained to the jury, but it has to have been reasonable.

We can’t be sure of Pugh’s exact thoughts when she broke the car window near an interstate highway. But when police perp-walked the 21-year-old the next day, she let us know that she saw her actions as defensive, yelling out to news cameras, “Genocide is happening, we’re being murdered in the streets.” There is not consensus over the term genocide, but it is a fact that a myriad of things are deadlier for Black people for reasons related to a history of oppression older than the nation itself. In the face of such a grand totality of collective, centuries-long, ongoing violence, what exactly wouldn’t constitute a reasonable form of self-defense?

Meanwhile, in Illinois, 19-year-old Betts made clear in a Facebook post that he thought a local riot would inspire “fear” among the perpetrators of injustice against Black people. More than a year later, in a letter from jail shortly before his sentencing in August, he wrote that he felt angry at the time he did the post, “thinking about how African Americans have been targeted in this country for generations. We’ve suffered from racism, discrimination, police brutality, [and] racial profiling.” All things that he’s personally experienced.

At their sentencing, both Betts and Pugh made it amply clear that they regretted their actions. Rittenhouse won’t have to show contrition at a sentencing hearing, nor is it likely that he will expound on his regret publicly, considering all of the affirmation he has received that his actions weren’t only justified but heroic.

I didn’t only think of Betts and Pugh while following the Rittenhouse trial. I also thought of a few other cases I never really got to write about or investigate deeply. They all stem from acts of resistance in the week after police murdered Floyd. As a “person of ordinary intelligence and prudence,” I can’t see them being entirely unreasonable acts of self-defense, either.

For example, three Black people in Baton Rouge, Louisiana, were federally indicted for setting four separate fires to businesses in the area; according to an FBI agent’s affidavit, one of the defendants told law enforcement he wanted to “attack who was attacking us.” (At least one of the defendants has since pleaded guilty to a conspiracy to commit arson charge.)

In Fayetteville, North Carolina, Charles Anthony Pittman and Andrew Garcia-Smith were charged with setting fire to the Market House, a historic building where enslaved people kidnapped from Africa were auctioned off. Pittman and Garcia-Smith pled guilty and are still in jail. Pittman has yet to be sentenced; in June, Garcia-Smith received 27 months in prison.To my mind, their act, too, can be conceived as defensive, in the form of a warning that this kind of extreme, violent subjugation will not be tolerated by the descendants of its survivors.

It doesn’t feel surprising that the law allowed Rittenhouse to kill without consequence. On the other hand, it seems unimaginable that a judge or jury could say to a defendant, “Yes, you attacked a cop car, or called for a riot, or burned a business, but you are forced to live in a society with a racial hierarchy in which you are at the bottom, so you are hereby acquitted on self-defense grounds.”

There’s no law that imagines self-defense like this. If there were, the whole legal system might collapse in contradiction. 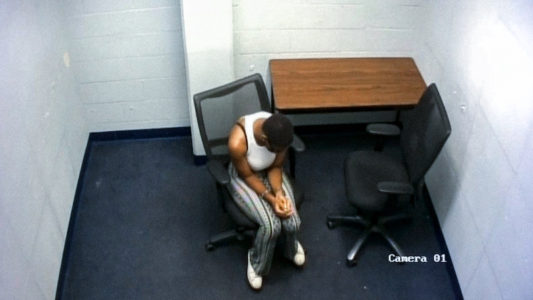 Far from breaking with Trump’s civil disorder prosecutions, Biden has doubled down with an expansive view of extremism. 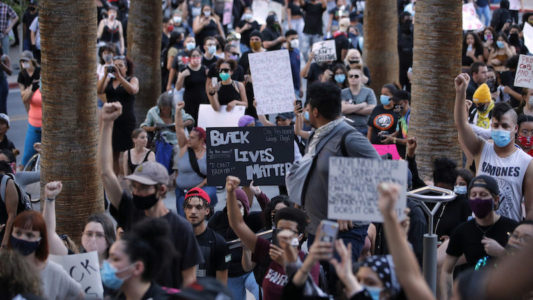 Dozens of protesters who took part in the uprisings after George Floyd’s murder have faced prolonged detention despite COVID-19 outbreaks. 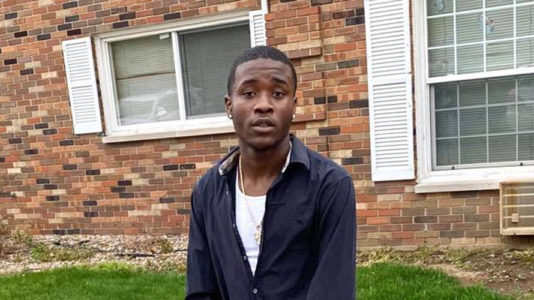 Shamar Betts has been detained since June for a provocative flyer he posted on Facebook amid protests over the killing of George Floyd.

Aaron Miguel Cantú is a Puffin Foundation Fellow with Type Investigations and an investigative reporter currently based in Los Angeles. You can see more of his work here.