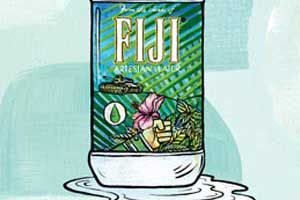 Nearly a year after its publication in Mother Jones, Anna Lenzer’s story on Fiji Water and the corrupt politics in Fiji is continuing to have an impact — now on leading thinkers like Ethan Zuckerman of The Berkman Center for Internet and Society.

With the support of The Investigative Fund, Lenzer uncovered how Fiji Water’s eco-chic, good-conscience media image matches up with reality — in brief, not very well. The Fiji Water billboards Lenzer describes, “We Are Fiji,” propped around the countryside, reveal two uncomfortable truths: the brand’s image of Fiji has shadowed the realities of the country, and the realities — a repressive, undemocratic military government, near-total media censorship, and abject poverty — owe a good deal to Fiji Water and its support of the military junta.

Working off Lenzer’s investigative piece, Zuckerman challenged the theory that the Internet has made information, and not goods, the center of the new economy at the recently concluded TedGlobal 2010 conference. Zuckerman pointed out: “It’s very very easy for me to buy water that’s bottled in Fiji, shipped at great expense to the United States.” At the same time, he said, “It’s extremely difficult for me to get Fijian news, which is really strange because actually there’s an enormous amount going on in Fiji.” Thus demonstrating the continued importance of investigative reporting.

Unfortunately, Zuckerman’s insights are only too timely. Commodore Frank Bainimarama, Fiji’s dictator, recently demanded the sale of the Fiji Times, the nation’s leading newspaper, and mandated jail time for journalists working against “the public interest.” The media needs to “toe the line,” the Commodore explained.