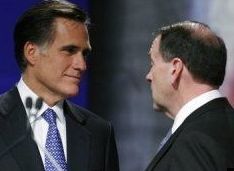 The last Sunday before the caucuses, Mike Huckabee backed off from giving a scheduled sermon at an Iowa church, saying he wanted to worship instead of speak. But on the previous Sunday, just two days before Christmas, in front of a packed crowd at John Hagee’s 5,000-seat Cornerstone Church in San Antonio, Texas, Huckabee equated real believers in Christ with the lowly shepherds who heralded the arrival of the newborn king, and selfish nonbelievers with Herod, King of Judea, who felt so threatened by Jesus’ arrival that he ordered all baby boys to be murdered. Believers, he maintained, are unselfish and want to serve Jesus; the nonbelievers, like Herod, want power and money all to themselves and refuse to worship the son of God.

Although Huckabee has insisted that he didn’t replace the Arkansas capitol dome with a steepleand that his comments in religious settings shouldn’t be misconstrued as theocratic, it was hard for this Jew in the pew (in the church that claims to love the Jews, after all!) not to interpret his sermon otherwise. Arrogant and exclusionary, it left me wondering, what happened to all that peace on earth and good will business?

Huckabee’s claim that “there’s a time for political things, and this isn’t one of them” was typical of his disingenuous “who, me?” routine when he does something blatantly and cynically political while pretending to be “doing the right thing.” (A more recent case in point was his press conference stunt of yanking his anti-Romney ad off the air, while getting free airtime by showing it to assembled reporters. For other examples in religious settings, see FundamentaList 8:3 and 11:3 .) His appearance at Hagee’s church, he maintained, was to discuss the meaning of Christmas. But he of course could not resist an allusion to the campaign — one with which the audience seemed well familiar.

You can find Santa and discounts at stores and malls all over America, said Huckabee, but “if you mention the name of Jesus, as I found out recently, it upsets the whole world,” he concluded to knowing laughter, clearly referring to his now-notorious Christmas campaign ad. “While some people seem to want us to lose Jesus,” he continued, “I would like for us to do our best to find him.”

For Huckabee, the real meaning of Christmas is the resolution of the “dilemma of all mankind: Who will be the king of my life?” Struggling with that conflict, Huckabee maintained, is the reason why so many people are depressed and even suicidal at Christmastime. And all this time I thought it was dysfunctional families, unrealized hearth and home fantasies, and too much alcohol, fat, and sugar!

In his Cornerstone sermon, as he has in other venues, Huckabee affirmed that he believes tithing to the church is biblically required as evidence of obedience to God. Relating it to his Huckmas story, he said that you align yourself with Herod when you want to make your own decisions rather than obey God. That type of person says, according to Huckabee, “I don’t care what God wants me to do. I know he wants me to tithe, but I need that money.”

That was a pretty remarkable statement but right in line with Hagee’s own controversial teaching on the subject. In addition to his war-happy views on Israel and the end times, Hagee teaches the “word of faith,” or prosperity gospel doctrine — in a nutshell, sow a seed (i.e., tithe) to the pastor and reap your own supernatural harvest. Hagee preaches to give your tithe before you pay your rent or make your car payment — it’s God’s money, after all, and if you keep it for yourself, it’s stealing.

For word of faith critics, tithing is not biblically required, particularly when tithes are used to subsidize private jets, pricey real estate, and other luxurious perks for the pastor. What’s more, even though tithing is also a common practice in mainline churches, it would be frowned upon, to say the least, to require a congregant to tithe before paying her own rent.

Prosperity gospel proponents complain that Iowa Republican Sen. Charles Grassley’s one-man investigation of six other prosperity ministries (including of Huckabee pal Kenneth Copeland) is an illegal government intrusion into doctrinal disputes. Grassley insists he is not criticizing the doctrine but only the possible abuse of tax-exempt status. But there’s no question that the doctrine produces vast amounts of money that are shielded from taxation as well as from disclosure, since churches are not legally required to reveal their finances. If they were, we would all find out exactly how lucrative preaching the prosperity gospel is.

(You won’t have to wait much longer to go inside the world of the prosperity gospel. In God’s Profits, which is hitting the bookshelves in just a few weeks, I will take you inside the churches, the television studios, and the White House to show how the prosperity gospel has become an integral part of religion, culture, and politics, and you’ll read first-hand accounts from believers and former believers. I’ll be discussing it on Firedoglake’s Book Salon on Jan. 27, at 5 p.m. EST.)

3. God’s Sugar Daddy Gets Behind Huckabee

While he was in San Antonio, Huckabee stopped by for a fundraiser at the home of billionaire James Leininger, one of the most prolific donors to Christian right and Republican causes in Texas and the country. Known as “God’s Sugar Daddy,” Leininger has bankrolled campaigns, PACs, nonprofits, and Patrick Henry College, which funnels home-schooled kids from its campus into government jobs in Washington.

Later in the week, Huckabee spoke at a multilevel marketing event hosted by Qixtar, owned by the Amway founder and religious right fundraising giant the DeVos family.

4. Romney Gets Some Iowa Evangelical Support and Some Anti-Gay Opposition

But Romney, who has the president of another Pat Robertson offshoot, the American Center for Law and Justice, Jay Sekulow, campaigning with him in Iowa, got some pushback from the anti-gay fringe. (And to be the fringe of the anti-gay religious right takes some serious fringy-ness.) Peter LaBarbera, who heads up Americans for Truth About Homosexuality, which claims to be “devoted exclusively to exposing and countering the homosexual activist agenda,” hascondemned Romney’s support for adding sexual orientation to the Employment Non-Discrimination Act (ENDA).

Meanwhile Sekulow, who’s got an exponentially larger media presence and has led the charge against ENDA, was telling reporters in Iowa that Huckabee lacks the political skill to get conservative judicial nominations coveted by the religious right through a Democratically controlled Senate.

Lou Engle is not exactly a household name, but if you’ve seen the excellent film Jesus Camp, you’d remember him as the preacher who brought along a boxful of plastic fetuses as props for his anti-abortion speech to a room of rapt children. Engle, who is a close friend of Kansas Republican Sen. Sam Brownback, is currently on a prayer tour of the United States. Known in charismatic Christian circles as a “prophetic voice” for worldwide revival, Engle can summon crowds of tens of thousands to his stadium events to pray, fast, and listen to his predictions of future events. He was named one of 2007’s top newsmakers by Charisma magazine (as was Huckabee).

This past weekend, in an e-mail to supporters, Engle wrote that God had spoken to one of his colleagues several years ago about the 2008 presidential election and said, “If the church in America will lean into me in prayer for this, he [a presidential candidate] will come in a brown bag and his five loaves and two fish will be more than enough.”

Although Engle said that he and his friends didn’t understand this word from on high years ago, today he believes that “the Lord may have given us a clue” in Huckabee, who credited the biblical tale of loaves and fishes in accounting for his second-place victory in the Iowa Straw Poll last summer. In a second e-mail, Engle recounted another prophetic story about Huckabee and concluded that “I believe that the nation should rise up and support this man. It is so important that the churches keep crying out to God for supernatural assistance in these elections and that He would promote the humble and the righteous. Let us pray for favor on the one he has chosen to exalt before the others.”

Doesn’t sound like Engle and his pals were hearing any heavenly clues about Romney.

Research support for this week’s FundamentaList was provided by the Investigative Fund at The Nation Institute.