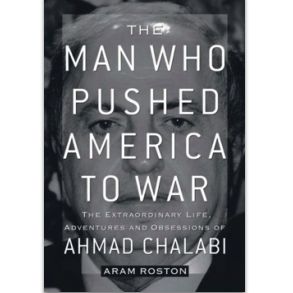 It would be difficult to overestimate the influence that Ahmad Chalabi has had on recent international events. Born into a family of privilege, his comfortable existence as a boy in Iraq was abruptly and violently disrupted by the 1958 revolutionary coup, which sent him into a nomadic, if prosperous, life abroad. Yet Chalabi longed to restore his family’s prominence in Iraq and make a triumphant return to his homeland. It was this singular obsession that would eventually launch him into exclusive political circles and the coveted role of friend and confidant of the United States government.

This extraordinary investigative biography — now in paperback — tells the full story of the man who steered the United States toward its fateful position in Iraq.

“It is a lively and entertaining read, fast-paced and well-told, informed throughout both by Chalabi loyalists and by those who have fallen out with him.”
The New Statesman

“[A] strong and timely bit of research into an extraordinary man whose 'inexplicable certitude in his own entitlement' helped to bring war and ruin to an entire country.”
Times Literary Supplement

“The problem is not that Chalabi was so smart, but that we were so careless and so vulnerable to manipulation. As Roston thoroughly demonstrates, Chalabi understood us better than we understood ourselves.”
Leslie Gelb, The New York Times

Research support for this book was provided by the Investigative Fund at The Nation Institute.