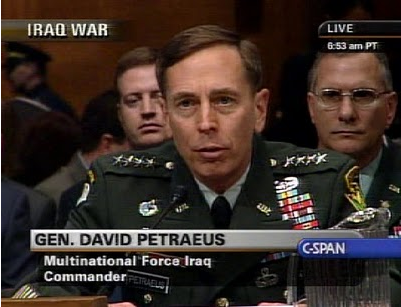 The end of two days of intense Congressional testimony from General David Petraeus and Ambassador Ryan Crocker, a speech from George Bush and testimony from Defense Secretary Robert Gates in front of the Senate Committee on Armed Services triangulated the point we subconsciously knew all along. The troops aren't coming home.

They informed us that troop levels in Iraq won't drop to 100,000 by the end of the year, that Petraeus will have “all the time he needs” to contemplate additional withdrawals and that there would be a reduction in tour time from fifteen to twelve months for those deployed in the future — not an offer for the troops currently engaged, many of whom are in Iraq or Afghanistan for their second, third or fourth tour.

Calculating this imbalanced equation of maintaining troop levels while reducing tour duration should have led to the question, Where will the troops come from? Instead, this three-front assault kept media and Congress primarily focused on the ethics of withdrawing from Iraq — an argument the Bush Administration is much more comfortable having than one on the human costs of invasion and occupation.

In the midst of that April 10 speech, Bush boasted that “recruiting and retention have remained strong during the surge.” Of course he neglected to mention how the Army, because of low numbers of new recruits, was forced to refashion its enlistment criteria over the course of the last few years, allowing them to say at this moment that they were meeting their 2008 recruiting goals of 80,000 in the active Army and 26,500 for the Army Reserve.

Achieving that goal required a reduction in the annual recruitment goal, raising the maximum enlistment age from 35 to 42, permitting those who are overweight or have physical injuries, granting entry to those with a criminal record and lowering the aptitude standards. A study by the National Priorities Project released in January determined that just over 70 percent of new recruits joining the active-duty Army in 2007 had a high school diploma, falling nearly twenty points below the Army's goal of 90 percent. The Army has long known that high school graduation is an important factor, not for performance but for retention.

All these important stories about recruitment shortcomings and concessions had a short shelf life (if they were covered at all) when mainstream media chose to cover sensationalist stories such as the March 6 Times Square bombing and a rash of other acts of violence and vandalism against recruitment centers. But just weeks before the Times Square bombing, an important recruitment story was left severely underreported: the 2009 Department of Defense (DoD) budget proposal put a $20.5 billion line in the budget for recruiting, nearly doubling it from 2008. In 2003, the budget was $4 billion.

Even with the denigration of Army recruitment standards to boost enlistment, the Department of Defense realized they would have to throw money at the problem. Despite the fact that these numbers were up front in the budget summaries, this $20.5 billion barely received passing mention. As William Hartung, Director of the Arms and Security Initiative at the New America Foundation, points out, “The Pentagon has no incentive to broadcast how much they're spending, since it is an indicator of yet another devastating consequence of the Iraq war — the increasing possibility that the US may have a hard time sustaining a high-quality, volunteer military in the wake of Iraq.”

To be sure, the $515.4 billion 2009 overall Department of Defense budget was criticized for being miscalculated, misrepresented and misleading, causing Winslow Wheeler, the director of the Center for Defense Information's Strauss Military Reform Project, to write that “the more you look into the numbers, the more things become unclear, very unclear.” Wheeler points to the Office of Management and Budget (OMB) calculation, which corrected the Pentagon's math on their own budget, putting the Pentagon's request at $518.3 billion, a difference of $2.9 billion in mathematical errors. Even that number is incomplete, since it doesn't include the $70 billion supplemental funds for the wars in Iraq and Afghanistan — a number that, in Wheeler's opinion, ought to be tripled. Nor does it include the $17.1 billion for nuclear weapons research and storage under the Department of Energy's budget.

But the criticism of weaponry has come at the cost of turning a blind eye to the recruitment budget, which has both human and economic costs. Hartung, co-editor with Miriam Pemberton of Lessons from Iraq: Avoiding the Next War, points out that “weapons systems are large and tangible, and at least once in a while there's a debate on what to buy.” For Hartung, the recruitment budget “might be getting less attention than it deserves because no one has been looking closely enough at the budget,” but — more important — “no one on Capitol Hill is going to come out against recruitment.”

According to the Department of Defense, the $20.5 billion will be needed to increase the size of the Active Army to 547,000 and the Marine Corps to 202,000, $15.5 billion to the Army and $5 billion to the Marines. Linda Bilmes, co-author with Joseph Stiglitz of The Three Trillion Dollar War, explains: “The recruiting budget has skyrocketed due to: (a) increased number of recruiters; (b) increased recruitment bonuses; (c) increased payments to Madison Ave advertising companies who are coming up with the marketing and research to put behind this; (d) increased outreach to 'influencers' like parents/coaches and increased pay, travel and expenses for the recruiters.” Indeed, enlistment bonuses, advertising, maintaining recruitment stations and the pay and benefits of tens of thousands of military recruiters make for an expensive operation.

In February, the Army introduced the Army Advantage Fund, a new recruiting program that offers completion bonuses of up to $40,000 to buy a home or start a business. Eligibility requires a high school diploma, top 50 percent on the Army's aptitude test and three to five years of active duty in what the Army calls a “critical MOS” — an enlisted position that has high manpower shortages. But Bilmes says, “What's worth pointing out is that DoD opposes the Webb-Hagel bill to increase GI Bill educational benefits to servicemen at the cost of $4 billion per year, which would directly boost recruiting far more effectively than the strategy that DoD is following now. DoD opposes this because it worries that it will then have a retention problem.”

“If you don't like these recruiting practices,” Wheeler told The Nation, “do something about the war.” It's difficult to disagree with this in principle; if you don't want $20.5 billion spent to recruit American youth (and the not so youthful), then don't create a need for them — i.e., end the war. Of course, one only need be reminded of Cheney's March 19 contemptuous “So?” to realize a one-sided strategy is an ineffective strategy.

We should have known that such a drastic increase in the recruitment budget would have resulted in the outcome that Petraeus and Crocker presented. More importantly, since budgets are prepared several months in advance of their February release date for the fiscal year, which begins October 1, the drastic increase means this Administration and the Department of Defense knew well before February that neither troop reduction nor withdrawal was ever on the table for discussion.

If the recruitment dollars don't yield the result the Department of Defense hopes for, there is an alternative: Wheeler told The Nation, “A draft would be an excellent way to share the burden of war.”

Research support for this story was provided by the Investigative Fund of The Nation Institute.