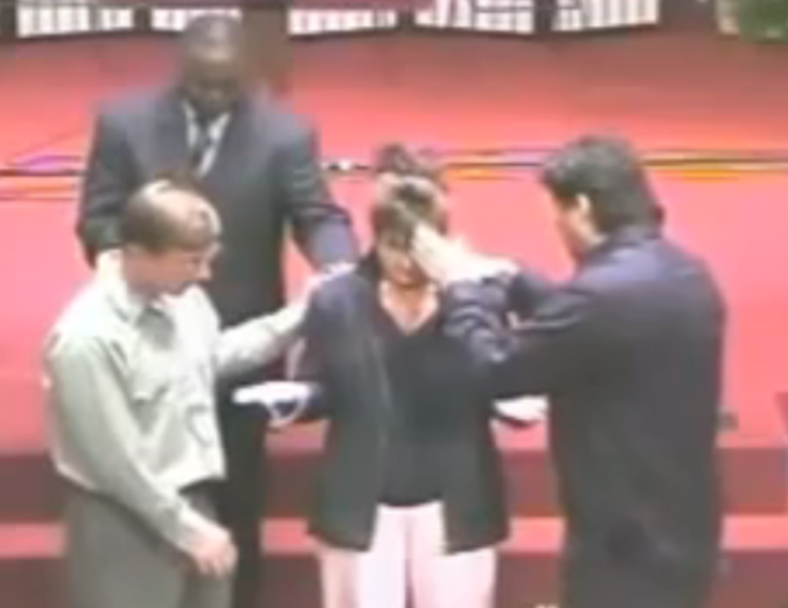 On September 20 and 21, I attended services at the church Sarah Palin belonged to since she was an adolescent, the Wasilla Assembly of God. Though Palin officially left the church in 2002, she is listed on its website as “a friend,” and spoke there as recently as June 8 of this year.

I went specifically to see a pastor visiting from Kiambu, Kenya named Thomas Muthee. Muthee gained fame within Pentecostal circles by claiming that he defeated a local witch, Mama Jane, in a great spiritual battle, thus liberating his town from sin and opening its people to the spirit of Jesus.

Muthee’s mounting stardom took him to Wasilla Assembly of God in May, 2005, where he prayed over Palin and called upon Jesus to propel her into the governor’s mansion — and beyond. Muthee also implored Jesus to protect Palin from “the spirit of witchcraft.” The video archive of that startling sermon was scrubbed from Wasilla Assembly of God’s website, but now it has reappeared.

The Youtube version is below (Palin appears after about 7:30):

Since Palin was nominated as vice president, Wasilla Assembly of God has taken a draconian line with reporters. The church now forbids members of the media from filming, taking notes, or bringing voice recorders to its services. I was able to record Muthee’s recent sermons only by deploying an array of tiny cameras and hidden microphones. Though the quality and comprehensiveness of my footage was severely compromised by the church’s closed door policy to the press, I was not going to be deterred.

By the end of the second day of Muthee’s sermons, the church had been tipped off about me, the liberal media member in its midst. An associate pastor told me he had received an email from an anonymous source warning him about me. When I tried to interview members of the congregation in the church parking lot, my questions were either met with silence or open hostility. I strongly suspect the McCain campaign has mobilized the Wasilla Assembly of God against perceived threats from the media.

But they hardly needed encouragement. On the first night of services, Muthee implored his audience to wage “spiritual warfare” against “the enemy.” As I filmed, a nervous church staffer approached from behind and told me to put my camera away. I acceded to his demand, but as Muthee urged the church to crush “the python spirit” of the unbeliever enemies by stomping on their necks, I pulled out a smaller camera and filmed from a more discreet position. Now, church members were in deep prayer, speaking in tongues and raising their hands. Muthee exclaimed, “We come against the spirit of witchcraft! We come against the python spirits!” Then, a local pastor took the mic from Muthee and added, “We stomp on the heads of the enemy!”

Behind the Christian right’s enthusiasm for Palin’s conservative credentials is a visceral sense that that she has come from them, not to them. Some right-wing evangelicals even believe she has messianic potential. As former Christian Broadcasting Network vice president Jim Bramlettwrote, “Sarah is that standard God has raised up to stop the flood. She has the anointing.”

The Christian right’s analysis is accurate to a certain degree. While Palin may not be The One, she is certainly one of them. Her social policy views, from her rejection of scientific evidence on global warming to her opposition to publicly funding emergency contraception for rape victims, are explicitly influenced by the sectarian theology she has subscribed to since she was a teenager. There is no better evidence of the depth of Palin’s radical convictions than her startling encounter with the witch-hunter, Bishop Muthee.

Next week, I will post an exclusive video documentary here that will shed further light on Palin’s relationship with Muthee and the religious right in Alaska. Stay tuned.

Research support for this ongoing project provided by The Nation Institute.