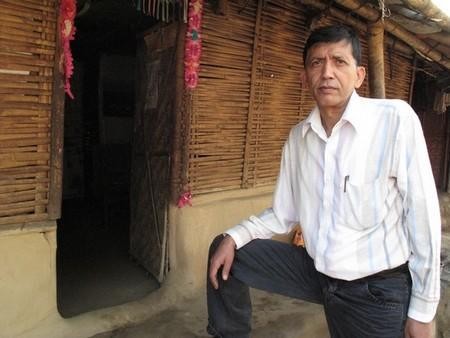 N.B. Giri stands outside his hut in his refugee camps in eastern Nepal, before setting out on his biannual journey to the border with Bhutan. | Credit: DON DUNCAN

In the Indian town of Jaigon on the border with Bhutan, a day’s journey from the refugee camp in Nepal that he now calls home, 47-year-old refugee N.B. Giri waits silently in a small hotel room for his old friend, Gopal. Like Giri, Gopal is an ethnic Nepalese who claims Bhutanese citizenship. But after the expulsions of 1991 that caused Giri to leave, Gopal was one of an estimated 100,000 ethnic Nepalese who remained in Bhutan.

For Gopal, the five-minute trip across the border from the city of Phuntsholing where he works is a risky one, since the Bhutanese authorities discourage contact between those who stayed and those now stranded in the Nepalese camps. “I am worried Bhutanese officers may realize what he is doing and arrest him,” Giri says, shifting on his bed. “There are eyes all over Phuntsholing.”

When Gopal finally arrives, it is only to inform his friend that he can not stay. His boss, a member of the non-Nepalese ethnic majority, offered him a lift, and Gopal, for fear of giving the man cause for suspicion, couldn’t refuse. “He’s downstairs in the car waiting for me,” he whispers sharply. “I really should go, my friend.”

Meetings between Bhutan’s separated ethnic Nepalese in Jaigon are frequently this brief. Though the Bhutanese government says that with democracy ethnic friction is a thing of the past, paranoia and fear still underlie reunions like this one between Giri and Gopal, whose memories of the expulsion and rights abuses of almost 20 years ago remain vivid.

Before embarking on the long journey back to Nepal, Giri makes his way to the Bhutan Gate, a towering, elaborately carved wooden portal that marks the crossing point into Bhutan. As on each of his pilgrimages to Jaigon, he takes a short look through the gate into his native land.

Giri plans to return to Jaigon, but many of the refugees are making the trip this year for the last time. In 2006, the U.S. and a few other Western countries offered to resettle many of the refugees, and their population is now projected to be reduced by almost 70 percent in the next four years. Like any border town, Jaigon is a hectic zone of exchange, where Bhutan and India bleed into one another in a mesh of traded goods, money and ideas. Indeed, for the militant groups that are growing in the refugee camps in eastern Nepal, this part of India — regions called Sikkim and Assam, fraught with their own separatist militant groups and civil discord — is valuable ground for the exchange of military ideas. “We know now that these refugee groups are forming alliances with the bigger, more powerful Indian separatist groups,” said an Indian intelligence officer on condition of anonymity. His federal police unit monitors movement in this corner of India. “This is something Bhutan needs to be worried about,” he said.

Alliances with groups like the National Democratic Front of Bodoland and the United Liberation Front of Assam are bringing tactical and explosives expertise to the ethnic Nepalese militants that they didn’t have access to in Nepal, where the the Maoist insurgency has been put to rest since the civil war ended in 2006.

Throughout 2008, a string of bombs exploded in south Bhutan and in the capital, Thimphu. According to Indian intelligence, most of the bombs were made on Indian territory before being smuggled into Bhutan. But not all the bombs make it that far. Last April, three refugees from the camps died in the Indian town of Siliguri when one of the bombs they were assembling for the United Revolutionary Front of Bhutan — the refugee militant group responsible for one of the larger explosions in Thimphu last year — accidentally detonated.

The refugee camps of eastern Nepal are littered with homesteads missing fathers and older brothers. Most have left for India to work and send home a more substantial wage than they could earn in Nepal. But in some cases, the call to revolution along the way is stronger. “I cannot say how large in numbers they are,” says Sukbahadur B. Subba, chairman of the Human Rights Organization of Bhutan, based near the camps in Nepal. “But these groups have a stronghold in all seven camps and are involving both young men and women.” While regular refugees like Giri make their way along the main roads from Nepal to Jaigon, refugee militants like Comrade Umesh, a 27-year-old senior member of the Communist Party of Bhutan, take the back roads and dirt tracks. Avoiding busy border towns, they prefer to cross into Bhutan through the thick jungles that straddle its porous border with India. They make their way to rendezvous spots in the jungle, with backpacks laden with explosives, knives, some guns and another kind of weapon — Communist literature.

“If all we had to show were our weapons, we wouldn’t get very far,” says Comrade Umesh. “So we also run classes in Bhutan: we have lectures, teach our ideology and train cadres in explosives-making and in guerrilla fighting.” Youthful, heady idealism like that of Comrade Umesh, combined with the refugees’ frustration over the political inaction regarding their fates, makes up the lifeblood of this embryonic insurgency. For now, Umesh says, the militant groups are still laying the groundwork in Bhutan, “both ideologically and militarily,” for an insurgency there. “All these groups need is 200, maybe only 100 people with guns inside Bhutan to make a real impact,” says the Indian intelligence source. And the resettlement project currently underway in the camps, he says, could well play into the resistance’s favor. Resettlement, he adds, may remove the moderates from the camps, creating a remaining population of hardliners — smaller in number yet ideologically unified. Resettlement could also throw a financial lifeline to what is, for now, a poverty-stricken revolution. Once the floodgates of remittances from the newborn diaspora open, moderate refugees like Giri may soon become the funders of the insurgency led by refugees like Comrade Umesh. “We don’t have to wait very long to revolt,” says Umesh. “But nothing is going to change overnight. It will be a slow, gradual fight.”