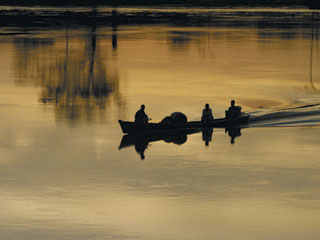 Peru’s Amazonian indigenous alliance AIDESEP hailed the government’s formation of an investigative commission on the June 5 massacre at Bagua as “an important step” towards reconciliation in the wake of June’s deadly unrest in the lowland rainforest.

But indigenous leaders in Peru’s Amazon region of Madre de Dios Sept. 13 issued a joint statement rejecting a Hunt Oil contract on their traditional territories. Antonio Iviche, president of the Native Federation of the Río Madre de Dios (FENAMAD), warned that if Hunt Oil doesn’t quit the territory, indigenous communities will physically expel them. The statement was released following a meeting with Hunt representatives at FENAMAD’s offices in the regional capital, Puerto Maldonado. Hunt is currently opening trails in preparation of seismic exploration within the local indigenous reserve, while FENAMAD has gone to court seeking an injunction to halt the work.

Iviche, a traditional Harakmbut leader, said the oil project threatens the forests and waters of the Amarakaeri Communal Reserve, established in 2002 for the use of local Harakmbut, Yine and Matsigenka communities. “The project will destroy the forest and affect animals we use for food. Instead of going to the supermarket for food or medicine, we go to the forest. We depend on it for our sustenance.”

Iviche also charges that — in violation of international standards and Peru’s constitution — Hunt is operating without the consent of the area’s Native inhabitants. “They never have consulted with the communities,” he said, adding that residents are overwhelmingly opposed to the operations.

“The directors are divided — the company has changed their discourse,” he said, referring to indigenous members of the reserve’s governing council. “But there is a firm position in all the communities against the oil activities.”

On Sept. 9, FENAMAD brought suit before the Madre de Dios Superior Court of Justice — the equivalent of a local district court — seeking an injunction against Hunt’s exploration work. “We have to attack on every level — using the courts but ready to defend our territory physically,” FENAMAD secretary Jaime Corisepa said.

At the end of the meeting, Iviche announced that if Hunt doesn’t withdraw from the reserve, the communities are prepared to carry out a “desalojo” — eviction.

Silvana Lay, a forestry engineer who serves as Hunt’s director of environmental health and safety for the Lot 76 project, defended the company’s position.

“We weren’t going to come in until the Master Plan was approved. We waited two years, and during that period we met with the communities and gave information. We have the signatories of everybody saying the work can go ahead — within the rules, of course. And then we received a call saying the work cannot go ahead.”

FENAMAD attorney Milton Mercado rejected Lay’s portrayal. “The only consultation has been with Shintuya and Puerto Luz,” he said, referring to the two communities whose titled lands Hunt actually intends to work in.

He said there has been no consultation with the other communities that have access to the reserve for hunting and gathering, and whose leaders make up the reserve’s governing council, known as the Administrative Contract Executive or ECA.

“The ECA has never signed any document allowing Hunt in the reserve,” he said. While the reserve’s Master Plan worked out by the ECA and Peru’s public lands agency allows oil exploitation in a general sense, it makes no reference to the Hunt contract. And this provision was added above the protests of the communities.

Consultation is mandated by the International Labor Organization Convention 169, to which Peru is a signatory. The principle is also enshrined in Article 6 of Peru’s constitution.

As tensions mount in Madre de Dios, dialogue between AIDESEP and the government of President Alan Garcia continues in Lima. Seven members of the commission to investigate the Bagua massacre have been chosen — three by AIDESEP, three by the executive branch, and one to represent Peru’s regional governments.

The move came after weeks of dialogue with AIDESEP, and growing international pressure. Days earlier, the United Nations Committee on the Elimination of Racial Discrimination issued a formal recommendation that the government of Peru open an “exhaustive, objective and impartial investigation, including indigenous representatives” into the deadly violence at Bagua.

There are still conflicting accounts of the violence that ensued when National Police troops broke up an indigenous road blockade at Devil’s Curve in Bagua district of Peru’s Amazonas region June 5. The official claim of 34 deaths including only nine Natives is in sharp contrast to as many as 40 deaths among indigenous rainforest inhabitants reported by AIDESEP.

Salomon Aguanash, an Awajon leader from Bagua and AIDESEP spokesman emphasize that establishment of the truth commission is only a first step. The initial issue behind the June protest campaign that climaxed with the Bagua violence — Garcia’s controversial “legislative decrees” on land and resource use issued in preparation for the new Free Trade Agreement with the United States — remains unresolved.

“Of the 100 decrees issued by Garcia, none favor the indigenous peoples,” Awanash said. “If the government does not comply with our demands, we are ready to return to our paro.”

Awanash recalls that this struggle has been underway since Garcia released the decrees in April 2008 — and has resulted in some key victories.

“Decrees 1015 and 1073 were overturned last August following our protests, and later ruled unconstitutional by the congressional constitutional commission,” he said. “But we called a national paro this April that continued through June 5 with the events at Bagua and the lamentable deaths of indigenous people, police and the civil population.”

In the outcry over the Bagua violence, two more of Garcia’s decrees — 1090 and 1064 — were overturned by Peru’s congress. “These decrees would have directly affected indigenous lands and our rights, our flora and our fauna,” Awanash said.

But AIDESEP is still demanding the repeal of several other decrees — 1089, 1020 and 994, according to Awanash.

So far, the Garcia administration has only met two demands — that the government recognize AIDESEP at the dialogue table, and establishment of the Bagua investigation commission. More general demands for a sustainable development model for the Amazon that includes education, health, environmental protection and indigenous participation on decision making may be met with a national plan for the rainforest, scheduled to be released at year’s end, when the truth commission is also to turn in its findings.

More immediate outstanding demands are for restitution to the families of those killed at Bagua, and what Awanash calls a “halt to the persecution.”

With charges stalled against the commanding generals at Bagua, 41 AIDESEP leaders are facing charges related to the incident. Eight have been detained — and one, Santiago Manuin, remains in the hospital, gravely wounded. Three, including AIDESEP president Alberto Pizango, are in exile in Nicaragua. The remainder are in hiding. AIDESEP said any violence by its followers was in self-defense, and wants all charges dropped.

Awanash stresses that every government proposal in the talks must be taken back to regional leaders for discussion. “We are leaders, but we do not make decisions. Every decision is taken in coordination with the base.”

Despite the high price paid at Bagua, the fact that indigenous leaders are now speaking face-to-face with cabinet ministers is unprecedented, Awanash notes.

“For the first time in our history as Peruvian indigenous peoples, we have been recognized by the government since the events of June 5. The government has always maintained that the Amazon is vacant, that there is nobody there — only forest, water and natural resources. Since June, we have been recognized at a national and international level, and we are exercising our rights.”

Awanash said the process by which the decrees were promulgated violated international principles on indigenous rights. “The government proposals were made without consulting the communities. We have the right to be consulted on the development of our lands.”

While consultation is the fundamental principle, he goes further — virtually dismissing the possibility of corporate exploitation of Peru’s indigenous lands.

“There is no international corporation that complies with our demands. Whatever development takes place on our lands, we want it to be under the control of our communities. We want collective development, in which all are equal participants.”

Bill Weinberg is an award-winning journalist and editor of the on-line weekly World War 4 Report.