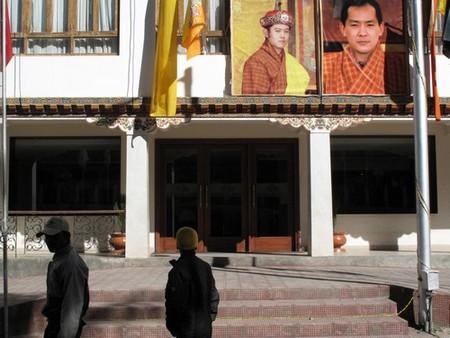 The banners, portraits and flags marking the Bhutanese monarchy’s centenary in 2008, are slowly being taken down in Thimphu’s main streets, as the country eases itself into the new year. But while the rest of the world braces itself for 2009, and the change an Obama presidency may usher in, for Bhutan, 2008 was already a year of change unlike any other.

In March, two years after Jigme Singye Wangchuck, the fourth King of Bhutan, abdicated his throne, Bhutan became the world’s youngest democracy. Wangchuck’s 28-year-old son and heir, Jigme Khesar Namgyel Wangchuck, was later crowned the fifth king and head of state of Bhutan’s constitutional monarchy in November. He vowed to shepherd democracy as it develops.”I will protect you as a parent, care for you as a brother and serve you as a son. I shall give you everything and keep nothing,” he said to the unprecedented crowds gathered in Thimphu to see the Raven Crown placed on his head by his father, the fourth king. “Destiny has put me here.”

For hardliners among Bhutan’s ethnic Nepalese refugees, stranded in seven camps in eastern Nepal, the coronation represented the latest chapter in the continuing dominance of the country’s Dzongkha-speaking Buddhist majority, known as Drukpas. It was Drukpa anxiety over the swelling Nepalese-speaking Hindu population in Bhutan that sparked their expulsion in the early 1990s. But now, according to Prime Minister Jigme Y Thinley, the arrival of democracy — and its iron-clad constitution — to Bhutan has made ethnic discrimination a thing of the past.

“Now all sections of society, the ethnic Nepalese in particular, feel empowered,” the prime minister told World Politics Review. “They can speak up. Now they feel they can be heard, and they are being heard.” Still, little is said about the ethnic Nepalese or about the sudden disappearance of over half of their population from Bhutan 18 years ago. The subject is divisive and taboo. “We are not free to talk about it. And we don’t, because we are afraid, we are worried,” says Indra*, a 36 year old ethnic Nepalese still living in Bhutan, who insisted on meeting in secret. “If they found out I talked to you, I’d be punished,” explained the mother of three quietly.

Estimates put the number of ethnic Nepalese still living in Bhutan at around 100,000 — nearly one-sixth of the population. Many, like Indra, had their family vanish in 1991 and have lived in a mixture of fear and paranoia since then. Today, two decades later, the arrival of democracy promises to eliminate what remains of ethnic inequality in Bhutan. But many ethnic Nepalese here still feel vulnerable, and human rights groups say they still face considerable discrimination.

An example is the government-issued “No Objection Certificate,” or NOC, a criminal background check and clearance form required by all Bhutanese, regardless of ethnicity, to work in government jobs, own property or send their children to school. But “for many of the ethnic Nepalese, maintaining contact with, or having a known link to family in the camps is considered ‘subversive activity,'” says Bill Frelick, refugee policy director of Human Rights Watch. The NOCs, says Frelick, allow the government to deny them their rights without jeopardizing the political identity of a modern democracy.

Yet the difficulty in obtaining NOCs is only an issue for those ethnic Nepalese who still have Bhutanese citizenship. Those without citizenship are in an even more precarious situation. According to Bhutan’s 2005 census, 13 percent of its population is comprised of non-citizens. Most of those are ethnic Nepalese who, like Indra, were stripped of their citizenship through a series of censuses conducted in the years running up to the expulsions in the early 1990s. “I am worried for myself and my children, who [. . .] have also been denied citizenship,” says Indra. Her eldest daughter was allowed attend school in Bhutan until age 12 without proof of citizenship. Now she has to go to India for schooling, says Indra, who herself works an off-the-books job at a local shop.

People like Indra have yet to see the bounties of democracy that the political leadership promises Bhutan. Not coincidentally, it is with this population that the militant groups of the refugee camps in Nepal seek to gain a foothold in Bhutan, in order to stage an eventual revolution. For now, that revolution is embryonic — sporadic guerrilla attacks and bombs detonated across southern Bhutan and in Thimphu over the past 12 months. “We are extremely concerned by this threat,” said Bhutanese Foreign Minister Ugyen Tshering, beside whose party office in Thimphu one bomb exploded in January. “But we have dealt with militancy before and we have succeeded.” Tshering was referring to the Royal Bhutan Army’s swift military operation in 2002, which, at the behest of India, flushed out separatist militants from India’s Assam province who had holed up in Bhutan’s southern jungles.

But nowadays, Bhutan’s weapon of choice is democracy, says its political leadership. “If people have the possibility of local and national participation, then they should feel no rhyme or reason to link up with terrorist groups,” said Minister Tshering. Already, huge steps have been taken by the government to address the deficiencies in state services to the predominantly ethnic-Nepalese regions of Bhutan. During the upheavals of the early 1990s, more than 30 schools were shut in these areas, and many ethnic Nepalese children there have had to do without education since then. But they are now being restored, with half of the schools previously closed now scheduled to reopen by year’s end.

The effort is part of a broader desire to reintegrate Bhutan’s ethnic Nepalese, and drive them away from thoughts of insurrection, says Prime Minister Thinley.”By the end of five years, there will be absolute parity in terms of the provision of . . . services and infrastructure,” he said. “This is how we can prevent conditions for discontent and disaffection from growing in our country.” In a sense, Bhutan has become a battleground, with a disgruntled and often disenfranchised ethnic minority at play. On one side are the insurgents, whose Maoist ideologies and violent tactics continue to make their way into Bhutan from the refugee camps across the border; on the other, the benefits and promise of a nascent democracy, gradually unfurling from its political core in Thimphu to the outer reaches of this small kingdom.