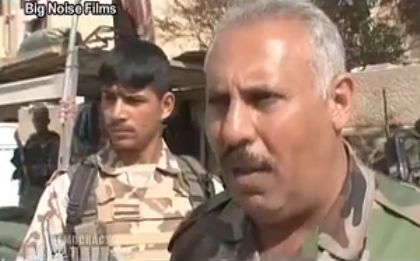 After campaigning on increasing security, Iraqi Prime Minister Nouri al-Maliki’s allies appear to have won a large victory in Iraqi provincial elections. The US military strategy of allying with some Sunni militias has been widely touted as one reason for improved security in certain parts of Iraq. But at what cost? We get a report from Jacquie Soohen and Shane Bauer.

The US military strategy of allying with some Sunni militias, who came to be known as Awakening councils, or Al-Sahwa, in order to fight al-Qaeda has been widely touted as one reason for improved security in certain parts of Iraq.

Jacquie Soohen of Big Noise Films and Shane Bauer with the Center for Investigative Reporting, The Nation Institute and New American Media filed this report from Baghdad about the kind of security these Awakening councils are bringing to Iraq’s capital.

SHANE BAUER: In 2006, the American military and Iraqi police could hardly enter Baghdad’s Dora neighborhood without being peppered with bullets. But in 2007, United States forged an alliance with its former enemies, offering money and military support in exchange for a promise to fight al-Qaeda. When we entered Dora this week, we found American soldiers laughing with these neighborhood militias.

In November 2008, the Americans handed these so-called Awakening councils, or Sahwas, to the Iraqi government. Prime Minister Nouri al-Maliki promised that 20 percent of the Sahwa forces would be brought into the army or police force, and the remaining would eventually be offered civilian jobs or a pension. But Sheikh Abu Suleiman, a Sahwa member decorated with American medallions in Dora, says he had higher hopes.

SHEIKH ABU SULEIMAN: [translated] The government told us, “We are going to pull all of you into the police and army, every last one of you, without exception.” Here in our area, they haven’t incorporated a single one of us up until now. There’s a huge difference between the privileges of the national police and what we have as the Sahwa. We work together to provide security, but we don’t get the same wage.

SHANE BAUER: The wages of Sahwa members are less than half those of the Iraqi national police. At a nearby checkpoint, a former Sahwa member complained that they couldn’t survive on the wages paid by the Iraqi government.

FMR. SAHWA MEMBER: [translated] I used to get my full wage from the coalition forces. Not one month was short. Since we’ve been transferred to the Iraqi government, I haven’t been paid. I didn’t join the Sahwa for money, but people need income. Our wage isn’t enough. It’s so small. My wage, which I’m not receiving, is normally 350,000 Iraqi dinar, and my rent is 200,000 dinar. The 150,000 left over isn’t enough for me to live on.

SHANE BAUER: Abu Suleiman says, without them, the neighborhood could descend back into chaos.

SHEIKH ABU SULEIMAN: [translated] If they don’t incorporate us, something is wrong. It will hurt everyone, frankly. First, Sahwa members will quit. The area will be without the Sahwa. Secondly, unemployment will rise, problems will return. I think the situation will become very detrimental.

SHANE BAUER: Some Dora residents say despite the heavy Sahwa presence, their neighborhood still isn’t safe. Away from our police and Sahwa escorts, one woman spoke to us on condition of anonymity. She fled the area in 2006, leaving a burned house and all of her belongings behind, after people she says belonged to al-Qaeda killed her husband and son. As people trickled back, she returned to her neighborhood, now under Sahwa control. Soon after, she began receiving death threats. She’s afraid the same people responsible for the safety of her neighborhood could be involved.

ANONYMOUS DORA RESIDENT: [translated] I don’t trust the Sahwa. They are cooperating with them. The terrorists themselves became Sahwa. They’re still killing and kidnapping.

SHANE BAUER: The success of the Sahwa strategy has been largely dependent on the ability of the US military and Iraqi government to guarantee a livelihood to former militants. Sahwa members are waiting to see whether the Shia-led government will live up to its promise to incorporate them into the armed forces. Some regular Iraqis are nervous and are wondering whether the Sahwa’s allegiances will extend farther than their paychecks.

Reporting from Baghdad, this is Shane Bauer and Jacquie Soohen for Democracy Now!

AMY GOODMAN: This is Democracy Now!, democracynow.org, the War and Peace Report.

Shane Bauer’s reporting in Iraq was supported by the Investigative Fund at The Nation Institute with additional support from New America Media and the Center for Investigative Reporting.