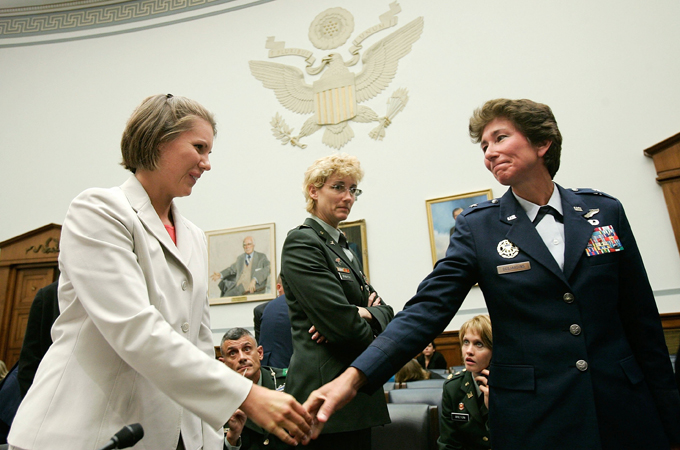 Earlier this year a House Subcommittee held a hearing focused on sexual assault and violence against women in the military and at the academies. | Credit: GETTY

Sexual assault within the ranks of the military is not a new problem. It is a systemic problem that has necessitated that the military conduct its own annual reporting on the crisis.

A 2003 Air Force Academy sexual assault scandal prompted the department of defense to include a provision in the 2004 National Defense Authorization Act that required investigations and reports of sexual harassment and assaults within US military academies to be filed. The personal toll is, nevertheless, devastating.

Military sexual trauma (MST) survivor Susan Avila-Smith is director of the veteran’s advocacy group Women Organizing Women. She has been serving female and scores of male clients in various stages of recovery from MST for 15 years and knows of its devastating effects up close.

“People cannot conceive how badly wounded these people are,” she told Al Jazeera, “Of the 3,000 I’ve worked with, only one is employed. Combat trauma is bad enough, but with MST it’s not the enemy, it’s our guys who are doing it. You’re fighting your friends, your peers, people you’ve been told have your back. That betrayal, then the betrayal from the command is, they say, worse than the sexual assault itself.”

Susan Avila-Smith, the founder of the veteran’s advocacy group VET-WOW in Seattle, Washington, told Al Jazeera that not enough is being done to hold the military accountable for assault.

On December 13, the American Civil Liberties Union (ACLU) and other groups filed a federal lawsuit seeking Pentagon records in order to get the real facts about the incidence of sexual assault in the ranks.

The Pentagon has consistently refused to release records that fully document the problem and how it is handled. Sexual assaults on women in the US military have claimed some degree of visibility, but about male victims there is absolute silence.

Pack Parachute, a non-profit in Seattle, assists veterans who are sexual assault survivors. Its founder Kira Mountjoy-Pepka, was raped as a cadet at the Air Force Academy. In July 2003 she was member of a team of female cadets handpicked by Donald Rumsfeld, at the time the secretary of defense, to tell their stories of having been sexually assaulted. The ensuing media coverage and a Pentagon investigation forced the academy to make the aforementioned major policy changes.

Mountjoy-Pepka often works with male survivors of MST. She stated in a telephone interview that four per cent of men in the military experience MST. “Most choose not to talk about it until after their discharge from the military, largely because the post-traumatic stress disorder (PTSD) in over 60 percent of MST cases is too overwhelming,” she informed Al Jazeera.

Last week the Pentagon released its “annual report on sexual harassment and violence at the military service academies”. At its three academies, the number of reports of sexual assault and harassment has risen a staggering 64 percent from last year.

The report attributes the huge increase to better reporting of incidents due to increased training and education about sexual assault and harassment. Veteran’s Administration (VA) statistics show that more than 50 percent of the veterans who screen positive for MST are men.

According to the US Census Bureau, there are roughly 22 million male veterans compared to less than two million female vets.

In Congressional testimony in the summer of 2008, Lt. Gen. Rochelle, the army chief of personnel, reported the little known statistic that 12 percent (approximately 260) of the 2,200 reported rapes in the military in 2007 were reported by military male victims.

Due to their sheer numbers in the military, more men (at a rough estimate one in twenty), have experienced MST than women.

Billy Capshaw was 17 when he joined the Army in 1977. After being trained as a medic he was transferred to Baumholder, Germany. His roommate, Jeffrey Dahmer, by virtue of his seniority ensured that Capshaw had no formal assignment, no mail, and no pay. Having completely isolated the young medic, Dahmer regularly sexually assaulted, raped, and tortured him.

Dahmer went on to become the infamous serial killer and sex offender who murdered 17 boys and men before being beaten to death by an inmate at Columbia Correction Institution in 1994.

The debilitating lifelong struggle Capshaw has had to face is common among survivors of military sexual assault.

Later during therapy he needed to go public. Since then he says, “I’ve talked to a lot of men, many of them soldiers, who are raped but who won’t go public with their story. The shame alone is overwhelming.”

He recollects with horror, “I was paralyzed with fear. I was in disbelief… shame. When I reported it to the commander he said it was better for me to deal with it after being discharged. Nobody helped me, not even the chaplain. The commander at the processing centre wouldn’t look me in the face. When I filled out my claim later they didn’t believe me. It’s so frustrating.”

Five Marines jumped Javier and beat him until he was nearly unconscious, before taking turns raping him. His sexual victimization narrative reads, “One of them, a corporal, pulled down my shorts and instructed the others to ‘Get the grease’. Another corporal instructed someone to bring the stick. They began to insert the stick inside my anus. The people present during this sadistic and ritual-like ceremony started to cajole, cheer, and laugh, saying “stick em’ – stick-em’.”

Extreme shame and trauma compelled him not to disclose the crime to anyone except a friend in his unit. He wrote in his account, “My experience left me torn apart physically, mentally, and spiritually. I was dehumanized and treated with ultimate cruelty, by my perpetrators… I was embarrassed and ashamed and didn’t know what to do. I was young at that time. And being part of an elite organization that values brotherhood, integrity and faithfulness made it hard to come forward and reveal what happened.”

The reality of being less equal

Women in America were first allowed into the military during the Revolutionary War in 1775 and their travails are as old. Drill instructors indoctrinate new recruits into it at the outset by routinely referring to them as “girl,” “pussy,” “bitch,” and “dyke.”

A Command Sergeant Major told Catherine Jayne West of the Mississippi National Guard, “There aren’t but two places for women – in the kitchen or in the bedroom. Women have no place in the military.”

She was raped by fellow soldier Private First Class Kevin Lemeiux, at the sprawling Camp Anaconda, north of Baghdad. The defense lawyer in court merely wanted to know why, as a member of the army, she had not fought back.

The morning after the rape, an army doctor gave her a thorough examination. The army’s criminal investigation team concluded her story was true. Moreover, Lemeiux had bragged about the incident to his buddies and they had turned him in. It seemed like a closed case, but in court the defense claimed that the fact that West had not fought back during the rape was what incriminated her. In addition, her commanding officer and 1st Sergeant declared, in court, that she was a “promiscuous female.”

In contrast, Lemeiux, after the third court hearing of the trial, was promoted to a Specialist. Meanwhile his lawyer entered a plea of insanity.

He was later found guilty of kidnapping but not rape, despite his own admission of the crime. He was given three years for kidnapping, half of which was knocked off.

The long term affects of MST

Jasmine Black, a human resources specialist in the Army National Guard from June 2006 to September 2008 was raped by another soldier in her battalion when she was stationed in Fort Jackson, South Carolina. She reported it to her Sexual Assault Response Coordinator (SARC) and the Military Police, but the culprit was not brought to book.

After an early discharge due to MST and treatment at a PTSD Residential Rehabilitation Treatment Program (PRRTP) facility, she was raped again by a higher-ranking member of the air force in February 2009.

Administrator for a combat engineering instruction unit in Knoxville, Tennessee, Tracey Harmon has no illusions. “For women in the military, you are either a bitch, a dyke, or a whore. If you sleep with one person in your unit you are a whore. If you are a lesbian you are a dyke, and if you don’t sleep with other soldiers you are a bitch.”

Maricela Guzman served in the navy from 1998 to 2002 as a computer technician on the island of Diego Garcia. She was raped while in boot camp, but fear of consequences kept her from talking about it for the rest of her time in the military. “I survived by becoming a workaholic and was much awarded as a soldier for my work ethic.”

On witnessing the way it treated the native population in Diego Garcia, she chose to dissociate from the military. Post discharge, her life became unmanageable. She underwent a divorce, survived a failed suicide attempt and became homeless before deciding to move in with her parents. A chance encounter with a female veteran at a political event in Los Angeles prompted her to contact the VA for help. Her therapist there diagnosed her with PTSD from her rape.

The VA denied her claim nevertheless, “Because they said I couldn’t prove it … since I had not brought it up when it happened and also because I had not shown any deviant behavior while in the service. I was outraged and felt compelled to talk about what happened.”

While it will go to any length to maintain public silence over the issue, the military machine has no such qualms within its own corridors. Guzman discloses, “Through the gossip mill we would hear of women who had reported being raped. No confidentiality was maintained nor any protection given to victims. The boys’ club culture is strong and the competition exclusive. That forces many not to report rape, because it is a blemish and can ruin your career.”

The department of defence reported that in fiscal year 2009, there were 3,230 reports of sexual assault, an increase of 11 percent over the prior year.

However, as high as the military’s own figures are of rape and sexual assault, victims and advocates Al Jazeera spoke with believe the real figures are sure to be higher.

Veteran April Fitzsimmons, another victim of sexual assault, knows what an uphill battle it is for women to take on the military system. “When victims come forward, they are ostracized and isolated from their communities. Many of the perpetrators are officers who use their ranks to coerce women to sleep with them. It’s a closely interwoven community, so they are safe and move fearlessly amongst their victims.”

Her advice to women considering joining the US military?

“The crisis is so severe that I’m telling women to simply not join the military because it’s completely unsafe and puts them at risk. Until something changes at the top, no woman should join the military.”

This is the first in a two part series on sexual harassment in the US military. Read part two here.