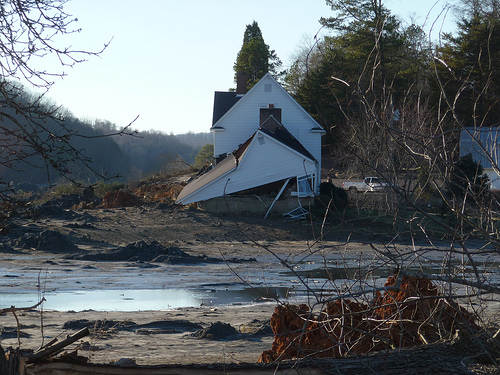 Even after a wall of toxic coal sludge roiled through her lakeside neighborhood, Linda Tarwater considered herself lucky: her home, unlike those of some neighbors, wasn’t washed away. But then came all the talk about contamination, of toxins locked inside the muddy mixture of water and coal ash, a byproduct of coal burning.

“When they told us everything that was in that ash, I was shocked,” she says. “They say the ash has all these toxins, yet the TVA says there’s no danger.”

The Tennessee Valley Authority is the federally funded electric utility that produced the ash, mixed it with water and stored it inside a forty-acre holding pond at a plant in Kingston, Tennessee, some forty miles west of Knoxville. On December 22 an earthen dike collapsed, releasing 1.1 billion gallons of the muddy waste, which knocked houses off foundations and poured into the Tennessee River basin, which feeds municipal drinking-water systems. TVA and EPA officials scrambled to test drinking water, quickly assuring residents that all was safe. Since then, TVA surface-water tests have consistently shown little to no threat of contamination downstream. Despite these assurances, the largest industrial spill in American history has become the emblem of an industry run amok, of regulatory failures and of a controversial effort to depict coal as a benign energy source.

“This spill is the argument against ‘clean coal,'” says Dan Volz, assistant professor of environmental and occupational health at the University of Pittsburgh. “There’s been a nationwide campaign by the coal industry to promote the use of clean coal. But clean coal is an oxymoron.” Volz says it’s true that new technologies can limit atmospheric emissions. “But the law of conservation of matter means that the toxins that don’t go into the air simply get transferred to wastewater and coal ash,” he says. “If a toxin is in a lump of coal and you burn it, it has to go somewhere.”

Millions of tons of coal ash — laden with toxic substances, including arsenic, selenium and mercury — are produced each year. A large percentage of the dry ash is sold to companies as an industrial ingredient to make products like cement, concrete and mulch. But a lack of federal regulation and the patchwork nature of state laws mean utilities are all but free to decide what to do with the ash. “Unfortunately, the cheapest way to dispose of coal ash is to mix it with water and dump it into unlined lagoons,” says Ben Dunham, associate legislative director of Earthjustice. There are more than 1,300 dumps across the country like the one that failed in Tennessee. And most, experts say, fall under little or no regulation. Even though the ash contains toxins the EPA has determined are dangerous for drinking water and public health, the agency has twice declined to declare ash a hazardous waste. As a result, there has been no federal regulation of coal ash and little monitoring of groundwater, which studies show can become contaminated through leaching. “For years, utilities have been largely free to do what they want,” says Kert Davies, a research director at Greenpeace.

The TVA, the nation’s largest utility, has become a poster child for the failures of self-regulation. Dave McKinney, chief of the environmental service division of the Tennessee Wildlife Resources Agency (TWRA), told The Nation that aerial photos show two-thirds of the ash remaining in the failed structure “has no proper containment.” TVA spokeswoman Barbara Martocci says that some ash lodes remaining inside the lagoon are the same height as the ash that broke away in December. “But it’s not a threat. What’s left is just sitting there,” she says. “Even if parts of it fell off, there’s not enough energy behind it to go anywhere.” She says workers were in the process of “smoothing the pile down so nothing can fall off.” Another problem for the authority is that it is prohibited by environmental regulators from putting the re-collected ash back in the failed pond, and there’s no long-term plan for storing it.

Meanwhile, public health concerns are growing. “The biggest threat by far is that the wet ash will dry to dust and release breathable particles,” says coal ash expert Tom FitzGerald, director of Kentucky Resources Council. The prospect of an emergency deepened on January 28, when Duke University scientists reported that exposure to radium- and arsenic-containing particulates could have severe health implications. “The levels of radioactivity we measured in the ash are almost twice the level the EPA reports for typical coal ash,” says Duke geochemistry professor Avner Vengosh, who added that the difference results from the type of coal that’s burned. “What we know is that right now the ash is wet. But if it is allowed to dry and become a dust, it will contain particles and could become a public health hazard.” In that situation, Vengosh says, living near the ash dust “would be the equivalent of living in a house containing radon.”

Officials at the Tennessee Department of Environment and Conservation say their agency and the EPA are installing air monitors to complement the TVA’s air monitoring. TDEC spokeswoman Tisha Calabrese-Benton says the authority is working to prevent “fugitive dust emissions,” in part by covering ash with straw and planting seeds to grow “temporary ground cover.” But Chris Irwin, an attorney for United Mountain Defense, accused the TVA of using air-quality monitors that failed to meet TDEC and EPA standards. “The TVA has no idea what they are doing,” he says. “Letting it handle the testing and cleanup is like letting the burglar come to the scene of the crime and dust for prints.” Calabrese-Benton says the TVA is operating a high-volume monitor and is adding additional equipment.

Concerns have centered on water contamination. In the immediate aftermath of the spill, the EPA found high levels of arsenic in some spots in the Emory River, but officials assured residents that water-treatment facilities would “most likely” remove toxins before they reached the tap. According to EPA spokeswoman Dawn Harris-Young, the agency has stopped conducting surface-water tests, instead relying on the state to conduct tests that determine impacts on aquatic ecology rather than on levels of drinking-water contamination. In the weeks since the accident, the TDEC and TVA have consistently reported little to no contamination in highly affected areas downstream from the spill. Yet two private groups told The Nation their data show arsenic levels many times higher than what the TVA has reported. One of them, Appalachian Voices, a local conservation group, claims to have tested on the same day and at the same river mile marker as TVA field scientists. “But our values from that day are 310-fold over what the TVA reported,” says Donna Lisenby, a river monitor for the group.

Experts suggested that such large differences may be explained by the fact that ash plumes don’t spread evenly throughout a river — samples from inside a floating plume will reveal greater contamination than those taken in cleaner water. For Linda Tarwater, whose house was spared, all the assurances in the world don’t change the fact that a glass of water from her kitchen sink has a gray film on top. “Even though they tell us the water is fine,” she says, “we’ve stopped drinking it.” She says at least eleven people who live closer to the ash are complaining of breathing problems, burning eyes and itchy throats.

Early on, TVA officials suggested the spill could have been caused by heavy rains and freezing temperatures. But McKinney of the TWRA says the TVA failed to drain water properly from the structure. He also says the authority failed to monitor hydrology inside the containment pond and test its structural integrity after fixing small leaks. “There were no regulations that forced them to keep track of the hydrology as the ash piled up and put pressure on the failed slope,” he says. “And no law forced them to use engineering techniques to get a big-picture look at things after they plugged holes.” When asked about the claims, TVA spokeswoman Martocci says the authority has hired independent experts to determine the cause of the spill.

With outrage building, Congress is rushing to regulate. The Senate Committee on Environment and Public Works held a hearing in January that led to promises to regulate coal ash. In the House, Representative Nick Rahall has put forward a bill to establish uniform federal standards for disposing of coal combustion products, and newly appointed EPA head Lisa Jackson told the Senate in her confirmation hearing that the coal ash issue would be on the front burner for the agency.

Lobbyists see storm clouds. “The utility industry recognizes that some sort of regulatory structure or guidance is going to come,” says David Goss, executive director of the American Coal Ash Association. His affiliates are heading to Congress with “technical information that demonstrates clearly that coal combustion products are not hazardous materials and that their toxicity is similar to comparable products used in everyday settings.” Volz scoffs at this idea. “Nobody with even a rudimentary understanding of environmental science can ignore the scores of ecological studies that show toxins in coal ash damage aquatic ecology,” he says. “This spill has exposed the coal industry’s dirty little secret, which is that nobody knows what to do with all of this coal waste.”

Research support was provided by the Puffin Foundation Investigative Fund at The Nation Institute.