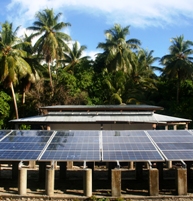 The Fadrai solar array has 216 panels, capable of providing power for the islands' 30 families, a school and the dispensary. | Credit: JUSTIN NOBEL

On the tropical island of Fadrai, between the beach and the thatched men’s meeting house, a path enters a palm forest, passes a cemetery with coral graves and ends in a clearing lined with solar panels.

The solar array, installed last July, provides stable electricity for a tiny island that had never had it. That has changed lives.

“You have light at your homes,” William Radolfetheg, the local principal, now tells his 23 students, “so I don’t see any excuses for not completing your assignments.”

Far-flung Fadrai, home to 30 families, is part of an isolated atoll in a remote Pacific island nation, the Federated States of Micronesia. Atolls like Fadrai are on the front lines of climate change. Islanders say they are seeing eroding shorelines, saltwater inundation, crop failure and strange storm cycles, all things researchers believe are linked to climate change.

On Fadrai, locals point to a row of coconut palms felled in a recent tidal surge. Groundwater has gotten saltier and weather patterns are less reliable, they say. It’s a fate predicted for atolls across the globe, but on Fadrai climate change is arriving at the same time as washing machines, freezers and, to the great excitement of Principal Radolfetheg, photocopiers.

On nearby Falalop Island, luxuries like this have been available for years thanks to diesel generators that supply island-wide power. But unreliable shipping and the high cost of fuel means a power supply that remains unstable. “People are asking when we’re going to change them to solar,” said Mario Sukulbech, who works for Yap State Public Service Corporation, which manages both diesel and solar operations on the atolls.

The corporation’s thirst for power alternatives, combined with a European Union Development Fund grant, has now made Fadrai’s first solar array possible. Another system has been installed on the nearby island of Asor, which has 18 families. Japan has plans to install solar arrays in the nearby Marshall Islands and France is interested in funding additional projects in Micronesia as donors and locals reach a growing realization that rearing economies on fossil fuels is not practical on remote islands.

Fadrai’s array contains 216 panels, providing enough power for the islands’ 30 families, a dispensary and the school. Solar energy is stored in batteries and converted to AC current by inverters. Then it is run via underground cables to the tin- and thatch-roof homes strung along the one sandy lane that serves as Fadrai’s main street. Typhoons and the high cost of maintenance make stringing wires above ground impractical.

In Fadrai, green power junction boxes are scrawled with graffiti, as they might be in any Western suburb. Local reaction to the solar project is mixed. Frozen fish, cold drinking water and light at night to work and weave are appreciated. But only 10 people on the island have steady jobs, nearly all of them with the school or daycare center. “For those people who are employed, sure, they’re interested in having the electricity,” said Martin Yolbuwei, who was contracted by the public service company to help install the array.

But others on the island, including many who rely on money sent by relatives elsewhere, have been reluctant to pay the fee of 45 U.S. cents per kilowatt hour. The money goes to cover the cost of replacing the solar batteries when needed.

Electricity doesn’t necessarily mean Fadrai’s traditions will be lost. On full moon nights people turn the lights off. Meals are still cooked over firewood. And clothes are still hung out to dry with the breeze. “People know (electricity) is going to change the way we live here,” said Radolfetheg, “but they’re trying to slow down the changes.”