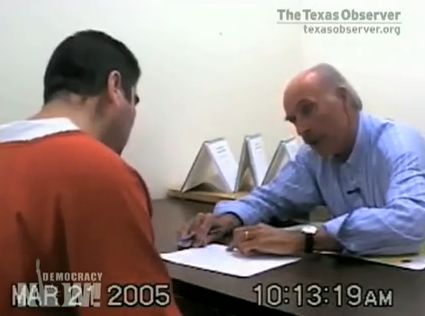 We turn to Texas, where mentally retarded prisoners continue to face the death penalty despite a 2002 Supreme Court ban. The ruling allowed states to set their own definitions of mental retardation to decide on who meets the criteria for execution. Instead of adopting the Supreme Court’s accepted clinical standards for mental retardation, Texas has granted heavy leeway to psychologist evaluations. Now one psychologist is facing scrutiny over methods that critics say unfairly send mentally retarded prisoners to death row.

For more, we go to a report from Renée Feltz for the Texas Observer.

Dr. George Denkowski: The court has asked me to do a mental retardation evaluation. Now here is a court order. Why don’t you take—why don’t you take some time and look at that and see if you have any questions about it.

Reneé Feltz: The man in the orange jumpsuit is Daniel Plata. At the time of this evaluation, he was on Texas death row. The man on the right is Dr. George Denkowski, a psychologist hired by Harris County prosecutors to evaluate whether Plata was mentally retarded. If his answer was yes, then Plata would be spared from execution.

Daniel Plata: I don’t understand this word right there.

Feltz: By 2005, Daniel Plata had been on death row for almost a decade. An immigrant from a rural village in Michoacán, Mexico, his family came to Houston in search of a better life. But in 1996, Plata was sentenced to die for killing a clerk during a robbery at this convenience store in West Houston. His mother, Floresbinda, dreaded his execution. She sought help from any lawyer who would listen.

Floresbinda Plata: [translated] I went to one lawyer, and he said, “This case is too hard. Why would I take your money? You just have to wait.” I said, “Wait for what? For them to execute him?”

Feltz: Plata’s case seemed hopeless, until a 2002 Supreme Court ruling banned executions of the mentally retarded as cruel and unusual. This prompted Kathryn Kase, a senior staff attorney with the Texas Defender Service, to file an appeal to commute Plata’s death sentence to life. She believed she could prove he was mentally retarded, even though he had committed capital murder.

Kathryn Kase: As you learn the science, what you find out is, people with mental retardation are able to do a lot of things.

Feltz: Texas Governor Rick Perry vetoed a law that would ban executions of the mentally retarded, so the state courts made up their own criteria to comply with the Supreme Court’s ruling. But they still consider whether a defendant meets a three-part clinical definition, an IQ of seventy or below, and adaptive behavior deficits in everyday skills used to work and communicate. These systems must be present before the age of eighteen. When Kase interviewed the doctor in Mexico that attended Plata’s birth, he said he had been born practically dead from lack of oxygen.

Dr. Luis Zapien: [translated] We pulled him out, and he was born completely flaccid and purple.

Feltz: A note from Plata’s high school teacher said his intelligence was “extremely low.” And Kase hired a psychologist who tested Plata. He said his IQ was sixty-five, below the cutoff point for mental retardation.

But Denkowski, working for the prosecution, had a different opinion. He said Plata scored a seventy on his IQ test. Then he said that depression and anxiety had hurt Plata’s performance. So he estimated that Plata’s actual IQ score was seventy-seven. And he didn’t stop estimating there. When Plata scored a sixty-one on his adaptive behavior test, Denkowski adjusted that score upward, as well, just as he had done in several other cases.

Kase: He consistently has used the same excuses, which is, these people don’t have retardation; they just grew up in poor households, and they didn’t have good access to education.

Kase: Did the state want to truly know the answer to whether Daniel Plata had mental retardation? Or did it just want some quick and dirty answer that ended in the word “no”?

Feltz: In January 2008, the judge threw out Denkowski’s test scores due to fatal errors with his testing and his scoring. The judge ruled that Plata was mentally retarded and commuted his sentence to life. Now, Denkowski’s colleagues are speaking out against his methodology.

Dr. Jerome Brown: The scores that Denkowski eventually obtained and which he used to say, “Well, this person doesn’t fail at the adaptive behavior level,” is essentially junk science.

Feltz: Dr. Jerome Brown is a psychologist with a long history of evaluating defendants in death penalty cases, including several that Denkowski also worked on. After Plata’s appeal, he filed a complaint against Denkowski with the state licensing board for psychologists.

Feltz: Denkowski will have a chance to respond to his critics in a hearing scheduled this February. He could lose his license. And the other cases he worked on could be reexamined.

Kase: How can one court say that this methodology is junk science, and then how can his opinions stand in other cases? I don’t understand that. It’s not right.

Feltz: A new opinion in those other cases could mean the difference between life and death for at least a dozen other potentially retarded inmates who remain on Texas death row.

Goodman: That report, by investigative journalist Renée Feltz, which accompanies her latest piece in the Texas Observer. Research support was provided by the Nation Institute’s Investigative Fund. And you can go to the texasobserver.org to see the video and read the article. Renée joins us in the studio.

The update right now on this case and what it means for Texas and the country?

Feltz: Dr. George Denkowski, who I describe in the hearing, has a hearing coming up in mid-February in which the methodology he used, which his colleagues have characterized as junk science, is going to come under examination. He’s going to have a chance to defend himself.

If he loses his license as a result of this hearing, potentially more than a dozen cases that he testified in could be reexamined, and we could see up to seventeen men who have IQs below the IQ of seventy, who are basically mentally retarded—the age of twelve is how they act—these people could be removed from death row. Otherwise, we could see junk science continue to be allowed in Texas courts and be used to send mentally retarded people to death row.

Goodman: What is the Atkins decision?

Feltz: The Atkins decision took place in 2002. The Supreme Court said it’s cruel and unusual to execute people who are mentally retarded, mostly because they don’t learn from their experience. The idea that you can say, “Don’t execute people because you’re going to be punished,” they don’t learn that. And so, having that law is not really going to solve the problem with people who are mentally retarded. They should be put in other institutions. No one’s saying that if you commit capital murder and you’re retarded that you shouldn’t go to prison; they’re saying that you shouldn’t be executed as a punishment.

Goodman: If you take Dr. Denkowski out of the picture, Denkowski, what happens?

Feltz: Dr. Denkowski is part of the problem. Judges are accepting his junk science. But another part of the problem is that Texas has no law to enforce the Supreme Court’s Atkinsdecision. Texas needs to pass a law that would guide the courts on how to handle these cases. Right now the courts, many people say, rely on stereotypes. They look to John Steinbeck’s novel Of Mice and Men, using Lennie as a reference for who should be excluded from execution. They need to look at science and not at stereotypes.

Goodman: And what does Texas mean for the rest of the country when it comes to the death penalty?

Feltz: Texas is basically a bellwether state. They execute so many people compared to other states. They have a large death row. Many other states, however, are already out ahead of them in passing laws. Some people say some of those Atkins laws need to be reformed. Texas could come out ahead in that way, if they do pass a law, for example, by saying that when you consider the issue of mental retardation in capital cases, from now on you should consider it before the case proceeds, in a pretrial hearing. Right now that’s not guaranteed in Texas courts. So you could still be sentenced to death, even if you’re mentally retarded, and then at that point someone who’s mentally retarded has to find a lawyer and go through the appeals process, which is, you know, much less likely to happen.

Goodman: Renée Feltz, I want to thank you for an excellent report. Renée Felts’s report can be found at the Texas Observer. You can link to it through democracynow.org.

Research support was provided by the Investigative Fund of The Nation Institute.