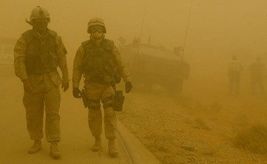 American forces in Afghanistan, who already face roadside bombs and insurgent attacks, may be dealing with an environmental enemy as well — toxic sand that can damage their brains, according to a recent Navy study.

In a presentation at a neurotoxicology conference in Portland, Ore., earlier this month, Palur G. Gunasekar, a senior scientist with the Navy Environmental Health Effects Laboratory, said that dust kicked up in sandstorms contains manganese and other metals. “The sand is a risk factor for inducing neurotoxicity,” Gunasekar said. Compounds that are neurotoxic are those that damage the nervous system or the brain.

The Navy said the findings are preliminary and that so far no definitive link has been found between the inhalation of sand and brain damage. Still, the study followed reports that returning soldiers from Afghanistan and Iraq are experiencing impairments such as memory loss and difficulty concentrating, which may not always be attributable to traumatic brain injuries.

Gunasekar told the group, most of them academic and government scientists, that he and his colleagues focused on “subtle environmental issues that our soldiers face.” Troops caught in sandstorms may inhale toxic particles, which can be carried to the brain, lungs and other organs. “Once they return…they complain about respiratory problems and also they complain about some of the cognitive functions,” he said.

Gunasekar conducted the study with staff scientist Krishnan Prabhakaran and Lt. Cmdr. Micheal Stockelman, both of whom also work at the Naval Health Research Center Detachment, Navy Health Effects Laboratory, located at Wright Patterson Air Force Base, in Ohio. The research team analyzed sand samples from Afghanistan, and found manganese, silicon, iron, magnesium, aluminum, chromium and trace elements. Manganese, on its own, is considered a potent neurotoxicant capable of damaging the brain and causing Parkinsons-like symptoms. They are also studying sand from Iraq.

The researchers conducted tests in which nerve cells were exposed to the toxic sand. “As the sand extract dose increases at the higher concentration you see cell death,” said Gunasekar, who accompanied his talk with a video of a fierce sandstorm.

The researchers also found that exposure to sand could also damage the lungs. Gunasekar noted that soldiers returning from Afghanistan have complained of respiratory problems. Their next step will be to test the effects of exposure to the sand dust in an animal study, if they can secure funding, Gunasekar said.

Neither Gunasekar nor the Navy would provide further details about the study.

Dr. Stephen N. Xenakis, a retired brigadier general who now has a private medical practice and also does consulting for the government and health-related companies, said he wasn’t surprised by Gunasekar’s results. “We know environmental factors are going to make a difference here,” Xenakis said. “Now, fortunately, these scientists have gone down to the cellular level and shown what the manifestations are.”

Xenakis says he sees cognitive problems “all the time in the soldiers I work with,” though the causes are not always clear. “They can’t focus. They have problems with short-term memory. They’ll tell you that stuff that came really quickly to them before, they seem to have more difficulty trying to understand.”

In recent years, there has been controversy over reports of how many troops return home with cognitive problems. Xenakis puts the estimate at 20 to 30 percent, most of whom are survivors of brain injuries from blasts or other traumas. “You had over 2 million people who served, some multiple times, in Iraq and Afghanistan,” said Xenakis. “We don’t know precisely how many have been effected, but you’re looking at a big number.”

Lisa Jaycox is a senior behavioral scientist with the Rand Corp. who has studied cognitive difficulties after exposure to blasts. She supports a closer look at the possible threat posed by sand.

“A lot of people are reporting headaches and difficulties with memories and such that are hard to explain,” she said. “The symptoms overlap with depression and post-traumatic stress disorder. There is lots of controversy about what these cognitive symptoms are, whether they are related to a central brain problem or more of a mental health or emotional problem or a combination. This idea of the neurotoxins in the sand would be yet another thing that could contribute to some cognitive problems. I think there needs to be more research is the bottom line.”

Cmdr. Cappy Surette, a spokesman for Navy Medicine, said Gunasekar was presenting his own opinion, and not speaking in an official capacity. Surette said that the Navy has no record of troops complaining about cognitive difficulties that are unrelated to traumatic brain injuries. The research team’s work was commissioned, he said, “acting on theories that the dust and sand may contain elements of interest.”

Surette added that “research will continue until the complete picture is understood.”

The Navy has several related research projects either in the planning stages, or underway; among them, one study to determine whether exposure to sand can exacerbate traumatic brain injuries, and another looking at combined effects of Iraqi sand and cigarette smoke.

Sheila Kaplan is a fellow with The Investigative Fund at The Nation Institute, now known as Type Investigations.