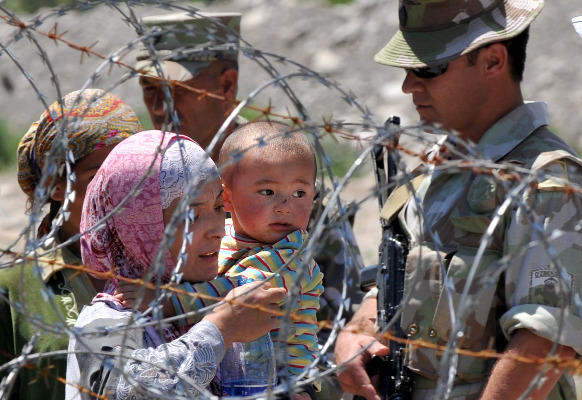 The iron-gloved, authoritarian government in Uzbekistan hasn’t received a lot of approving press or diplomatic applause in the five years since Interior Ministry troops opened fire on anti-government protestors in the city of Andijan in May 2005. The massacre — the government claimed only 187 fatalities but most outside estimates put the death toll between several hundred to as many as 5,000 — seriously ruptured relations with the United States and many European countries and drained the country of international media, NGOs, and United Nations representatives. The fallout included the sudden closing of the United States airbase in Uzbekistan, increasing wariness toward President Islam Karimov, and a major shift in Uzbek foreign policy away from Washington and toward Moscow and Beijing.

But the sudden eruption of lethal violence during four chaotic days in early June against the ethnic enclave of Uzbeks in Osh, a city in southern Kyrgyzstan just a few miles from the Uzbekistan border, has produced unexpected dividends in good public relations for the Uzbek government, which trumpeted rare positive reviews for temporarily housing approximately 100,000 ethnic Uzbek refugees — all women and children — from Kyrgyzstan and for tamping down popular anger on its side of the border.

This positive narrative conveniently dovetailed with a concerted effort on the part of the United States and some European countries if not to fully rehabilitate the international standing of the Uzbek government then at least to significantly improve relations with a strategically important nation bordering Afghanistan. “It does lend legitimacy to the view that Karimov can act in accord with some international standards,” says Michelle E. Commercio, assistant professor of political science at the University of Vermont and a Central Asia specialist.

But it is also a narrative liberated from troubling aspects of the Uzbek response to the Osh crisis. “In essence, Karimov was out to demonstrate to the world a bit of goodwill in the sense that he accepted the refugees, set up the camps,” says Commercio. “The more he could give to the Kyrgyzstan government and calm the situation the better, but I think ultimately housing the refugees in Uzbekistan was troubling to him because, a) the state couldn’t support them, and b) they are more likely to participate in [subversion against him].”

The deadly violence in Kyrgyzstan galvanized international media attention and sparked concern for a traumatized minority Uzbek population vulnerable to reprisals from Kyrgyz police and rogue citizen militias. Long simmering tension between ethnic Kyrgyz and ethnic Uzbeks sparked deadly clashes after opposition protests successfully overthrew the president of Kyrgyzstan, Kurmanbek Bakiyev, who fled the country. Explanations for the causes of the violence are contested, but ethnic tensions in the region reach back to at least 1990, when police and armed Kyrgyz men attacked Uzbeks in Osh in the wake of the Soviet Union’s dissolution. These tensions had an economic component as well. During the Soviet era, Uzbeks who lived in southern Kyrgyzstan flourished economically by leveraging old trading networks unavailable to the traditionally nomadic Kyrgyz, who were largely herders. Following the dissolution of the Soviet state, successive Kyrgyz governments have encouraged a muscular, ethnic-based nationalism.

The newly placed leadership in Bishkek, however, has been eager to show that its June 27 vote on a constitutional referendum that ratified the country’s post-coup administration was supported by its minority Uzbek population, including those who had fled the violence in Osh. But less widely reported in the weeks following the Osh conflagration was the pressure exerted by the Karimov government on Krygyz refugees reluctant to return home. Simply put, Karimov has long feared that an influx of Uzbeks from across the border would have the potential to destabilize his rule — and thus made sure that beyond the bare minimum of temporarily accepting fleeing women and children, the border remained closed. All 100,000 refugees returned to Kyrgyzstan within a couple of days. According to an Uzbek nurse who was present in the refugee camps and reports from human rights organizations in Kyrgyzstan, Uzbek security forces threatened to tear up refugees’ passports and intimidated relatives who live in Uzbekistan.

Yet Uzbeks in Kyrgyzstan who continue to fear for their safety have reported being turned away by both Kyrgyz and Uzbek border guards. And since the return of refugees to Osh, organizations like Human Rights Watch have documented continuing abuse of Uzbek men taken for interrogation in police stations in Kyrgyzstan. Across a region deeply sensitive to the politics of ethnic identity, the events have triggered intense debate and alarmed ethnic Uzbek populations across Central Asia — except, seemingly, in Uzbekistan itself.

Uzbeks [in Uzbekistan] have other things on their minds than the atrocities in Osh — unless they have relatives in Osh, and many do — and I’m not sure how much they even knew of what transpired because the censorship in the country. Given Karimov’s clear intention to stay out of it, Uzbeks aren’t going to talk about it,” says Commercio.

When I drove in late July through Xojobad, a dusty settlement with a vibrant open-air candy and fruit bazaar about 30 miles from the closed border with Kyrgyzstan and the last sizable town before the border checkpoint, uniformed police were stationed about every 100 feet along the main road. In a nearby village called Khojobad, a worker named Gahongar in a tea house warmly invited me to sit with him. He stopped smiling when I asked for his opinion on the violence in Osh; he literally walked away when I asked about the refugees.

In nearby Andijan, the restive, religiously conservative city where Uzbek security forces opened fire on anti-government protestors in 2005, an activist university student open to discussing ongoing human rights abuses in the country refused to comment on the situation in Osh, citing the danger in merely speaking on the topic and the lack of reliable information due to the near-total media blackout imposed by the Uzbek government.

But Karimov’s ability to minimize knowledge of the scope of the incendiary turmoil around Osh doesn’t pertain only to Uzbek citizens. According to a former highly placed Uzbek government official, he has also “convinced a sizable group of embassy-types that by closing its border and forcing the refugees back to Kyrgyzstan whether they like it or not is a sign that they’re going to be more cooperative with the West in the future, and that’s not necessarily the case.”

“I think Osh has demonstrated to the international community that Uzbekistan can accept international norms when they choose to do so, at least by local standards,” says Martha Brill Olcott, a leading Central Asia expert and a senior associate at the Carnegie Endowment for International Peace, in Washington. “The return of the refugees really works for both sides: It allowed the interim Kyrgyz government to demonstrate they intended to be a government of national consolidation, and it took away the problem for the Uzbeks, which was under what criterion they would accept the husbands of these people and risk letting in Uzbek men in who have more radical views than their own Uzbek population.”

The bonus for the Uzbekistan government is international acclaim for accepting the refugees, but Karimov’s real gain is the time and space to further entrench his authoritarian rule. For the refugees caught between a rock and a hard place, there’s little to cheer about.

A travel grant from The Investigative Fund at The Nation Institute, now known as Type Investigations provided funding for Ilan Greenberg’s reporting in Uzbekistan.