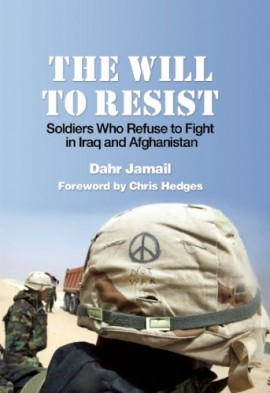 The Will to Resist: Soldiers Who Refuse to Fight in Iraq and Afghanistan (2010) by Dahr Jamail

Dahr Jamail, author of Beyond the Green Zone, brings us inside the movement of military resistance to the occupations of Iraq and Afghanistan. Since 2006, a majority in the United States have opposed the continued occupation of Iraq, and increasing skepticism surrounds the escalation in Afghanistan. But how do the soldiers who carry out the American occupations see their missions?

Fragmented reports of battalions refusing orders, of individual soldiers refusing redeployment and taking a public stand against the occupations have trickled into the mainstream reportage over the last five years. But how deep does the current of resistance run? What makes soldiers decide to go AWOL, file for conscientious objector status, and even serve sentences in military prison for their acts of refusal?

Dahr Jamail’s comprehensive study of today’s military resisters sheds new light on the contours of dissent within the ranks of the world’s most powerful military.

Praise for The Will to Resist:

“Jamail’s human portrait of the men and women who turned away from the project of empire should serve as a beacon.” —Chris Hedges

“Dahr Jamail is one of very few journalists who have displayed the courage — physical, intellectual, and moral courage — to tell the truth about the invasion of Iraq. In this outstanding book, he describes the often secret resistance within the US military.” —John Pilger