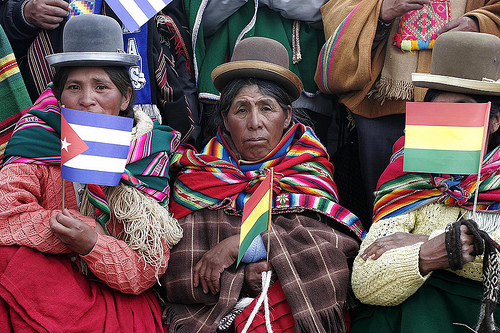 Juan Justiniano and 700 other indigenous men, women and children have been marching more than nine weeks from their home in Bolivia’s Amazon basin, headed to the capital La Paz. They’re protesting plans for a highway that would dissect their lands, and they’ve faced scorching sun, driving rain and police brutality along their 375-mile (605 km) trek. But what pains them more is knowing that the man they call their antagonist — President Evo Morales, an Aymara Indian — is Bolivia’s first indigenous head of state. “It’s unfortunate,” says Justiniano, 26, a Moxeño Indian, breathing hard as he strides through the Yungas Valley north of La Paz, “that a supposedly indigenous government is forcing a project that will ruin our home.”

Though their numbers are relatively small and their sandaled feet blistered, Justiniano and his cohort have ruined the southern hemisphere’s spring for Morales. In fact, their main grievance — Morales’ proposed highway through their pristine Amazon territory, a protected reserve that’s home to 11 endangered animal species and three ethnic groups battling extinction — has sparked one of the most serious challenges yet to the leftist President’s five-year rule. Amid images of hundreds of Bolivian police beating indigenous marchers — many carrying symbolic bows and arrows — taping women’s mouths and even spraying children with tear gas, says Karen Hooper, an analyst for the private, Texas-based intelligence agency Stratfor, “the stage is set for a period of real turmoil.”

And it’s a stage Morales hardly expected to face. His usual foes are Bolivia’s white, conservative economic elite in the east, whose stratagems he’s almost always overcome while emerging politically stronger. But he has rarely, if ever, been confronted by a mass movement demanding he live up to his own indigenous and environmental ideals. Morales is one of the most vocal heads of state pushing industrialized nations to take steps to curb climate change; Bolivia last year even drafted the U.N.’s historic right-to-water resolution.

Yet when it comes to domestic policy, critics say Morales has been inconsistent if not hypocritical. He has unabashedly expanded mining and other extractive industries in the name of both growing the economy and funding popular social programs in South America’s poorest country. His government often prioritizes energy and infrastructure projects over preservation of precious ecosystems like the indigenous territory of north-central Bolivia known by its Spanish acronym TIPNIS — a vital link between the Andes and the Amazon that environmentalists fear could be overwhelmed by mass agriculture, logging, oil exploration (there are known deposits there) and pollution if Morales’ proposed highway is allowed to cut through it.

Even so, the issue was barely on the national radar screen until mid-August, when TIPNIS residents like Justiniano began their long march on La Paz. Six weeks later, it became an international cause célèbre when some 500 police officers began converging on them. “We had to run into the forest to escape,” one of the marchers, Matilda Vargas, told TIME. Most of Bolivia recoiled. Morales’ Defense Minister, Cecilia Chacón, resigned in protest and demonstrations against the repression paralyzed the country for days. Morales’ approval ratings plunged into the 30s. He moved quickly to repair the damage, denying he gave the order for police intervention, publicly apologizing to the victims and their families and rushing through legislation suspending the highway’s construction until TIPNIS residents can be consulted on the project.

But it seemed too little too late. “We will accept nothing less than the cancellation of the highway,” says Fernando Vargas, head of the TIPNIS community association. Vargas says the group is not opposed to a road linking economically important Beni and Cochabamba states, but he insists it can’t tear through the heart of the reserve. “The government has refused to consider all the alternative proposals,” he adds. The government in turn says it hasn’t received “viable” alternatives, but it hasn’t explained why it thinks other plans aren’t workable.

Either way, Morales’ recalcitrance in the face of a political avalanche is baffling. The marchers believe the President is appeasing his principal base, the coca growers of the Chapare region that borders the reserve. For years, cocaleros have encroached on reserve land, and residents fear the highway will let the growers expand their plantations more easily.

Morales argues the road is meant to modernize an impoverished nation that desperately needs development. But Silvia Molina, a researcher with the Bolivian Environmental Forum, says, “The government has never given details as to what vital benefits this road offers that could outweigh the environmental and social costs.” Molina, like other skeptics, also wonders aloud about Brazilian interests: 80% of the $332 million highway, which could serve as a key route for moving Brazilian goods to Pacific ports, is being financed by Brazilian development bank BNDES and is being built by the Brazilian construction firm OAS. La Paz and Brasília deny such motives.

To the contrary, Morales claims — as he is wont to do — that TIPNIS protesters are part of a destabilization plot against his government. In August, Morales produced records of phone calls between the march leaders and a U.S. embassy employee. Since then, the list of supposed provocateurs has grown to include foreign NGOs and opposition party politicians. While there is little evidence of a conspiracy, Bolivia’s right wing does appear to be licking its chops as Morales takes blows from erstwhile allies. Opposition politicians — hardly the friends of folks like TIPNIS residents — are suddenly attending marches and making pleas for “indigenous rights.” The country’s largely opposition media has made the TIPNIS uprising front-page news, depicting the marchers as heroes. “When I protested like this they called me a terrorist,” Morales said reprovingly.

Morales’ supporters are convinced of a right-wing conspiracy as well. They held a large progovernment rally in the capital last week, and it was well attended by Bolivia’s highland indigenous people. But TIPNIS’ lowland indigenous inhabitants say they’re not looking for a civil war. “We want to sit down and talk with Evo, not bring down his government,” says Justiniano, a farmer and fisherman, expressing his own frustration that Morales’ conservative foes are exploiting the TIPNIS protests. Still, he says their bows and arrows may not remain so symbolic if Morales pushes ahead with his highway and residents have to “defend” their reserve.

They still have to make it to La Paz, however — not an easy task on foot for Amazon denizens who’ve rarely, if ever, experienced the capital’s altitude of 12,000 ft. (3,700 m). And with the physical test comes an emotional one: “In 2005, I marched in support of Evo Morales with this flag,” says TIPNIS resident and Chiquitano Indian Fernando Garos, 30, holding up a tattered Bolivian banner. “My heart is heavy because today I carry this same flag as I march against him.”

Jean Friedman-Rudovsky’s reporting from Bolivia was supported by The Investigative Fund at The Nation Institute, now known as Type Investigations.