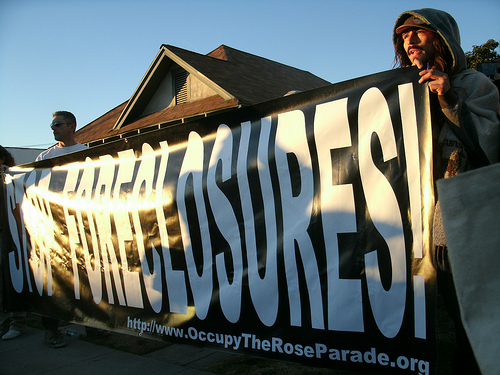 The first slide was cryptic. QUIET TITLE: THE NEW AMERICAN REVOLUTION, it said. The presenter, a former real estate broker named George Mantor, promised the words would make sense by the end of the two-hour workshop. “The revolution takes learning,” said Mantor. He was a wiry man in cowboy boots with a sunburned nose and hands that shook, and he described himself as a member of the National Homeowners Cooperative, a group dedicated to fighting foreclosures and shifting the burden of mortgage debt “back upon the shoulders of those who invented it — Wall Street and the greed we all see manifested there.”

Mantor advertised the free event, which took place last March at the public library in Ramona, California, as an opportunity for those in attendance to join the NHC and become the “brave pioneers” who would “take on big banks and win.” About twnety people, old men and their old wives and a few younger people, had shown up. Many had either lost their homes or were about to be foreclosed upon.

Mantor's first recommendation, per slide No. 21, was to STOP KIDDING OURSELVES. “We are no longer a nation of laws,” he said. “America's greatest asset, its middle class, is being intentionally destroyed. And elections are not the answer. Voting,” he said, “is like playing patty-cake with a man holding a machete.” Household net worth was down $12.3 trillion since 2007; the country ranked forty-eighth in life expectancy worldwide; one half of all American children were expected to live on food stamps sometime in their lives. Our pensions were upside down and sinking, our 401(k)s were now “201(k)s,” our home values could fall 25 percent or more in the coming years.

“Now how is it possible,” asked Mantor, “that Wall Street is an island of prosperity in this great sea of poverty? Is this what we want?”

“So how the hell did we get here?” asked Mantor, before launching into a breathless history of banking deregulation under Ronald Reagan; how it accelerated in the 1990s under Bill Clinton; how the Gramm-Leach-Bliley Act of 1999 dropped the barriers that barred commercial banks from taking on the risks of investment banks; how the Commodity Futures Modernization Act of 2000 allowed for the proliferation of derivatives markets; how derivatives formed an “avatar economy,” a system of illusory value built atop the real economy, in particular the economy of the edifices in wood and brick and stone that people like us bought and sold and called home.

To read the rest of this article, please visit Harper's.

Christopher Ketcham, a freelance writer, has written for Vanity Fair, Harper’s, The Nation, and Mother Jones, among others.