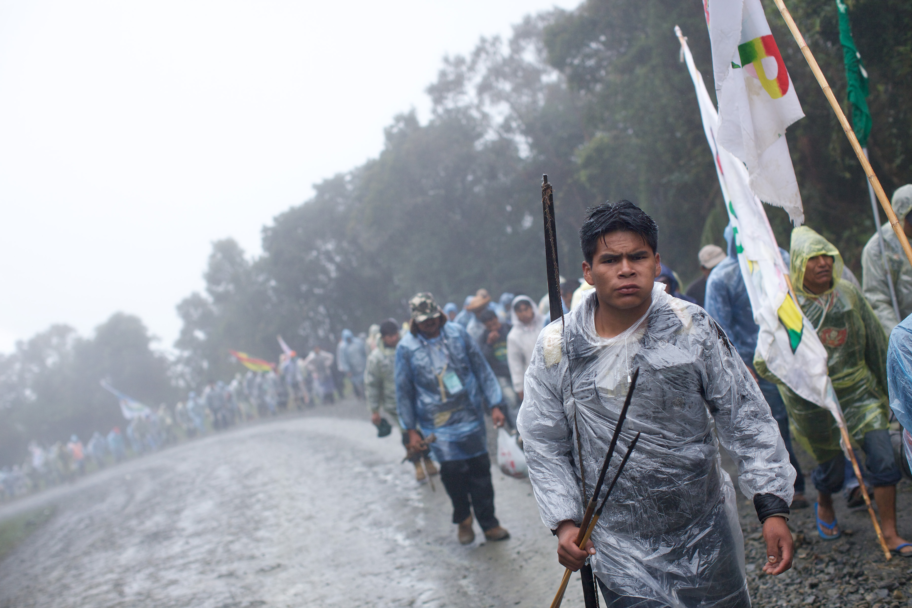 Indigenous groups endured rough weather and camped in the Yungas valley during their protest march earlier this spring from their jungle communities to the capital of Bolivia, La Paz. But the struggle initially appea... | Credit: NOAH FRIEDMAN-RUDOVSKY

Carmelo Aguilera steadies the dugout canoe as his 11-year-old son, Juan Gabriel, stands precariously and aims his bow and arrow toward the Secure River below. “Fish flesh makes better bait,” says the boy, explaining why the dawn expedition begins with a hunter’s weapon rather than a hook and line.

Deep inside Bolivia’s Isiboro Sécure National Park and Indigenous Territory, known as TIPNIS, the Aguileras live more than 30 hours by boat from the nearest city, surviving mainly on fish and a few homegrown crops. “The river is our lifeblood,” says Aguilera, 62.

Bolivia has been embroiled in conflict for the past year over the planned construction of a 182-mile highway, 32 miles of which would cut through TIPNIS, a vital ecosystem — located at the geographic heart of South America — that links the Andes and the Amazon basins. The road would be an important addition to Bolivia’s woefully undeveloped highway system. Yet environmental studies predict that the project will cause widespread damage, contaminating the park’s three main rivers, opening large areas of forest to illegal logging and settlement, and altering habitats that are home to 11 endangered species and rare primates. All that would threaten the traditional way of life of the reserve’s three dwindling indigenous cultures — the Tsimanes, Yuracarés and Mojeño-Trinitarios.

“Our future,” says Aguilera, a Yuracaré elder, “is uncertain.”

The controversy has brought Bolivia to a crossroads, one that is emblematic of the complex choices over development now confronting much of South America. Bolivia’s highway project is part of a Brazilian-led effort commonly known as IIRSA, or the Initiative for the Regional Integration of South America — a vast network of 531 mega-projects including hydroelectric dams, highways, bridges, and electrical power systems that seeks to propel the continent into the 21st century. Although these projects are filling a major infrastructure void, most are being constructed within the fragile ecosystems of the Amazon basin, which environmentalists warn could do irreparable damage to the world’s largest tropical forest.

If built, the TIPNIS road would likely be a major transport route for moving Brazilian soybeans to Pacific ports for shipment to China. Brazil’s oil giant, Petrobras, also holds exploration rights inside TIPNIS near the planned highway. This has prompted critics to charge that the TIPNIS road and other IIRSA projects are designed primarily to benefit Brazilian industry rather than to provide economic and social advancement for the people of Bolivia and the Amazon basin. To deflect growing criticism over IIRSA, Brazil has vowed to give greater weight to the environmental and social aspects of these megaprojects and has recently renamed the effort the South American Council on Infrastructure and Planning, or COSIPLAN.

The controversy over the TIPNIS road, which has involved marches by indigenous groups to the capital and clashes with police, has proven to be a political minefield for President Evo Morales, Bolivia’s first indigenous head of state. Morales has gained an international reputation as a modern day Captain Planet: As a staunch defender of pachamama, or Mother Earth, he has bounded from United Nations meetings to global summits lambasting the developed world for wreaking environmental havoc with its insatiable appetite for oil and consumer goods. He has also consistently called for consultation with indigenous people affected by development projects.

Unfortunately, Morales did not heed his own advice, expressing support for the TIPNIS road without consulting the park’s indigenous people. The plan, which has been on the country’s drawing boards for more than a decade, had always been popular among most Bolivians. But after being slighted by Morales, 1,000 people, including several hundred from the park, marched 350 miles in August 2011 to the capital of La Paz in protest. Popular sentiment started to turn against the highway, in part because the police clashed with the group halfway through their journey. Fearing for his presidency, the Bolivian leader canceled the project soon after the march reached La Paz.

By early this year, however, the plan was back on the table, with Bolivian officials arguing that the TIPNIS road is vital for South America’s poorest nation. “The majority of the population needs integration and needs transport for their goods,” says Vice-Minister of the Environment Beatriz Zapata. Indeed, in a country almost three times the size of Montana, only one east-west paved highway exists, and it’s impossible to drive from north to south in Bolivia without encountering long stretches of dirt road. By slicing straight through TIPNIS, the proposed highway would cut current travel time around the park from 15 hours to about one hour, easing transport and connecting the country’s economic center of Santa Cruz with isolated northwest Bolivia.

The Morales government is now in the midst of a three-month consultation period with the indigenous people of TIPNIS, determining whether the road can be built in a way that would mitigate its environmental and cultural impacts. “We are moving from a purely conservationist vision onto one that integrates it with development,” says Zapata.

Residents of the 4,000-square-mile park are highly polarized, with the indigenous people of the north — whose ancestors have been living in this area since before the colonial conquest — generally against the road. They are families like the Aguileras, who live off the river and have minimal contact with life outside the park. Given the possible impact of the road on their forests, wild game, and rivers, Delmi Morales Nosa, a Yuracaré mother of two, says, “Our entire way of life will be changed.”

Some TIPNIS residents do express frustration with their isolation and lack of transport options. To help his frequently ill wife, Carmelo Aguilera must row several hours to the nearest health clinic, which is third-rate and poorly stocked. TIPNIS’ largest town, Gondonovia — with 84 families — has the only high school in the park’s northern half, so students are forced to either drop out or board at the school. Residents dread the dry season when they are rendered virtually immobile because portions of the rivers get too low to navigate. “It’s not that we’re against development,” said Matilda Vargas, another TIPNIS resident, during last year’s march to La Paz, “but development has to bring us tangible benefits.”

In fact, says Silvia Molina, of the Bolivian Forum on the Environment, aside from cutting transport time for some goods, “there have been no studies quantifying the economic benefit of the highway for Bolivia. So we have no way of gauging whether the benefits are worth the environmental and social costs.” Molina said that in addition to Brazilian business interests, supporters of the road include large landowners poised to expand ranching and agriculture into areas the highway would make accessible. “This highway is for the interests of big business,” Molina concludes. “We need development that is sustainable and prioritizes the needs of the people.”

Many scientists and conservationists say the planned road will irrevocably alter TIPNIS. Already, coca growers in the south of the park — who staunchly support the road — are making incursions into TIPNIS.

“The construction of the highway would be a mortal blow to the entire ecosystem,” says biologist Percy Bautista of Bolivia’s largest public university, the Higher University of San Andres, in La Paz. Most of the impact, he says, will come as the road paves the way for unrestrained human activity inside the park’s remote and most densely forested region.

A never-released study written by an offshoot of the Bolivian government’s Forestry Service predicts that for every mile of paved roadway, up to six square miles will likely be deforested for a new agricultural frontier based mainly on coca. Just south of the park is the Chapare, Bolivia’s second-largest coca-growing region and in recent years these farmers have all but transformed the park’s southern half from communities that relied on subsistence agriculture to a dependence on coca as a cash crop. Coca growing is legal in Bolivia, although it is illegal inside the park. The government repeatedly promises to crack down on coca farmers in TIPNIS, but has lacked the capability — or the will — to stop the incursion. (Chapare farmers are President Morales’ base, and he still holds his long-time post as president of their coca-growers union).

Coca growers typically slash and burn forests to prepare them for a crop and then reap numerous annual harvests: Bautista calls intensive coca cultivation “the agricultural equivalent of mining,” leading to severe erosion of soils into creeks and rivers. That, plus the pollution and waste from farms, human settlements, and vehicles, poses a major risk to thriving fish populations in the Isiboro, Secure, and Ichoa rivers, says Bautista.

Increased illegal logging, the unpublished government report concludes, will likely be another inevitable consequence of the highway. While sustainable forest management is legal in the park, Bautista notes that a paved road through TIPNIS could lead to a virtual free-for-all for loggers. The Bolivian government has rarely been able to safeguard nationally protected areas from such onslaughts, and with only 19 rangers and no police force inside the entire TIPNIS territory, it’s unlikely this will change.

Finally, all this will take its toll on the park’s animals and wildlife habitat, the report concludes. Several of TIPNIS’ species are valuable black market commodities, including caimans, jaguars, and rare primates, and a highway will inevitably spur increased hunting and wildlife trafficking. “The destruction will grow, little by little, from the highway outwards,” says Bautista.

Critics of the road are skeptical of the government’s newfound openness to alternatives, given that the Morales administration has been loathe to consider any proposal other than the original plan that cuts through the heart of the park. Ironically it might never have come to this standoff had Morales initially consulted with TIPNIS residents and won them over. “He was their hero,” says a source who has worked inside TIPNIS for years, “and he took that popularity for granted, assuming they’d never seriously oppose his plans.”

But now their anger is visceral. Following their most recent march to La Paz this past winter, the highway protesters were ignored by the government for two weeks as they slept on La Paz’s frigid streets. They returned to their territory vowing to defend it at all costs: “With bows and arrows, what else?” said Mariano Nogales Rocha.

Research support for this article and video was provided by the Investigative Fund of the Nation Institute.

Noah Friedman-Rudovsky is an independent photojournalist and videographer based in Havana, Cuba.