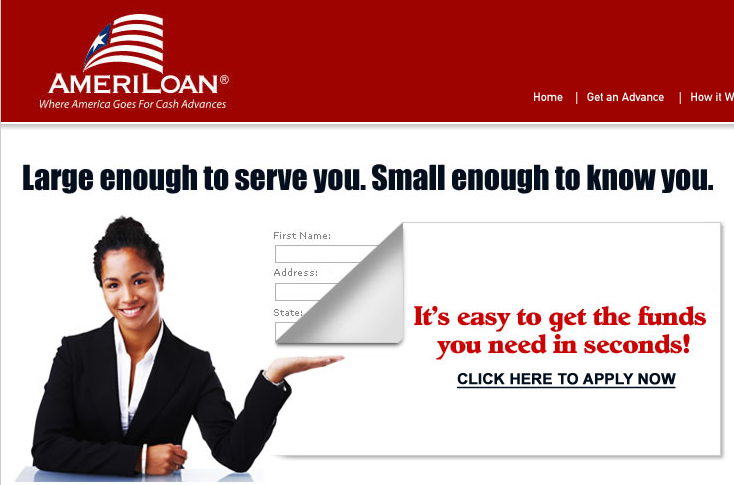 Ameriloan, which also does business as AMG Services, is being sued by the FTC.

Payday lenders have a lot in common with pawn shops, their close cousins: They depend on lending money to desperate people living close to the edge with nowhere else to turn. They first surfaced about 20 years ago in the South and Midwest, often as small mom-and-pop shops. Now the industry is dominated by large national chains, with some 20,000 storefronts nationwide. Coming out of the shadows of cyberspace, however, are Internet lenders, which are like storefront lenders on steroids.

The average payday loan is tiny, about $400, and in the benign view of the industry, it gives customers with trashed credit scores, who lack other credit options, emergency cash until their next paycheck arrives. But according to the Center for Responsible Lending [1], lenders charge a mind-boggling 391 to 521 percent interest for loans that have to be paid off in two weeks, often triggering a toxic cycle of debt, as borrowers take out fresh loans to cover the old ones. Internet loans are bigger, generally charge a higher annual percentage rate and, consequently, are more expensive than their storefront counterparts.

As non-banks, payday lenders have so far escaped federal regulation, leaving a hodgepodge of state laws as the only bulwark against these usurious loans. If the storefront lenders have been hard to regulate, Internet lenders have been even harder to find, as they make loans to lenders in states where they’re banned by setting up servers offshore or in states where they are legal. Industry experts put the number of online lenders in the hundreds, so far, but one website can reach many more people than a storefront. A January report from San Francisco-based JMP Securities estimated that market share for Internet lenders would hit 60 percent by 2016.

Some attorneys general in states with payday bans, like New York and West Virginia, have sued individual lenders for targeting residents in their states. A 2009 settlement by then-Attorney General Andrew Cuomo with two out-of-state Internet lenders was one of the few cases to force lenders to make restitution to scammed borrowers — 14,000 of them. But the lenders simply resurfaced in some other form.

Richard Cordray, chief of the new Consumer Financial Protection Bureau, has pledged to focus on the industry and held a public hearing on payday lending last January in Birmingham, Alabama. Yet he has been mum on new enforcement plans as the politically besieged bureau sets it sights on more mainstream products such as mortgages, credit cards and student loans.

But could the Federal Trade Commission come to the rescue? Established in 1913, the FTC has recently watched the CFPB steal some of its thunder, but it may be on the verge of not only holding these lenders accountable but also possibly shutting them down.

The FTC began suing cyberspace lenders about five years ago in a flurry of cases, mostly related to fraud or failure to disclose loan terms. Websites came with deceptively labeled buttons that led you to falsely advertised products. One wrong move with your mouse and you just paid $54.95 for a debit card with a zero balance when you thought you were getting a payday loan, witness FTC vs. Swish Marketing [2]. One of the most spectacular examples is the FTC’s recent suit against call centers in India, such as American Credit Crunchers, LLC [3], that harassed people to repay Internet payday loans they had never even taken out — sometimes even threatening people with arrest. The FTC alleged that the defendants fraudulently collected more than $5.2 million in payments on these phantom loans.

But a new FTC case [4], against Kansas-based payday lender AMG Services Inc. (also doing business as Ameriloan), may set a precedent that topples this house of cards. Earlier lawsuits sanctioned lenders, but didn’t prevent them from returning to the same scams once they settled with the government. What’s different about the AMG Services case is that the FTC goes after the foundation of Internet payday’s business model — the demand that borrowers give lenders access to their checking accounts as a condition of getting a loan. Once the lenders had control of the accounts, they had unfettered access to the borrower’s money and could withdraw money at will — something that borrowers typically don’t understand when they accept the loan. The borrowers were powerless to put a stop to this once they realized what was happening.

“The defendants told consumers that the total amount required to repay the loan will be the amount borrowed plus a one-time finance charge to be automatically withdrawn on a single date,” said Nikhil Singvhi of the FTC’s bureau of consumer protection and lead attorney on the case. “But contrary to those representations, the defendants initiated multiple withdrawals from the consumers’ bank account, assessing a new finance charge each time.”

Stopping the withdrawals was futile. “Consumers would call their bank and say I don’t want these withdrawals processed anymore,” Singvhi says. The bank would request a letter revoking that authority — sent to the bank and the lender — and still the withdrawals kept on coming.

For example, one plaintiff in the suit took out a $300 loan, expecting to pay back the principal, plus a $90 fee, in two weeks. Instead, the lender withdrew a $90 fee for each of the borrower’s next four pay periods, without touching the loan principle. After that, the principal was drawn down in small increments, always with more accompanying fees. By the end, the payments totaled $975. That’s $675 in fees instead of $90 — an extraordinary windfall when factored out across countless loans. Many consumers closed their accounts in desperation.

If the FTC wins its case, the impact on the lenders’ cash flow — and profits — will be significant, if not extreme. If the ability to extract payments by means of electronic funds transfers that extend the life of the loan while fees rapidly mount is what this industry is built on, there could be an industrywide shakeout from which the industry may not recover.

The FTC suit alleges that requiring payment by means of an electronic funds transfer is itself a violation of the 1968 Electronic Funds Transfer Act, which forms the basis of their case. “I think they’re on solid ground,” said Moira Brennan, head of the New York City-based Brennan Law Group, which handles consumer issues. “The Act states that you can’t require an electronic funds transfer as a method of payment.”

Lauren Saunders, managing attorney for the National Consumer Law Center, says the ETF Act would not apply if lenders closed customers’ loans on a single withdrawal, covering both principal and fee. But once they make multiple withdrawals, the Act is violated. And those multiple withdrawals that don’t touch the principal are exactly what make Internet payday loans so profitable. As Saunders says: “Many, if not most, Internet payday loans are structured to pay only the fee at regular intervals for a period of months before the loan is repaid.”

The Online Lenders Alliance, an industry trade group, has no doubt smelled a public relations problem and is coaxing member firms to install a button on their websites for customers to click if they think they’ve been victims of fraud. It is a “public awareness campaign,” says OLA spokesperson Peter Barden, who believes that there is nothing wrong with this industry that the industry itself can’t fix. Customers, he says, “could click through to an OLA Web page that would report it.”

Barden could not say how complaints would be acted upon and couldn’t identify any members who had added the button. But identifying a few bad apples is beside the point. If this source of profit disappears because the FTC prevails in its suit, there could be little — if anything — left to reform.

For years, consumer advocates have witnessed federal inaction and failed attempts at the state level to rein in the industry. Perhaps the FTC will begin to provide results.

[1] according to the Center for Responsible Lending: http://www.responsiblelending.org/payday-lending/tools…/fast-facts.html

John Sandman has been writing a wide variety of journalism and fiction for nearly 50 years.