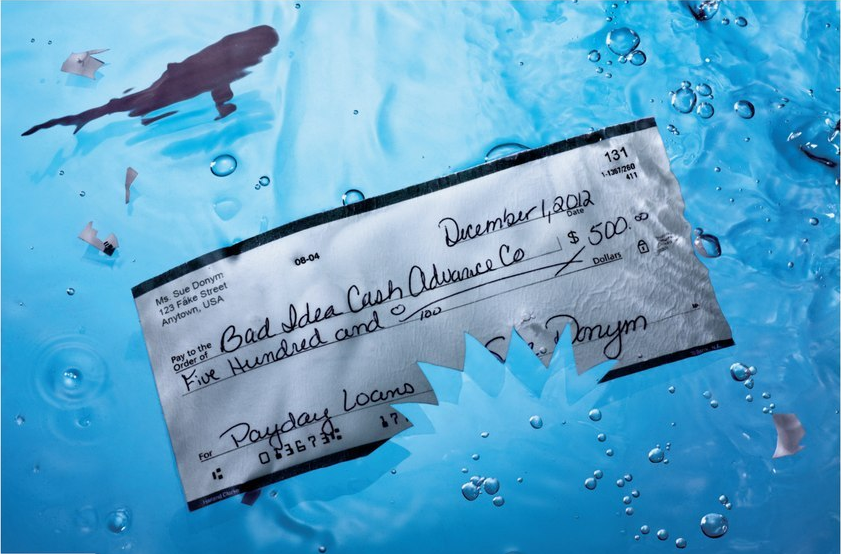 Mary Love wants you to know: You don’t have to be poor to be a victim of payday loans.

Love, 67, is a divorced LaGrange, Kentucky, resident and a minister in the Presbyterian Church (USA). When she got her first payday loan, in 2003, she wasn’t destitute; she was working for UPS Logistics in Louisville. But she’d fallen behind on her rent.

Her first loan was for $200. She doesn’t recall the name of the place that sold her the short-term cash advance. “They were everywhere,” she says of the storefront operation. Love wrote a check for $230, including the $30 fee for the cost of the loan. The lender handed her $200 in cash. Two weeks later, Love came back to retrieve the check and repay the loan in cash.

Now, though, she was out of money again. So she wrote the store another check, but for twice as much — $460, including a $60 finance charge for the second loan — because she needed to pay off other bills. This cycle of repeat borrowing spun on for months. By the end of the year, Love says, she’d spent $1,450 in fees. Two years later, with the debt still churning and no end in sight, Love was living rent-free in her sister’s basement and relying on temp work to pay off the loans.

With more than 20,000 locations in 33 states, storefront payday lenders, like the one Love used, are familiar sights. But people seeking quick cash now have other options: Nationwide, borrowers can go online to find Internet payday lenders; in all but 13 states, traditional banks, including Wells Fargo and U.S. Bank, offer payday-style loans. All three avenues lead to a similar kind of high-cost credit: short- term loans with sky-high interest rates that typically must be fully paid of in two weeks. Storefront operations require borrowers to submit a postdated check, which is deposited two weeks after the loan is made (in theory, a borrower’s next payday).

Internet and bank lenders demand even more: Borrowers must give checking account access to lenders, who can withdraw money as soon as it is deposited. Payday loans are billed as quick cash advances to help borrowers deal with money emergencies between paychecks. Some 19 million Americans use storefront and Internet lenders, spending well over $7 billion a year on fees, says Richard Cordray, the head of the new Consumer Financial Protection Bureau (CFPB), which has supervisory authority over the industry. But it can be a grievously expensive form of credit. According to a 2012 report from The Pew Charitable Trusts, the average borrower takes out eight loans per year at $375 each, paying about $520 in fees alone. That’s bad enough for someone with a regular job, but even worse for retired people on fixed incomes. The Center for Responsible Lending’s 2011 report on payday loans estimates that fully a quarter of bank payday-loan borrowers are on Social Security.

Lenders aren’t supposed to require an assignment of government benefits as a condition of granting a loan. But consumer advocates believe that lenders covet borrowers on Social Security because their income is more secure than that of working borrowers. “Seven out of nine chains that we surveyed said they would make loans to people on unemployment, disability or Social Security,” says David Rothstein, author of a 2009 study on payday lending for Policy Matters Ohio. “Those are some of the most vulnerable people in the state.”

Payday lenders also aggressively collect debt from borrowers who bounce checks, even garnishing (seizing) Social Security benefits. Technically, the 1935 Social Security Act bars creditors from garnishing benefits. But because the transaction usually takes place between the lender and a local bank, it often escapes regulatory notice. That’s what Randy Morse of Lynchburg, Virginia, discovered when a local Allied Cash Advance outlet threatened his 96-year-old mother with garnishment last March. She had fallen behind on a loan she’d taken out the previous September.

According to Matt Kadlec, a credit counselor at the Financial Information & Service Center in Menasha, Wisconsin, borrowers face garnishment after missing multiple payments. “Typically, we’d wait for three months before we went to court,” says Kadlec, who once worked for the Indiana-based payday lender Cash Tyme. “The only way we would even go to the courthouse was if we knew that the person still had some type of income.”

In May 2011 the Treasury Department introduced a new regulation that identifies exempt deposits, including Social Security benefits, when they appear on a bank employee’s computer screen, telling the bank that these funds cannot be garnished. “Before, the bank would typically say, ‘It’s not up to us to decide whether funds are exempt.’ Then they’d get a garnishment request and freeze your account,” says Jay Speer, executive director of the Richmond-based Virginia Poverty Law Center. “You’d have to go to court to prove they were exempt. Meanwhile, your account is frozen and you can’t withdraw money to buy food. Now the garnishment is prevented without having to go to court. It’s making the banks do what they should have been doing all along.”

While the regulation should make it harder for storefront lenders to garnish borrowers’ benefits, banks that make payday-style loans wouldn’t have the same difficulty. Five banks — Wells Fargo, U.S. Bank, Fifth Third Bank, Regions Financial and Guaranty Bank — are now making payday-style loans to account holders who have benefits deposited directly into their accounts. None of these credit products are called payday loans — or loans, period; most are branded with the words like advance, such as Wells Fargo’s Direct Deposit Advance, which Wells Fargo spokeswoman Richele Messick calls “a creative way for customers to have advance access to their next deposit.” But the terms of this kind of credit are nearly identical to the loans offered at storefront operations, including triple-digit interest rates and two-week “payday” maturities due on the next direct deposit.

“This [new Treasury regulation] doesn’t solve the problem of bank payday lenders’ getting first access to your money,” says Julie Nepveu, senior attorney at AARP Foundation. AARP has supported the efforts of several states to tighten regulations to protect recipients of Social Security against garnishment. “We and other consumer advocates think this kind of arrangement with your bank leads to an unlawful assignment of your Social Security benefits.”

It’s this kind of exploitation that the CFPB was created to address. But while the CFPB has authority over storefront and Internet lenders and has begun examination procedures, it has no authority to cap interest rates. CFPB spokeswoman Michelle Person would not comment on the issue of rates or payday-loan regulation. “We are in the information-gathering stage of our work,” she says, “and we cannot prejudge this issue.”

For Mary Love, escape from the debt trap wouldn’t come for several years. In 2005 she saw a billboard advertising the debt-relief referral services of the Red Cross, which put her in touch with the Consumer Credit Counseling Service. That led to a pay-off plan; she finally emerged from the debt in 2007. The total pay-off, she believes, was “way into the thousands.” Years later, she doesn’t think she’s fully recovered.

1. To prevent your assets from being garnished, don’t take out loans that must be paid from your checking or savings account or prepaid debit card. Don’t have your Social Security payments sent to the same bank where you have loans that are automatically paid from your checking or savings account. Avoid taking out loans from banks that are linked to a checking account where you receive benefits by direct deposit.

3. Avoid loans that promise to improve your credit score or come with onerous fees or terms you don’t understand. Many factors influence your credit score, and taking out subprime loans can actually hurt your score. Never pay an advance fee to get credit.

4. Seek alternatives to using payday lenders, including social service and faith-based organizations. If you’re on Social Security, you might be eligible for help with food, rent, mortgage payments, energy bills or cash assistance that you don’t have to repay. To get help with improving your credit and finding alternatives to payday lenders, meet with a reputable nonprofit credit-counseling agency that is a member of the National Foundation for Credit Counseling (NFCC).To find one, contact the NFCC at 800-388- 2227 or online at nfcc.org. —J.S.

John Sandman has been writing a wide variety of journalism and fiction for nearly 50 years.