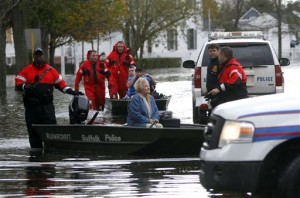 Seniors in New York City were more likely to die as a result of Hurricane Sandy. | Credit: The New York World

In 2005, after Hurricane Katrina, Mayor Michael Bloomberg proposed a registry that would allow disaster responders to know where to find people most urgently in need of aid. But he does not appear to have followed through.

Police in the Rockaways found the drowned body of 90-year-old George Stathis lying between a couch and the wall in his Belle Harbor basement five days after Hurricane Sandy. In Staten Island, Jack Paterno, paralyzed from cerebral palsy, was helpless to escape as floodwaters rushed into his bungalow.

They were just two of the aged or disabled New Yorkers who perished in Sandy. Nearly half of the 43 New Yorkers who died from the storm were elderly, a rate almost four times higher than senior citizens’ share of the city population. Many more disabled and homebound city residents were stranded for days and even weeks without vital medical equipment and care.

Most had remained in mandatory evacuation zones during the storm, without emergency responders’ knowledge.

A disaster preparedness commission convened by Gov. Andrew Cuomo has since recommended the creation of a special needs registry to ensure that frail seniors, the disabled and homebound would not be left behind in a disaster.

“Having that robust kind of registry is the kind of thing that could save lives,” said Dr. Irwin Redlener, the director of the National Center for Disaster Preparedness and co-chair of Cuomo’s commission.

But the idea of special needs registry is not a new one for New York City. In 2005, in the wake of Hurricane Katrina and running for his second term, Mayor Michael Bloomberg proposed a registry that would allow disaster responders to know where to find people most urgently in need of aid.

New York state law also calls on cities and counties to develop comprehensive disaster preparedness plans and recommends that the plans include voluntary registries of people with disabilities. Westchester and Suffolk counties are among those that have them.

New York City does not.

“The bottom line is that no one’s ever really done the job of putting together the registry,” said formerAssemblymember Richard Brodsky, who has scrutinized New York City’s disaster preparedness as chair of the state Committee on Corporations, Authorities and Commissions,. “It’s gotten lost in the shuffle.”

Mayor Bloomberg’s office did not respond to repeated telephone and email inquiries about the proposed special needs registry.

Special needs registries are voluntary lists of individuals who provide their names, addresses and phone numbers, as well as emergency contacts, to local authorities because they have specific needs and vulnerabilities during disasters. People who sign up may get additional assistance such as personal alerts and check-up calls, disabled-accessible transportation for evacuations, and placement in shelter facilities with specialized medical equipment and care.

New Jersey has a registry of about 14,000 people that covers the entire state, according to Mary Goepfert, external affairs officer for the NJ Office of Emergency Management.

In 2005, following the humanitarian disaster unleashed by Katrina, then-Assemblyman Brodsky conducted hearings to assess New York City’s preparedness for a major hurricane. He found that a crucial gap in the city’s plans was the lack of a clear program for evacuating frail senior citizens, people with disabilities, and other vulnerable populations.

In testimony under subpoena before Brodsky’s committee, city emergency management chief Joseph Bruno described the registry as an initiative that Bloomberg “is going to consider” in his second term. Bruno said that his agency was ready to act immediately to develop a registry if Bloomberg directed him to do so.

“OEM will be deeply involved in the development and maintenance of such a registry, as would many other agencies,” Bruno testified.

Bruno also indicated that some public and private agencies maintained lists of their clients that the city’s disaster-response plan called for them to share with the city Office of Emergency Management. Whether or how these were used in response to Sandy remains unclear.

The city health department confirmed that it does not have a citywide disabled or special needs registry. The Human Resources Administration and the New York City Housing Authority said they do have special needs data about their clients, but would not say whether this information was used in the response to Sandy. The Office of Emergency Management did not respond to inquiries about the registry and its programs for individuals with special needs.

New York City also has an advance warning system that provides emergency preparedness information to agencies with special-needs clients, which the agencies can then pass on to these individuals.

Under the New York state law encouraging registries, disabled individuals must sign up voluntarily. The databases should be updated annually by authorities and are to be shared with local, state and federal emergency responders in the event of a disaster.

In Suffolk County, 658 people are currently on a registry maintained by county’s Office of Emergency Management, according to Joel Vetter, the emergency management services coordinator for the county. In the days before and after Sandy hit, volunteers placed some 4,000 calls – averaging more than six per registrant – to the people on the list and their emergency contacts. Responders evacuated 130 people on the list from flood-prone areas and places where the electricity that registrants depended on for medical equipment was in danger of being knocked out. More than two dozens were sheltered in hospital beds that included equipment such as ventilators.

Vetter said that using the registry saved lives in the response to Sandy.

“We have documented cases of people who were mobility restricted who we evacuated and their houses literally burned to the ground,” he said.

Vetter emphasized that the registries’ success depended on the involvement of numerous agencies.

Even as registries gain traction in New York and New Jersey, they remain controversial among advocates for the disabled. Some supported the idea of registry because they wanted to make sure they didn’t fall through the cracks during a disaster, while others viewed it as little more than window dressing that failed to address the gaping holes in the city’s emergency response for the disabled.

“We knew there was consideration and discussion of a registry, but we’ve been really relieved that it hasn’t occurred,” said Susan Dooha, executive director of the nonprofit Center for Independence of the Disabled, New York. “We think the benefits of a registry would be less meaningful than the benefits of really tackling appropriate planning to make emergency response incorporate the needs of people with disabilities.”

Dooha said she was concerned that a registry would miss substantial populations such as undocumented immigrants and victims of domestic violence, would be expensive to maintain, and posed concerns about confidentiality. She said the city needed to begin with more basic reforms to make emergency shelters, transportation and city services accessible.

Redlener acknowledged that maintaining an effective registry would be a “monumental task,” and that preserving confidentiality of data is a significant concern. But he said that a voluntary registry could be implemented right away if the city chose to move forward.

“These concerns may be legitimate or not, but that is not an excuse to do nothing,” said Brodsky. “And doing nothing has been the rule of thumb.”