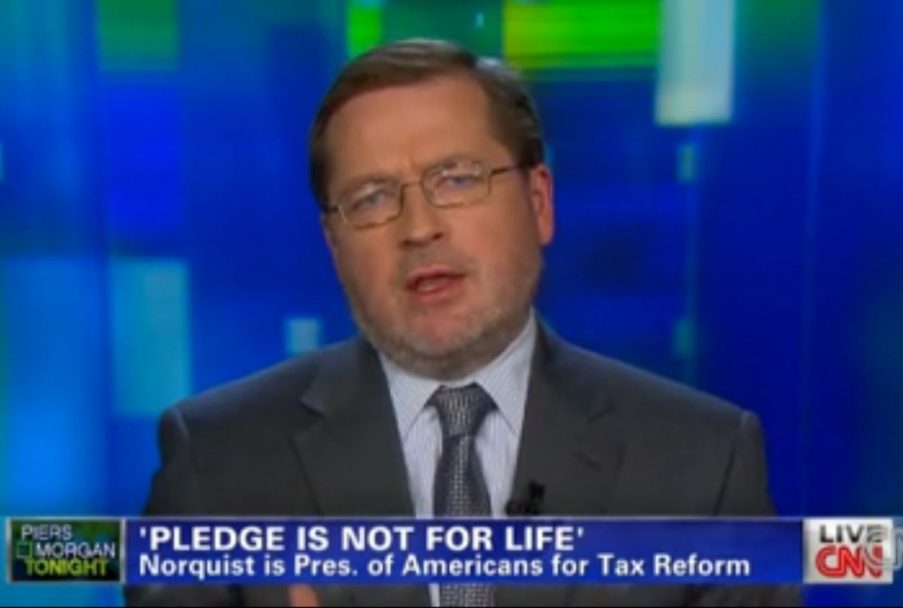 As Grover Norquist made the rounds on television during the “fiscal cliff” negotiations, he reprised his now-familiar role as the titular spokesman for and enforcer of the GOP’s anti-tax orthodoxy. Despite a few high-profile defections from Norquist’s party line, most Republican lawmakers remained unwilling to raise revenues to deal with the debt crisis they had engineered over a year ago.

How can Norquist, a bespectacled 56-year-old conservative activist, hold such sway over an entire party? Though he has carefully cultivated a certain mystique — on his website, Norquist highlights a quote calling him the “dark wizard of the Right’s anti-tax cult” — in reality, his wizardry is little more than a skillful manipulation of high-dollar politics. Although he’s best known for his “Taxpayer Protection Pledge,” a document created in 1986 and now signed by over 95 percent of the Republican legislators in Congress, Norquist’s influence actually derives from his alliances with powerful donors.

Norquist has never been elected to office, and his foundation, Americans for Tax Reform, doesn’t boast a large membership base like other Washington advocacy groups, such as AARP and the National Rifle Association. Instead, Norquist commands respect because behind him loom some of the most politically active Republican billionaires and biggest industry associations on Capitol Hill.

The Nation reviewed the foundation’s most recently available tax disclosures, which show that in 2010 Americans for Tax Reform received more than 66 percent of its budget from only two sources. That year, the Koch-affiliated Center to Protect Patient Rights donated $4,189,000 to the foundation, and Karl Rove’s Crossroads GPS gave $4 million.

Taken together, these two groups constitute the nexus that has fueled the post–Citizens United dark money explosion in American politics. The Center to Protect Patient Rights is the foundation used by the billionaire clique led by the Koch brothers to distribute grants to allied groups. Two years ago, wealthy moguls like Steve Bechtel of the Bechtel Corporation and Steve Schwarzman of the Blackstone Group met behind closed doors to help raise money for these very efforts. Crossroads GPS, of course, is the group Rove uses to pummel Democrats with negative advertising. The only known individual donor to Crossroads is Paul Singer, the “vulture” hedge fund king famous for his generous contributions to conservative politicians and his efforts to extract large interest payments from third world debt.

Norquist’s pledge, which stipulates that its signatories must oppose efforts to raise tax rates or cut tax credits unless accompanied by dollar-for-dollar reductions in rates, is lucrative for these billionaires. After all, wealthy investment managers enjoy extraordinarily low tax rates because of loopholes like the carried interest rule, which allows their earnings to be taxed at capital gains rates rather than as income. Any effort to raise upper-income marginal rates or close this loophole — which allows some fund managers to pay at lower rates than their doormen — would violate Norquist’s pledge. And to make matters worse for any Republican thinking of such heresy, the big-money network underwriting Americans for Tax Reform also funds the Club for Growth, the Super PAC that has promised to spend big bucks on primary challenges for those who don’t hold the line on taxes.

The second provision of the pledge — the promise not to cut tax credits — is important for understanding how Norquist has become a proxy for K Street. From a budget standpoint, a targeted tax credit is basically equivalent to a subsidy: the main difference between a $1 million tax credit to an ethanol refinery and a $1 million subsidy to the same ethanol refinery, for example, is that one is distributed by the IRS, the other by another federal agency. But Norquist slams any effort to cut tax credits as an onerous tax increase. There are enough of these subsidies in the tax code that many profitable companies, like Duke Energy, can pay an effective negative tax rate.

A look at Norquist’s other donors provides an important window into his relationship with the business lobby. Take General Electric, which faced withering bipartisan criticism when The New York Times reported that the company, thanks to a multitude of tax credits and other tax subsidies, paid no federal income taxes in 2010. Norquist was there to defend the company in a chat with The Washington Post, arguing absurdly that removing billions in tax rebates to GE would just be a tax on consumers — cutting GE’s tax credits, after all, would break the Norquist pledge. In a recently posted 2011 giving report, GE says it made a contribution of $50,000 to Norquist’s foundation that year. Consider that for a moment: GE gave more to Norquist in 2011 than it reportedly paid the IRS for income taxes in 2010, a year the corporation made $14.2 billion in profits.

Though Norquist claims to protect all tax credits, he seems to devote a great deal of his attention to some groups rather than others. A search on Norquist’s foundation website shows countless action alerts to protest attempts by law-makers to shutter wasteful energy subsidies, including billions in tax credits to oil and gas companies. One post claims that removing nearly $100 billion in tax subsidies for oil companies amounts to a “tax hike on energy producers and families.”

Disclosures reviewed by The Nation show that, from 2008 to 2011, the American Petroleum Institute, a trade association for oil and gas companies like Chevron and ExxonMobil, gave $525,000 to Americans for Tax Reform.

It is difficult, from a public relations standpoint, for oil companies to defend their tax credits on the merits. Oil companies with billions in quarterly profits can deduct costs for drilling wells and receive “manufacturing” tax deductions for simply refining crude oil. Norquist’s pledge (and his foundation’s advocacy) transforms billions in taxpayer handouts into “tax cuts” that cannot be removed. In other words, Norquist is providing ideological cover for his benefactors in the oil industry and the rest of corporate America.

He developed his peculiar style of corporate advocacy in the 1980s. As Thomas Frank detailed in his book The Wrecking Crew, Norquist figured out early that he could leverage big business donors. Through a nonprofit called the United States of America Foundation, Norquist and his colleagues in the College Republicans would collect money from corporate interests in exchange for a promise to oppose efforts by campus-based Public Interest Research Groups (the consumer action groups better known as PIRGs). As these groups fought to enact regulations on polluters, for example, Norquist would solicit those same polluters to donate to his nonprofit, which would then do battle with the PIRG do-gooders.

He went on to work as a registered lobbyist. One of his first official gigs was a contract to represent France-Albert René, the leftist leader of the Seychelles, a small island nation off the east coast of Africa. In one of the first exposés of Norquist’s coin-operated conservatism, Tucker Carlson, in a piece for The New Republic, called out the foreign influence peddling, referring to Norquist as just another “cash-addled, morally malleable lobbyist.”

Norquist later started his own lobbying firm, Janus-Merritt Strategies, and signed up an elite roster of clients — including, most famously, Fannie Mae. In the late 1990s, Microsoft invited representatives of Americans for Tax Reform to travel to Washington State for a three-day presentation (which included tickets to a Mariners game as well as dinner and entertainment at Seattle’s Teatro ZinZani). Two days after they returned, the foundation sent a letter to House Republicans urging them to cut deeper into the budget of the Justice Department’s anti-trust division — the same unit then pursuing Microsoft in a high-stakes legal case. Microsoft, The Washington Post noted, had paid Norquist $40,000 as a registered lobbyist for the company.

Early in the Obama administration’s first term, Norquist sent a letter to FedEx, demanding that the company back away from an anti-UPS website it hosted to fight off a measure that would enable FedEx employees to join a union. (UPS workers are unionized.) It was a surprisingly pro-union move for a conservative like Norquist, who has praised draconian efforts to curb organizing rights in states like Wisconsin. Yet it is less surprising given that UPS, through its charitable foundation, gave Americans for Tax Reform $25,000 a few months after he sent the letter.

The most sordid examples, however, come from the Senate investigation into Jack Abramoff’s lobbying. As the Associated Press reported, one of Abramoff’s clients, the Mississippi Choctaw tribe, worked out an arrangement in which Norquist would transfer $1.2 million in Choctaw money through Americans for Tax Reform to other Abramoff efforts. In exchange for laundering the money, Norquist kept a cut of $50,000 from two of the transfers. Somehow, Norquist emerged from the Abramoff scandal largely unscathed and more influential than ever.

In spite of all this, the press has been quick to designate Norquist a “movement” leader or an ideological purist — terms that merely enhance his prestige. Another term might be more accurate: corporate lobbyist.