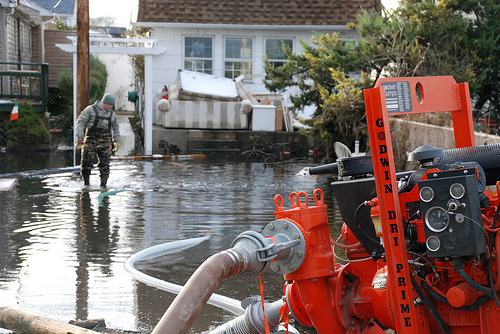 US Service members supporting the Army Corps of Engineers and the Federal Emergency Management Agency's mission to allow access to flooded homes, pump up to a million gallons of water per day in Breezy Point, Qu... | Credit: US ARMY PHOTO BY MARY MARKOS

A woman unable to recharge an electronically powered respirator she relied on for breathing. A wheelchair-bound man trapped without enough medication to stabilize the swelling in his limbs. Homebound diabetes patients who ran out of glucose meter strips and could no longer measure their blood sugar. In the weeks following superstorm Sandy, these stories and many like them trickled out down dark stairways from residents stranded in the city's low-lying, high-rise public housing complexes without heat or electricity.

If the needs of residents were shocking to many New Yorkers, they also weren't news to the New York City Housing Authority (NYCHA).

By the time Sandy struck, NYCHA had already compiled alarming evidence showing that its complexes are home to dense concentrations of elderly, disabled and homebound residents.

What's more, the authority says it knew exactly who the vulnerable residents are and where they lived even before Sandy struck. Even as the city failed to follow through on a proposal for a voluntary registry of people requiring assistance in an emergency, NYCHA had developed its own internal database of individuals with special needs such as limited mobility, infirmity or reliance on electronic medical equipment.

Yet neither NYCHA nor other city agencies had put measures in place to reach those residents if they do not evacuate during emergencies. What the city didn't have — and still doesn't — is a plan to ensure that public housing residents get adequate emergency and medical aid when the next storm comes.

“In the end of the day, no one was really paying attention to these high-risk individuals in NYCHA housing,” said Dr. Irwin Redlener, the director of the National Center for Disaster Preparedness and co-chair of the New York State Ready Commission, a panel of experts appointed by Gov. Andrew Cuomo to recommend policy reforms in the aftermath of Sandy. “It's something that seems to have basically fallen through the cracks because no one seems to have taken responsibility for it.”

Mulitple city agencies were aware of the needs. A 2011 report commissioned by NYCHA along with the city Department of Health and Mental Hygiene and Department for the Aging found based on a survey sample that among more than 61,000 senior citizens living in NYCHA developments, roughly half lived alone and fully 79 percent had two or more chronic health conditions. Nearly a third had limitations in their abilities to perform basic daily activities, a rate about five times the national average among older adults.

“Some of these buildings are turning into naturally occurring retirement communities before our eyes,” said Nancy Wackstein, the executive director of United Neighborhood Houses, a nonprofit network of settlement houses that works intensively inside NYCHA developments.

The authority says it contacted residents on its special-needs list before the storm and provided buses for evacuation, but a combination of inadequate evacuation services to meet the transport and shelter needs of the disabled, residents' unwillingness to leave their homes, and the lack of follow-up services after the storm meant that many if not most people on this list stayed in their homes during the storm, and ended up in danger and discomfort. Overall, only 6,100 New Yorkers took refuge in city shelters during Sandy, while 80,000 NYCHA residents live in buildings that were directly affected by the storm.

The author of the 2011 report on NYCHA seniors, Lorna Thorpe of the CUNY School of Public Health, said the health needs in public housing were so serious that they required a major influx of city resources even in the absence of a disaster.

“We should be taking all our flagship programs,” Thorpe said of the city's health and social service agencies. “It can't be NYCHA alone.”

She said her study represented an initial step by NYCHA and other city agencies to develop a picture of health needs in public housing, with a goal of ultimately developing better programs to address them.

NYCHA said in a statement that it is “responsible for 400,000 residents in public housing,” — without specifying how it defined that responsibility — but noted that it does not provide human services itself.

“NYCHA does not directly provide services to its residents, but rather links residents to services, as needed,” the authority said. “NYCHA does not have medical professionals on staff to deliver health services.”

The office of Mayor Michael Bloomberg did not respond by deadline to requests for details about city plans for emergency aid to public housing residents.

One of the key disputes that has emerged after Sandy is whether NYCHA itself is responsible for the safety of its most vulnerable residents during disasters – and who will step up to the plate to provide the services it can't.

This unresolved dilemma was on display during a tense City Council appearance on Jan. 17 by Cecil House, NYCHA's general manager. Members repeatedly took House to task for NYCHA's shortcomings in protecting vulnerable residents, who in many cases were stranded for long stretches in cold, dark apartments without relief from the city. It was not until Nov. 9, close to two weeks after the storm's landfall, that city relief teams began going door to door in NYCHA developments.

Melissa Mark-Viverito of northern Manhattan criticized NYCHA for not surveying the emergency needs of its residents as a part of its damage assessments in the days after the storm.

“I just want the Housing Authority to understand that they have an obligation to take care of these people,” declared Councilman Stephen Levin of Brooklyn, whose district included the Gowanus Houses, which went without power for 11 days after the storm. “And they did not meet that obligation.”

Yet House's testimony made clear that he understood NYCHA's obligations very differently, because it is a housing agency – essentially a landlord – barely able to meet its responsibilities on that front. NYCHA is already struggling with deep deficits, more than 300,000 backlogged repairs, and eroding funding support from the federal government.

In the days after the storm, House said, NYCHA's obligation as a landlord prompted it to begin by assessing physical damage to its buildings. He said NYCHA sent teams to each of its affected developments, but they may not have been visible because they were tackling the power and heat outages that made conditions so hazardous: rather than going door to door, they were likely working on repairs in the basement.

In response to criticism that his agency had not conducted an emergency needs assessment after the storm, he noted pointedly that “public housing residents are part of the city” and subject to the same citywide emergency response as any other resident.

One of the neighborhoods that suffered most from Sandy's impact was Red Hook, home to the city's second-largest public housing complex. In the Red Hook Houses, more than 6,000 residents in 36 buildings lost heat, power or both in the weeks following the storm.

In the days after Sandy's landfall, Red Hook residents said that, as in so many other affected areas, the only aid came from local nonprofits. When volunteers went door to door, they found homebound residents trapped in their apartments not only without enough food but without crucial medical equipment and care.

“The response was not there,” said Alisa Pizarro, a tenant of the Red Hook Houses and an organizer with the Red Hook Initiative, a community group that provided food and medical aid to residents stuck in their apartments. “That first week it was just regular folks got together and made this happen. It was not NYCHA or anyone from government.”

Red Hook Initiative organizers had a list of 77 tenants in the development whom they provided with medical services in their apartments in the aftermath of the storm. Many were homebound due to chronic conditions such as respiratory illness, diabetes and physical impairments, and organizers found that many in this group had been doing without needed services from city or private agencies even before the storm occurred.

Sandy was not the first time that the city's blind spot regarding vulnerable Red Hook Houses tenants placed these residents at risk after a disaster. Ryan Schiavone, a paramedic who responded to 911 calls in the Red Hook Houses following Sandy, recalled facing similar emergencies in previous storms. He said he responded to repeated calls following Tropical Storm Irene and the blizzard of 2010 from project residents who were unable to access needed medical care or supplies.

“There were people that were on ventilatory equipment that needed very specific types of care that were being overlooked,” Schiavone said. “This happened during the blizzard, it certainly happened during hurricane Irene…. The same thing keeps happening over and over again and nobody's getting through.”

Yet in Sandy's aftermath, city agencies and elected officials rarely knew what was happening in NYCHA buildings, even as the humanitarian disaster became apparent. Members of the City Council criticized NYCHA at last week's hearing for not sharing an internal disaster preparedness plan with the Council, and not providing its special needs list to elected officials or local community groups in the storm's aftermath.

Brad Lander, a councilman from Brooklyn who assisted relief efforts in the Red Hook Houses, said that nothing he has heard so far in the council's hearings gave him confidence that the city had a plan for who would take charge of addressing disasters affecting public housing projects in the future.

“One of my frustrations here in general is a lingering sense that there's some meaningful distinction between NYCHA and the City of New York,” Lander said.

“Especially in a moment of crisis, it's got to be a unified effort.”

This article was produced in partnership wtih The Investigative Fund at The Nation Institute.