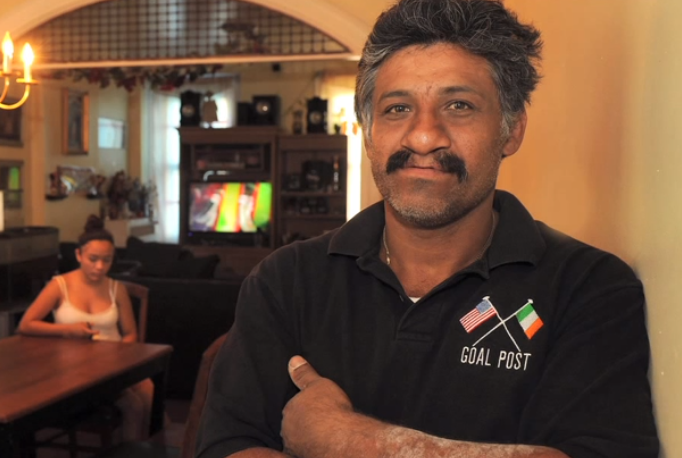 This is the second in a two-part series. Read part one here.

Listen to the story here:

Ernesto Cruz-Garcia waits patiently in a Center City logjam in his battered blue pick-up. His face shows relief. He has just won a reprieve in an immigration court hearing in Philadelphia, assurance of a few more months in the United States.

He is on his way to deliver the news to the office that supervises his whereabouts while he fights deportation to Mexico.

“You’ll see a lot of Mexicans there,” Cruz-Garcia predicts. He has reported to this suite, with posters of American landmarks on the walls, regularly since his arrest by police in Norristown, Montgomery County, last spring.

According to Cruz-Garcia’s family, officers arrived in front of their home in six police vehicles on the evening of March 30, 2012. They pointed their weapons at Cruz-Garcia and his three young children, who were outside feeding their dog.

“My daughter was trying to ask them what was happening in English,” Cruz-Garcia recalled, “and they were telling me to shut up.” His 5-year-old was so scared he passed out.

What police wouldn’t tell Cruz-Garcia was why they were there. They produced no warrant, even after his 13-year-old demanded one.

From this point, Cruz-Garcia was thrust into an ongoing ordeal lasting more than a year and a half in a little-known corner of our legal system. More and more immigrants are having similar experiences, as immigration enforcement works more closely with local law enforcement throughout the country.

The capstone of these efforts is the controversial Secure Communities program, which sends information on people arrested locally to U.S. Immigration and Customs Enforcement. It’s supposed to help ICE find people the agency is already seeking, to make sure they’re not released, but, as in Norristown, collaboration can take many forms.

WHYY/NewsWorks obtained police reports that say an ICE agent had passed on a tip that a gang member was supposedly selling drugs from Cruz-Garcia’s address. Police confirm they found no drugs. They put him on the phone with an immigration agent. After they hung up, they say they took Cruz-Garcia into custody because immigration asked them to.

“They hadn’t told me anything,” said Cruz-Garcia. “I didn’t know why they arrested me or anything.”

Norristown’s local police cannot arrest anyone for violating federal immigration law. This legal regime has been maintained, in part, to preserve immigrants’ willingness to report crimes and work with police.

Immigration says the account in Norristown’s arrest report is not their procedure. Earlier this year, WHYY/NewsWorks presented the scenario by phone to a former ICE spokesman, Ross Feinstein, and the head of ICE’s Philadelphia office of Enforcement and Removal Operations, Thomas Decker. Here’s how the exchange went:

Feinstein: That doesn’t seem accurate to me. Tom?

Decker: No, that’s something that [ICE] wouldn’t do, no.

Eleven months after we first asked ICE why Cruz-Garcia was arrested, the agency provided a new explanation last week that contradicts the police report. The agency now claims Norristown police told ICE they planned to arrest Spanish-speaker Cruz-Garcia for lying to officers who, by all accounts, only spoke English.

Norristown’s police report says nothing about Cruz-Garcia lying to them. Norristown’s recently retired police chief said he saw nothing wrong with the arrest. The borough would not comment to ICE’s latest comments.

Lawyers, who WHYY/NewsWorks asked to review both agencies’ documents from the time, said they appeared to show an immigration arrest by police who aren’t authorized to make one.

If Cruz-Garcia had been charged with a crime, and had his day in a criminal courtroom, police officers would have to explain their actions and he would have had the right to a public defender.

“You move on to another system where now you no longer have right to attorney or to remain silent and your silence can actually be used against you,” she stated.

Defendants may face exile from their families and livelihoods but have few guaranteed protections, she says. There are no court-appointed lawyers. The cost is prohibitive for many families. Recently released numbers show about half of defendants represent themselves. The civil courts accept evidence that criminal courts wouldn’t.

Attorneys are not the only ones who believe the system is fatally flawed. So does the president of the National Association of Immigration Judges, Dana Marks.

“We feel that we are doing death penalty cases in a traffic court setting. The stakes involved for people, particularly in asylum cases, are extremely high, and yet the volume and the resources we have available to us in handling those cases is far more like traffic courts than any other court in the country,” she said.

The US Supreme Court said in the 1980s that really “egregious” violations by law enforcement could get a case thrown out of immigration court. Recently, more lawyers have argued their cases meet that high bar.

In Philadelphia, they have seen mixed results. Attorney Barry and others say ICE usually administratively closes the deportation cases they have challenged. This provides a certain amount of safety for defendants (ICE could reopen the case later). However, as Barry pointed out, “There’s no hearing. There’s no testimony. The police never have to come in and testify about what happened and there are absolutely no consequences for the officers who treated the person this way in the first place.”

A former assistant commissioner for ICE’s predecessor, the US Immigration and Naturalization Service, Jan Ting responded that immigration courtrooms were not created to get those answers. Their sole purpose is to figure out who should get deported.

The immigration courts already have crippling backlogs, including almost 5,000 pending cases in Philadelphia. Each can drag on for two to five years.

“The main reason for leaving the system the way it is just the cost,” suggested Ting, a NewsWorks blogger. “To say we’re going to give all these procedural due process rights that would accrue to any criminal defendant would protract the litigation.”

Immigration attorney David Bennion worries that if police see no consequences for arresting people they don’t intend to charge, or for other misconduct, they will feel freer to approach everyone more aggressively.

“That’s going to give a green light to local law enforcement and to ICE,” Bennion argued, in their efforts to make communities safer, “use any pretext to target someone that they believe is undocumented and then try to get that person deported because they’re under the impression that’s going to make their communities safer.”

The defendant in immigration court, Ernesto Cruz-Garcia, believes police behavior like he experienced has made Norristown less safe.

In Spanish, he explained, “[If] somebody’s trespassing or commits a robbery on the street, or just somebody is fighting or something like that, you’re supposed to call the police, but here we don’t. Nobody’s going to call them because they feel afraid of immigration issues. That is not right.”

As strongly as Cruz-Garcia feels about advocating for immigrants’ rights, in immigration court, the attorney he saved for argued his family’s area of Mexico has become too violent to return to. The circumstances of his arrest will never enter the courtroom. Cruz-Garcia’s top priority is to stay with and support his family. He’ll take the best argument to make that happen.

He’ll be back in court next month.

This story was reported in partnership with The Investigative Fund at The Nation Institute, now known as Type Investigations with additional support from the Fund for Investigative Journalism.

Emma Jacobs is an independent, multimedia journalist based in Philadelphia.