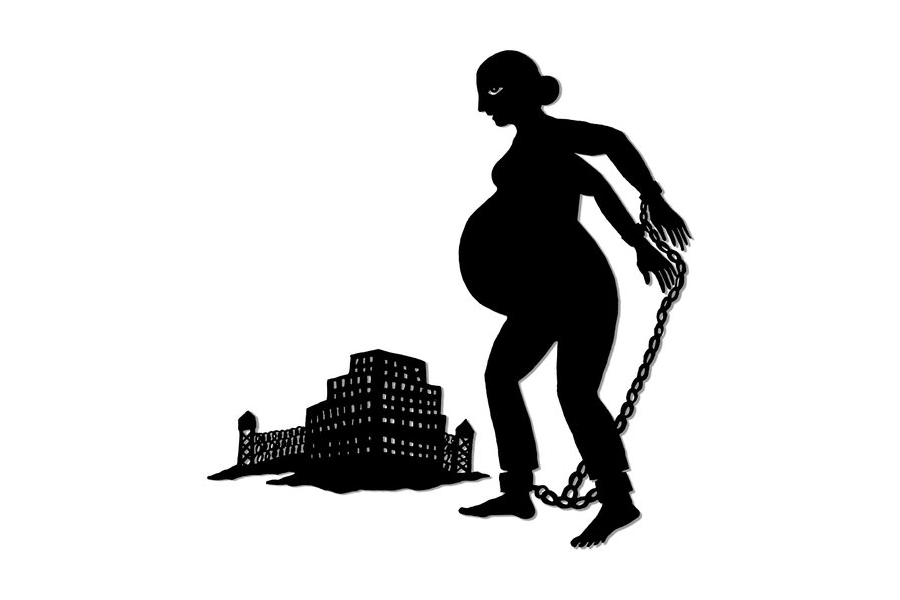 Early one morning in November 2011, Tina Tinen, a pregnant prisoner at the Bedford Hills Correctional Facility in Westchester County, N.Y., woke with painful contractions. Guards called an ambulance to take her to the hospital and, according to her account, shackled her wrist to the bar of a gurney — despite a 2009 state law against shackling pregnant inmates during and after labor.

Ms. Tinen, who was serving time for a nonviolent drug offense, had been placed in restraints frequently throughout her pregnancy. A few weeks earlier, wearing handcuffs and ankle irons, she had slipped and fallen on icy pavement. Although she was now suffering considerable labor pain, guards refused to unshackle her until she reached the hospital bed, 15 minutes before she gave birth.

Not long after that, in July 2012, another Bedford Hills prisoner, Jacqueline McDougall, was shackled on the return trip to the prison after giving birth in Westchester Medical Center. Although Ms. McDougall had undergone an emergency cesarean section and had needed a blood transfusion, her handcuffs were linked to a chain around her waist and clamped together over her sutured incision, she recalled. “With the weight on the stomach,” she said, “it felt like they were ripping open my C-section.”

Ms. Tinen and Ms. McDougall are not isolated cases. A report to be released in September by the Correctional Association of New York, a nonprofit group that monitors prison conditions, indicates that such shackling is common. Of 27 women whom the association surveyed who had given birth in New York prisons since the passage of the 2009 law, 23 reported having been shackled just before, during or after their delivery.

“The law was put in place because New York State recognized that these practices are an affront to human rights and decency,” said Tamar Kraft-Stolar, director of the association’s Women in Prison Project. “The fact that it’s being routinely violated is egregious.”

A spokesman for the Department of Corrections and Community Supervision in New York declined to comment on the report.

This is a multistate problem. Over the last 15 years, 21 states have enacted laws against shackling pregnant inmates during and after labor, but many of the laws have proved ineffectual. In interviews with former inmates, prison officials and medical providers — and in records acquired through freedom of information requests — I have found evidence of negligence in the implementation of these laws across the country.

Although it is estimated that only about 2,000 prisoners in American correctional facilities give birth each year, the issue raises a broader concern about excessively punitive aspects of prison culture. Democratic and Republican politicians alike have pushed for anti-shackling legislation. Doctors have called shackling a threat to the health of both mother and child. Criminologists have deemed it unnecessary, as it appears that no unshackled pregnant inmate has ever escaped during labor.

But in many correctional systems, doctors, guards and prison officials simply are not told about anti-shackling laws, or are not trained to comply. In Illinois, improperly trained guards continued to shackle women for years after such a law was passed in 1999. After some 80 prisoners in Cook County brought a class-action lawsuit, the state in 2012 passed legislation strengthening protections in the county. (The suit was settled for $4.1 million.) But downstate, an unpublished survey of county jails by Chicago Legal Advocacy for Incarcerated Mothers cites 20 institutions that don’t have written policies that fully comply with the statewide law. Corrections officials would not comment on these allegations but said that they expect each county facility to meet all existing standards.

Even California, an early adopter of anti-shackling legislation, has struggled to effectively implement its original 2005 law and an updated 2012 law. A report this year from Legal Services for Prisoners with Children, in San Francisco, found that a majority of California county correctional facilities had yet to implement proper written policies. Confronted with these findings, the Board of State and Community Corrections noted that there have been no incidents of shackling under the new law, that they are inspecting for compliance and that a review meeting to create standards for the jails is scheduled for later this year.

Inadequate implementation isn’t the only problem. The language of some of the laws gives wide latitude to corrections officers to use restraints if they identify security risks. In theory, this should improve safety, but in practice, it creates opportunities for the continuation of shackling.

In Pennsylvania, files provided by the state corrections department document just over 100 incidents in which women were shackled from July 2012 to June 2013, with security or risk of flight usually cited as the reason. But according to a recent report from the A.C.L.U. of Pennsylvania, hospital staff members report routinely seeing pregnant prisoners handcuffed in the hospital and during delivery.

Nationwide, perhaps the most prominent case is that of Valerie Nabors, who sued the state of Nevada after giving birth in its prison system three years ago. The state had previously outlawed restraints during labor and delivery. Ms. Nabors was serving a sentence at the Florence McClure Women’s Correctional Center in Las Vegas for stealing more than $250 in casino chips, and was not deemed a high flight risk.

According to the complaint, when Ms. Nabors went into labor, a prison nurse called an ambulance and Ms. Nabors was handcuffed and taken to the vehicle. Then officers shackled her ankles together. An ambulance supervisor protested, explaining that if Ms. Nabors’s water broke or complications developed, the supervisor would not have proper access to help her. Officers refused to remove the restraints.

At the hospital, a nurse also questioned the use of the shackles. The officers again refused to remove them. At the insistence of a delivery room nurse, they relented. Ms. Nabors gave birth to a daughter through an emergency cesarean section, but within 10 minutes she was placed back in ankle shackles and chained to the bed.

Doctors later found that Ms. Nabors had suffered several pulled muscles in her groin. X-rays revealed a separation of her pubic bones. Her physician concluded that the injuries were a direct result of the restraints. “We were shocked,” Staci Pratt of the A.C.L.U. of Nevada said of Ms. Nabors’s experience. “And it takes a lot to shock an A.C.L.U. attorney.”

Victims of illegal shackling rarely litigate, often because of feelings of shame or fear of repercussions. But Ms. Pratt helped Ms. Nabors bring a case against the Nevada Department of Corrections in 2012. This January, the state paid a settlement of $130,000.

Two months later, the Nevada Board of State Prison Commissioners adopted new regulations for oversight, including training requirements for corrections officers and investigatory obligations for the state.

Danyell Williams, a former doula for prisoners in Philadelphia, says that such lawsuits are crucial to ensuring proper compliance with anti-shackling laws. “These laws were passed,” she said, “and everybody patted themselves on the back for doing what was right and human and then went on about their business. But there’s no policing entity that’s really going to hold these institutions responsible.”

This article was reported in partnership with the Investigative Fund at the Nation Institute.