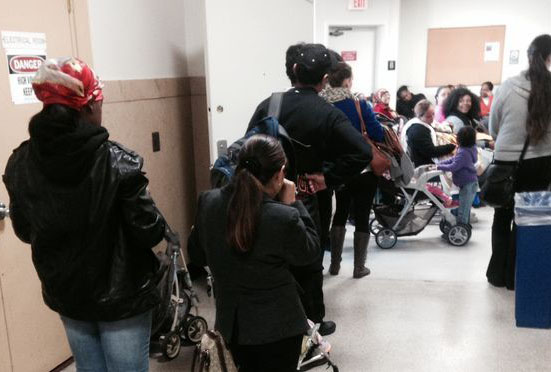 JOSEPH CAPRIGLIONE/WNYC
Applicants wait in line to sign up for Medicaid and food stamps outside an overflowing applicaton center at the Essex County Division of Welfare.

If you're poor and qualify for free health insurance under Obamacare, then 18 Rector Street represents a particularly hellish place.

People leave the Division of Welfare in frustration, dozens told WNYC, after being sent to multiple offices in the building, waiting hours in line and failing to get their Medicaid application processed. This presents a huge obstacle to the success of the Affordable Care Act, because without health insurance, poor people will continue to not be able to afford to see a doctor, and that sends them to emergency rooms will drive costs up for the entire health care system.

New Jersey is among just a handful of Republican-led states that embraced the Affordable Care Act's expansion of Medicaid in the past year. That decision led to a dramatic growth in the state’s public health insurance program — more than 280,000 people had signed up as of this summer, clumped in densely poor, urban areas like Newark.

In September, Sowell had been waiting six months for the Division of Welfare to approve his Medicaid application. Under state law, the process should take 30 days.”They won't return your messages. Half the people, if you call, they messages is full, so you can't leave a message,“ Sowell said. ”It's ridiculous! I can't say it no other way.“

A backlog in Medicaid applications has plagued county welfare divisions all year. At its worst, more than 70,000 people statewide had been waiting more than the state-mandated 30 days for their applications to be approved.

A New Jersey state health department spokesperson explains that the huge influx of applicants was more than the counties could handle. But critics say there’s a more fundamental problem with public assistance programs in New Jersey — one that Medicaid’s expansion has simply helped to highlight.

“I would say that the overall system is broken in our state,” says Ray Castro of New Jersey Policy Perspective. “This has been a problem we’ve had for years.”

The federal government is picking up the entire bill for Medicaid’s growth until 2020, and for 90 percent of it thereafter. But while the feds are paying for the coverage itself, there’s still the question of resources to manage the program. And over the past decade, as the need for assistance of all sorts has dramatically increased, the resources available for meeting that need have lagged. This year’s surge in Medicaid applications has proven to be more than an already tattered economic safety net could hold.

This spring, the Communication Workers of America Local 1081, which represents Essex County’s welfare workers, commissioned an independent study of caseloads and staffing. It found a nearly 80 percent increase in caseloads statewide since the recession began. Staffing, however, remained relatively flat. By 2012, all but three of the state's 21 counties failed to meet minimum staffing levels dictated by state guidelines.

Castro says a core problem is that neither the state nor the individual counties are clearly accountable.

“The state sets a policy and the county has to administer it, but the problem is the county also has to provide the staffing,” Castro explains. “So there’s always a tension between the county and the state.”

Which devolves into a tension between people needing help and the county workers trying to provide it.

That tension is likely to worsen this fall. Open enrollment for the Affordable Care Act’s marketplace resumes on Nov. 15. If the first enrollment period is a lesson, it will also generate tens of thousands of new Medicaid applicants in places like Newark — and it will push things at 18 Rector Street from bad, to much worse.

More from our series Rolling Out the
Affordable Care Act