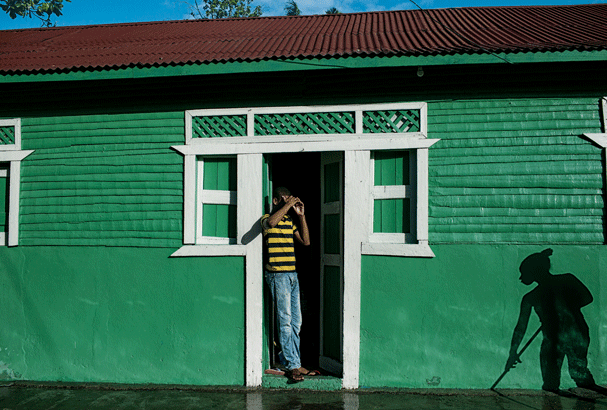 Felicita Carrasco was born in a slatted wooden house in a village so small it doesn’t appear on maps of the Dominican Republic. Saladillo, with its single paved road, is essentially a subdivision of Las Salinas, a larger town of six thousand. The two isolated communities sit on the cusp of a mountain ridge covered with Creolean pines that stretches almost to the border with Haiti.

The family’s third child, Felicita had light skin, electric hazel eyes, and a head of dark curls flecked with blond. Most of this she inherited from her mother, Claribel, who loved Felicita’s thick hair and spent hours brushing it, styling it, affixing bows. Growing up, the little girl — who was nicknamed Anaibe — often played in the yard with her older sister, Angelina. Their favorite game was choosing names for their future children: especially their sons. Together they cleaned the house, washed dishes, and went to neighborhood birthday parties.

In time, though, Anaibe’s behavior began to change. She preferred pants to skirts, and took to pulling Claribel’s ornate pink-and-white bows out of her hair. She sneaked out to play with the neighborhood boys, who spent their time caked in mud, racing rickety cars they had made out of wooden planks, climbing trees, and throwing rocks at birds.

Claribel was always looking for Anaibe around the village, yanking her away from the gaggle of boys, and dragging her home. “Play with the girls!” she told her daughter. Anaibe would stomp her feet and sulk in the back yard with the family’s wandering chickens and its pack of tiny, pointy-eared dogs. When enough time had passed, however, she would escape again.

For her part, Anaibe didn’t know how to explain this confusion, not that anyone ever asked. Things just didn’t feel right. Her older sister’s frame began to take on feminine contours — rounded hips, the suggestion of breasts — but Anaibe’s never did. One night, when Anaibe was twelve, she woke Angelina in the bed they shared. She had been touching her vagina when she noticed something. “I feel like I have two balls inside there,” she whispered. “I don’t know if it’s an infection or what.”

Angelina did a quick inspection. “I don’t know what it is, either,” she said. “Mine isn’t the same.”

Over the next year, Anaibe grew stronger and taller than her sisters. Her chest expanded, her shoulders broadened. There was a ripple in her throat, and when she flexed her muscles, her friends were impressed. In the schoolyard, some of the kids started to tease her, and when she couldn’t bear it any longer, she hit them — often joined by her five brothers and sisters, an entire squad of Carrascos dispensing vigilante justice. But the kids kept at it. They called her guabidó, güevote, machihembra. And while the words stung, they also resonated.

Everyone in Las Salinas and Saladillo has heard of guabidós, güevotes, and machihembras: children born as girls who grow into men. Cases are common enough that many can point to a guabidó in their extended family. Claribel was familiar with the words. Still, that didn’t mean she could look at her daughter and instantly figure out what was going on — or that she wanted to. […]

Read the rest of this story in the August 2017 issue of Harper’s.

Sarah A. Topol is a journalist based in Istanbul.