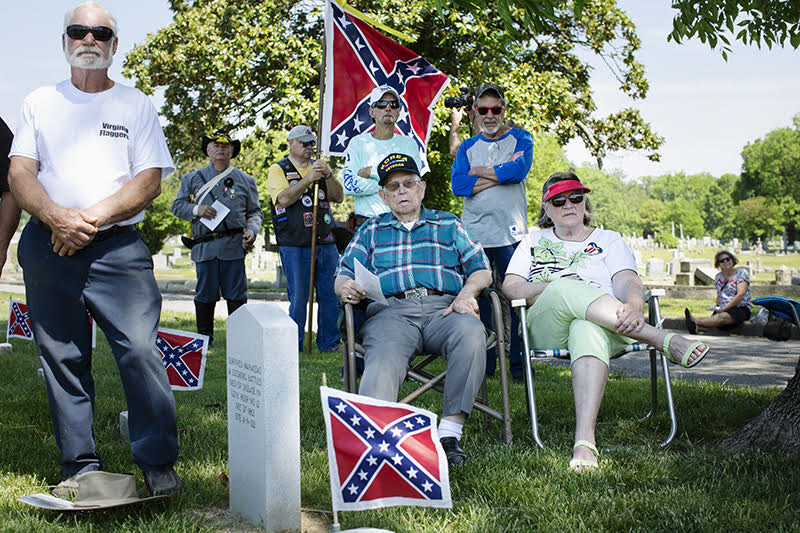 Dozens of kids mill around a sprawling field of grass, on a warm, fall day in Biloxi, Mississippi. They stare up at a man in his sixties, who is dressed in 19th-century clothing. There’s a table heaped with relics from the Civil War — satchels, binoculars, saddles, guns. And other adults, dressed in Civil War costumes, show the kids how to load a musket. One yells “Fire in the hole!” and a massive boom rings out.

The main event this weekend will be a mock Civil War battle, part of the annual Fall Muster.

But the real fireworks come in the words the kids hear from the reenactors, who talk about old times that are definitely not forgotten — but not accurately remembered. “You see, a Civil War is when one bunch of folks tries to overthrow the government, the sitting government,” says one reenactor, J.W. Binion. “We weren’t doing that.”

The kids here are on a school field trip. And they mainly look confused. Like they know something isn’t quite right here. You can especially see that in the faces of some of the African American students when a Confederate flag is unfurled and held up above them. “We wanted to establish our own country,” Binion continued. “We didn’t care that the North carried on and kept going the way they were going. That was fine with us, just leave us alone, let us build our own country.”

This alternative version of history is coming from a man dressed like Jefferson Davis — who was president of the Confederacy. This place is Davis’ former home, a vast estate called Beauvoir, one of the grandest Confederate historical sites in the South. Today, it has become a monument to everything he stood for.

In debates over Confederate sites like Beauvoir and memorials like the statue of Confederate commander Robert E. Lee in Charlottesville, site of the deadly Unite the Right rally in 2017, you’ll hear people defend them by saying they’re part of our heritage, part of our history.

But how is that history being told? And more importantly, who’s paying to keep it alive? We investigate these questions in this episode of Reveal. For more on this project, explore “The Costs of the Confederacy,” our partnership with Smithsonian Magazine.