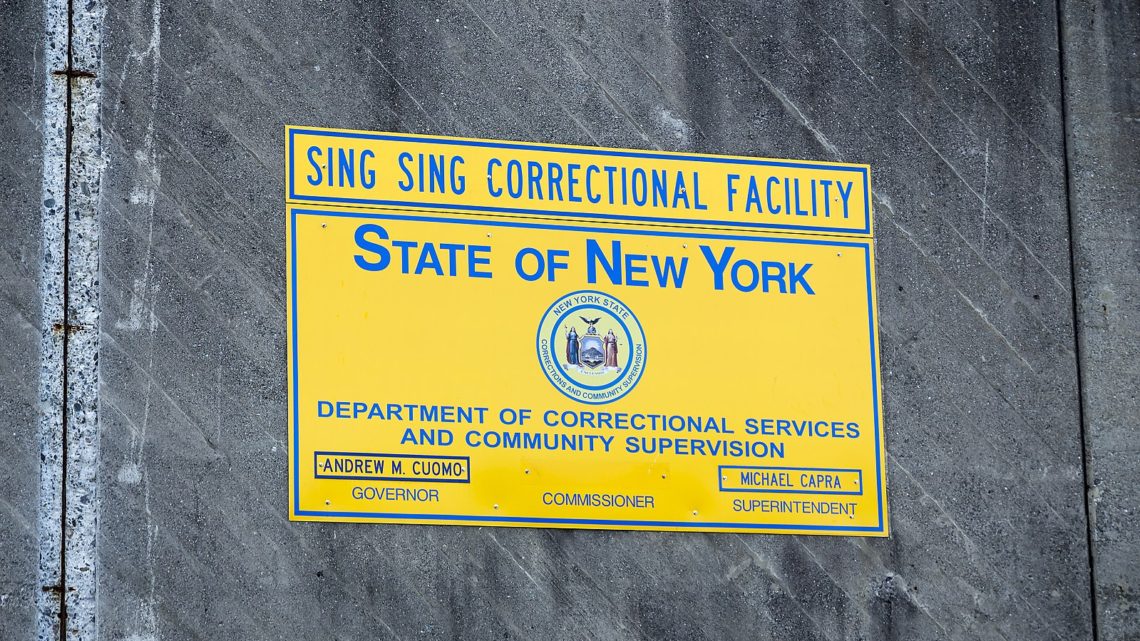 On Monday morning, I received a frantic message from a man at Sing Sing Correctional Facility.

A few hours later, he added: “He was in isolation for a couple of weeks complaining about loss of breath, all they gave him was generic Tylenol, he supposedly had Covid 19, I think his name was Mosquero…It’s getting crazy, guys are really scared.”

The New York Department of Corrections and Community Supervision (DOCCS) confirmed that Juan Mosquero, a 58-year-old incarcerated at Sing Sing in Ossining, New York, had died at approximately 7:43 a.m. on March 30, after having received emergency medical attention.

On Thursday, the Westchester County Medical Examiner confirmed that Mosquero had tested positive for COVID-19 ― the disease caused by the coronavirus. While the medical examiner has yet to determine the cause of death, if Mosquero’s death was tied to COVID-19, it would be the first fatality from the virus in a New York state prison.

At Sing Sing, men were already frightened before the death. On Sunday evening, Bryant called me to say he’d heard that someone who worked in the mess hall had tested positive for COVID-19. He feared the virus would quickly spread because even though the Centers for Disease Control and Prevention has recommended mitigation strategies for correctional facilities similar to those it has for the rest of the country — “Implement social distancing strategies to increase the physical space between incarcerated/detained persons (ideally 6 feet between all individuals, regardless of the presence of symptoms)” — there is no way to do so in prison.

Now, people inside Sing Sing, like others detained around the country, are desperate for both more protection and more information. They know the coronavirus pandemic is spreading in the U.S. broadly and in the prison system. The death was a reminder of just how dire the problem is, and how little they can do about it.

On Monday evening, according to several men at Sing Sing, Superintendent Michael Capra shared information about Mosquero’s death with the prison population. He said Mosquero had died of flu-like symptoms, and that the cause of death would be determined by the medical examiner’s office.

Bryant’s cell is on the level below Mosquero’s, and he said when officers came to remove Mosquero’s belongings, “They had on full gowns, boots wrapped up and everything. If he didn’t have the virus, why were they dressed like that?”

DOCCS would not respond to questions about Mosquero’s illness and treatment, in accordance with HIPAA, as of Wednesday, when this story was initially published.

As of Wednesday morning, 147 of the department’s approximately 29,000 employees had contracted COVID-19 statewide, according to DOCCS. Seventeen of the approximately 43,000 individuals incarcerated in New York state prisons had also tested positive for the virus. DOCCS did not provide numbers for COVID-19 cases specifically at Sing Sing, but Dorian Moore, the inmate grievance representative at the prison, said that during a meeting with Capra, the superintendent said that 50 staff members are currently out sick, 22 of whom have tested positive for COVID-19. Two civilian employees and one incarcerated person have also tested positive.

After his death, word spread throughout Sing Sing that Mosquero had died of COVID-19.

Jermaine Archer worked in the Sing Sing law library with Mosquero. They were considered essential workers, and were still reporting to work every day.

Mosquero “was funny, kind hearted, quick witted (even with limited english) and hardworking,” Archer wrote on JPay. “He was the porter, and when all of this began he made sure to bleach everything down as soon as we got there.”

Archer said that according to friends who work in the infirmary, Mosquero was quarantined there on March 20.

One advocate outside the prison said that Mosquero had been denied medical treatment on three occasions for his symptoms, according to someone within the facility. Another advocate told me that a friend at Sing Sing said he’d shared his own personal medication with Mosquero, who was not being given anything by prison staff.

The anxiety in prisons has been heightened in part because of the lack of information from official channels, which means that those incarcerated at Sing Sing and other facilities often rely on information passed amongst themselves.

Taverial Norman, 43, said that at Franklin Correctional Facility in Malone, New York, fights have broken out over men coughing within enclosed spaces.

“The anxiety is kicking in because the facility doesn’t let us know anything,” he said.

Norman said he and others in his dormitory watched as a building next to theirs was set up as a quarantine unit, but said that corrections officers go from that building into the rest of the facility. He said an officer who had been working in the quarantine dormitory had also been working in his dormitory for a few days, fell ill, and then, according to information Norman said came from officers, was told he shouldn’t go to work on Tuesday.

Norman had tuberculosis as a child and now has chronic bronchitis, high blood pressure and other illnesses that would make him highly susceptible to COVID-19.

“I literally stay in my cube under my covers basically the whole day,” he said, though even then it is difficult to stay 6 feet away from others in a dormitory shared with approximately 50 other men.

Norman’s wife, Keziah, said that in earlier conversations Norman said his hands were constantly shaking, he hadn’t eaten and was unable to sleep. She is especially worried, because her cousin works at Elmhurst Hospital in Queens, where she has seen firsthand the refrigerated trucks filled with bodies that the packed morgue cannot hold.

The couple have argued because Keziah has told her husband he shouldn’t leave his dormitory, even to make food.

“We had a huge argument because I told him, ‘You can’t cook right now. You have to eat out of a can,’ and he said, ‘I’m hungry. I haven’t eaten in a week,’” she said. “I know I’m really not patient right now, but with the spike in cases overnight in New York, it’s like I can’t even breathe.”

Many incarcerated people are worried that corrections officers, who are among the only people entering the facilities now that visitors are banned, could be bringing the coronavirus with them.

Mike Mazzella, mid-Hudson region vice president for the New York State Correctional Officers & Police Benevolent Association, said that corrections officers are doing their best but need more support from DOCCS to keep themselves and others safe.

Mazzella said that in his region alone, which has about 5,000 members in 13 correctional facilities, there are 261 corrections officers and sergeants quarantined, with 51 who have tested positive for COVID-19.

“After furiously advocating for our members to be able to wear N95 masks while on duty, the DOCCS finally started allowing it [on Wednesday],” Mazzella said in an email.

Mazzella is concerned that the directive on wearing N95 masks may have come too late, and also expressed concern that officers with weakened immune systems due to cancer and other illnesses were still being directed to work.

“At least, as of today, they will be able to wear a mask to keep them safer,” he said.

DOCCS said officers have been wearing masks when dealing with medical situations, noting that “[b]oth the CDC and New York State Department of Health have repeatedly stated that face masks should not be worn for general protection from COVID-19 and should only be worn by medical/first responder personnel who are working directly with individuals who are sick and those who are infected.”

Lawyers and prison advocates have been pressing for New York Gov. Andrew Cuomo (D) to release the elderly and those with underlying medical conditions that would make them more at risk of dying from COVID-19.

Jose Saldana, director of Release Aging People in Prison, said that even though he has heard from incarcerated men that cell blocks are being fitted with plexiglass to transform them into quarantine areas, it won’t be enough to stop the spread of the disease and the deaths that will come with it.

“These men and women have not been sentenced to death, but if they get the COVID-19 virus, the likelihood is they will die from it,” said Saldana. “[Cuomo] would then have transformed the New York state prisons into death camps.”

Steve Zeidman, a professor at the City University of New York’s School of Law, runs the school’s clemency clinic, which represents Bryant and a number of other men seeking clemency. He is pushing not just for the release of people who are vulnerable to the virus due to age or medical conditions, but for people like Bryant, who have served long sentences and demonstrated change. Bryant has started a number of initiatives behind bars, including a gun buyback program, and recently gave a talk on the impact of incarceration on children with parents behind bars as part of TedxSingSing.

“Social distancing in prison is not possible unless the number of people in prison is dramatically reduced. The looming crisis of COVID-19 in prison must be met with a much broader, and long overdue, approach to decarceration,” said Zeidman. “There are countless men in New York state prisons who merit release under any rational measure and yet are not old or sick.”

As inmate grievance representative, Moore says he hears daily complaints both from inmates and staff at Sing Sing about COVID-19. He has met with Capra, the Sing Sing superintendent, to discuss these concerns and praised his efforts.

“I must give Superintendent Capra the credit he deserves for trying to work with us as much as possible to quell the concerns and fear of the men here,” Moore wrote on JPay. But, he added, “Despite his efforts there is still not enough being done.”

“Truth is the conditions here don’t allow for certain precautionary measures to be taken, but there are still other things that can be done that aren’t being done,” Moore said.

Bryant’s friend Francisco Hernandez has been making masks by hand in his cell using handkerchiefs and cut up T-shirts, but for use for others, not those in the prison.

“[Francisco] and I are very concerned about the healthcare workers on the frontline, seeing many of them crying on the news is heart wrenching,” Bryant wrote. “We have families out there who may need [these] same healthcare workers, our communities seem to be stretched to capacity, so whatever we can do to help we are willing to.”

This article was updated on Thursday to reflect the news that Mosquero tested positive for COVID-19, according to the Westchester County Medical Examiner.