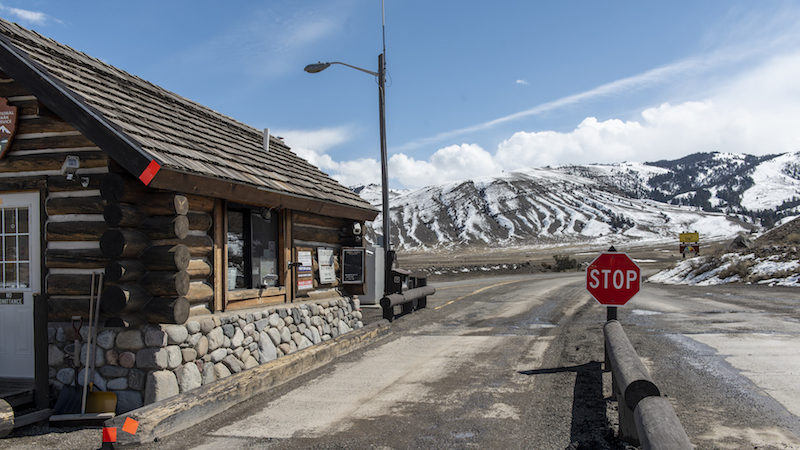 Last week, two of the country’s most popular national parks—Grand Canyon and Zion—announced that they were closing due to the coronavirus pandemic. Grand Canyon’s first positive case—an employee who worked for a concessionaire that operates the largest lodge in the park—was confirmed on Sunday, March 29. The park closed three days later. By the time Zion closed its gates, the number of confirmed cases of COVID-19 in the United States had far surpassed that of any other country, and the White House was warning of a grim week to follow. “We feel the park’s closure is essential to limiting the spread of the COVID-19 virus in Utah,” the mayor of Rockville, a town of just under 300 people outside of Zion, wrote in a letter to Interior Secretary David Bernhardt.

The Interior Department’s reluctance to close parks—especially those that draw large numbers of tourists—even as the pandemic is sweeping across the country is being criticized by current and former National Park Service staff who say that the inconsistent messaging and leadership’s failure to take decisive action is putting staffers, the public, and rural communities at risk. Today, more than 200 national park sites remain open. In contrast, Canada closed all of its national parks, historic sites, and marine conservation areas on March 25.

“The DOI response has been dangerously uneven and contradictory,” a veteran Park Service employee in Nevada told Sierra. “I would just describe it as chaos.” Even the NPS office of public health has urged stronger action. According to an April 3 memo obtained by Sierra, the office’s epidemiology branch chief has advised the Interior Department to restrict park access in communities where stay-at-home orders are in place and to discontinue dormitory-style housing for new employees and concessionaires. Failure to limit visitation to national parks, the memo warns, will increase the risk of negative outcomes for the federal workforce and the public.

“We can say with absolute certainty,” the memo states, “that leaving our parks open to the public when social distancing is not being practiced, onboarding employees originating from throughout the country and world, and permitting significant shared housing environments will result in a significantly greater burden of disease and death than if we had taken the proactive measure to continue to close these parks and/or limit operations.”

Other observers agree that the Interior Department’s actions have been irresponsible. The National Parks Conservation Association has called for the closure of all national parks and described the Interior’s approach as “beyond reckless.” Democrats on the House Committee on Natural Resources have asked the DOI to clarify its policy.

In many ways, the Interior’s handling of the public health crisis has mirrored that of the Trump administration more broadly. The department initially seemed to downplay the risk; in a March 5 memo, Interior Secretary David Bernhardt suggested that the virus was not spreading widely and that most people in the US had “little immediate risk of exposure.” According to one Interior employee who works out of the Washington, DC, office, as late as March 13, when school districts across the country had begun to close, it seemed like “all systems normal” at the Interior. Then, on March 18, Bernhardt announced that the department would be waiving entry fees at all national parks to make it “a little easier for the American public to enjoy the outdoors.”

At a moment when many people were craving open space, fresh air, sunlight, and perhaps an opportunity to get away from it all, the impulse was understandable. But it sent the wrong message: Already crowded parks saw a surge in visitors, sometimes overwhelming facilities and staff even as public health officials were encouraging Americans to practice social distancing or simply stay at home. Meanwhile, some parks were beginning to close—the Washington Monument shut down on March 14—but there seemed to be little coordination among NPS sites, and many of the busiest destinations remained open. Numerous parks across the country modified operations but didn’t close, leaving the public to navigate a rapidly evolving situation. At Joshua Tree in California, the park limited access to foot and bike traffic on Mach 21, but only updated its website that morning, which led to chaos and confusion at trailheads and parking lots.

Interior has since said that it is closing parks when local officials and in particular state or county health departments make the recommendation to close. On March 18, for example, Moab took the unusual step of closing campgrounds and hotels to all nonessential visitors. But Arches and Canyonlands, two of the most visited parks in the region, didn’t shut their gates until 10 days later. And it appears that the standard for closing has not been applied in every case.

Joan Anzelmo, who worked for the Park Service for 35 years and lives outside of Grand Teton National Park in Wyoming, says the NPS should have had a more coherent strategy from the very beginning as the dimensions of the pandemic came into focus. In early to mid-March, Anzelmo was already observing an uptick in visitors to Grand Teton. She was also hearing from concerned Park Service colleagues across the country, from Estes Park outside of Rocky Mountain National Park in Colorado and Grand Canyon, to Moab and parts of Hawaii.

On March 17, Anzelmo sent an email to National Park Service director David Vela, urging him to close all national parks and begin preparing for the wildland fire season, which is sure to be complicated by the pandemic. “An agency has to act quickly in a crisis,” Anzelmo said. “They have to have a unified message.”

Instead, the Park Service has taken a piecemeal approach, frequently closing sites only after media attention and local officials have exposed the dangers of keeping them open. As this story was being reported, dozens of parks and wildlife refuges across the country were still grappling with how to handle the spring season and a possible influx of tourists. Lake Mead National Recreation Area, which lies in Arizona and Nevada and is one of the most visited NPS sites in the country, is still up and running with bathrooms, picnic areas, and beaches open on the Arizona side—this despite stay-at-home orders in both of those states.

Parks are also struggling with how to handle the hiring of seasonal employees, who make up a substantial portion of the workforce, often come from out of state, and typically live in dormitory-style housing. In fiscal year 2019, the Park Service hired over 6,000 seasonal workers. As of last week, parks were still debating how to properly test, house, and quarantine workers coming into small communities from all over the country for the summer season, which is the busiest time of year for most national parks.

On April 5, Vela issued a memorandum limiting seasonal hires to essential workers such as law enforcement, fire, maintenance, and custodial staff through May 24. According to the memo, the use of shared housing for these workers must align with guidance from the US public health service. But the memo also notes that parks must be prepared to quarantine employees who test positive for the coronavirus and who may live in shared housing arrangements.

The Park Service did not respond to requests for comment.

Like all federal agencies, the parks are also scrambling to acquire the necessary personal protective equipment for employees who interact with visitors or who have to clean bathrooms and other facilities. According to an internal memo reviewed by Sierra, the NPS is developing a strategy for placing back orders with contractors as it develops a “longer-term solution for finding scarce supplies.” But the NPS employee in Nevada worried that the move wouldn’t be enough. “Big parks are going to eat through this stuff like candy,” the staffer said.

On paper at least, the Park Service should have been better prepared to address the coronavirus outbreak. Park Service employees are often confronted with high-risk situations, from search-and-rescue missions to simply managing large numbers of tourists from all over the world in areas where interactions with wildlife and natural features like cliffs and waterfalls can be dangerous or even deadly. The Park Service even has a little-known epidemiological unit that conducts human and veterinary disease surveillance and coordinates public education and messaging on related issues. In 2015, this division led the investigation into two human plague cases in Yosemite as well as multiple outbreaks of tularemia, a rare infectious disease that can affect animals and people. In 2010, the agency implemented a program that was designed to give individual parks greater leeway in addressing such risks at the local level and the power to recommend closure when necessary.

But the Trump administration, according to reporting by Mashable’s Mark Kaufman, has largely disregarded this bottom-up approach. Even as a number of individual parks, including Grand Canyon, were recommending closure, Interior officials seemed unwilling to act. According to the Interior employee in Washington, the layers of bureaucracy and approvals required from top officials—including Secretary Bernhardt—have crippled the agency’s decision-making powers. “In the case of the Park Service, he takes a keen interest,” the employee said. “It’s the most visible part of Interior.”

As of this writing, 10 National Park Service employees and two US park police employees had tested positive for the coronavirus, which accounts for a third of all confirmed cases at the Interior, according to two sources with knowledge of the figures. Meanwhile, rural communities with limited health care infrastructure in gateway towns are bracing for an increase in the number of sick patients. Anne Newland, CEO of North Country HealthCare, which operates a network of clinics in northern Arizona (including the only facility in Grand Canyon), says it’s inevitable that they will see more positive cases. The Navajo Nation, which straddles several southwestern states and is surrounded by major parks, has seen one of the worst outbreaks in the country. And in Flagstaff, Arizona, the only major hospital serving Grand Canyon Village and the neighboring community of Tusayan is already at capacity for critical care patients.

“My fervent hope is that the direction from [Arizona] Governor Ducey to stay at home, that people will follow that,” Newland said. “Because if we limit social contacts, we can limit the spread of the disease.”

Even if the spread of COVID-19 peaks in the coming weeks, and social distancing measures begin to flatten the curve, questions about how national parks will handle the busy summer tourist season remain unresolved. At this point, it seems unlikely that there will be any kind of systematic parkwide approach to addressing the pandemic.