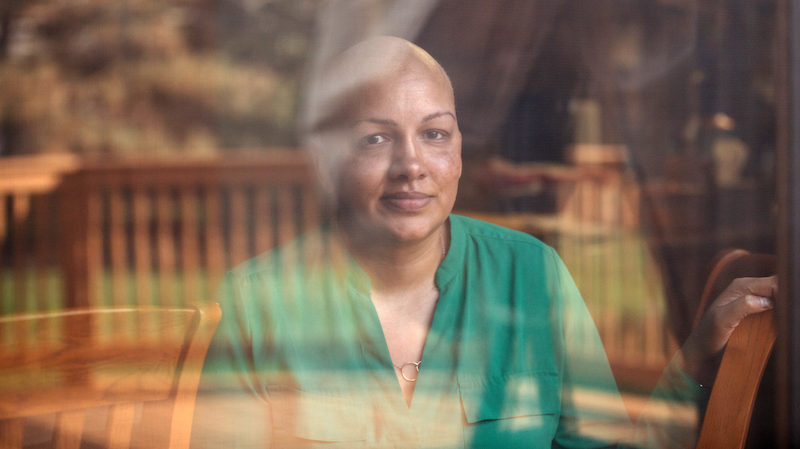 Sveta Desai does everything she can to reduce her anxiety as she awaits a double mastectomy.

Desai, 37, has inflammatory breast cancer, a rare, aggressive type that affects just 2% of American women with breast cancer. She started four months of chemotherapy to shrink the tumor last November and was scheduled for a double mastectomy on April 28 at Beaumont Hospital in Troy, Michigan. Then, the coronavirus pandemic postponed virtually all non-urgent surgery. Hers is now rescheduled for May 12.

When they met in early April, Desai said her surgeon “was adamant that I needed to do surgery” within four weeks of completing chemotherapy in order to maximize the impact while the drugs were still active.

Leslie Lindbloom has been able to continue her treatment for the same kind of inflammatory breast cancer, though her cancer has metastasized to the lungs, esophagus and collar bone.

“It may sound weird to say but for a person with one of the worst diagnoses you can get, I’m one of the luckiest people in the country right now, because I have access to medical care by incredible professionals who are continuing to care for me in the midst of a pandemic,” said Lindbloom, 62, a horticulturist who tends flower beds at a Grosse Pointe Woods, Michigan, country club.

Patients Are Still Being Treated

All over the U.S., large cancer centers are postponing surgeries so their operating rooms can be converted to treat patients with COVID-19, the illness caused by the coronavirus. Leading cancer groups have issued guidelines on which cancer patients have the most urgent surgical needs and may require an immediate operation ― those with infections from earlier surgery, for example. And most chemotherapy and immunotherapy treatments have continued, but under strict rules to ensure patients are protected.

“At this time there is no direct evidence to support changing or withholding chemotherapy or immunotherapy in patients with cancer,” the American Society for Clinical Oncology wrote in a statement to its members. The American Cancer Society and others have issued similar statements.

Lindbloom has faced two different types of breast cancer since her initial diagnosis in 2008, pushing her into the most advanced stage.

Since March 2019, she has been taking Tecentriq, an immunotherapy drug that has shown some success in treating advanced bladder and non-small-cell lung cancer. Tests indicate it is holding her cancer at bay.

She is part of a clinical study for women with a type of tumor known as triple-negative breast cancer that can be aggressive and more difficult to treat. She gets an infusion twice a month at the Van Eslander Cancer Center, part of St. John Detroit Hospital and the Ascension Michigan health system.

“My instructions are to come to the building wearing a mask,” Lindbloom said. “A masked staffer takes your temperature. Two weeks ago, I was the only person in the waiting room.’’

Once inside, she heads to the center’s infusion room, where patients typically sit hooked to intravenous machines. For the last month, patients have been spread out and curtained off, she said.

With golf courses closed for the pandemic, Lindbloom was laid off, but her employer, Lochmoor Club, has continued her health insurance. “They’ve had my back all the way through this.”

Until Michigan lifts social distancing orders, telemedicine will be one of the best ways for cancer patients to talk to their doctors. It might even be welcomed by the germ-conscious who already didn’t like going to busy hospital complexes where just finding a parking spot and walking to the cancer facility can be an inconvenience. 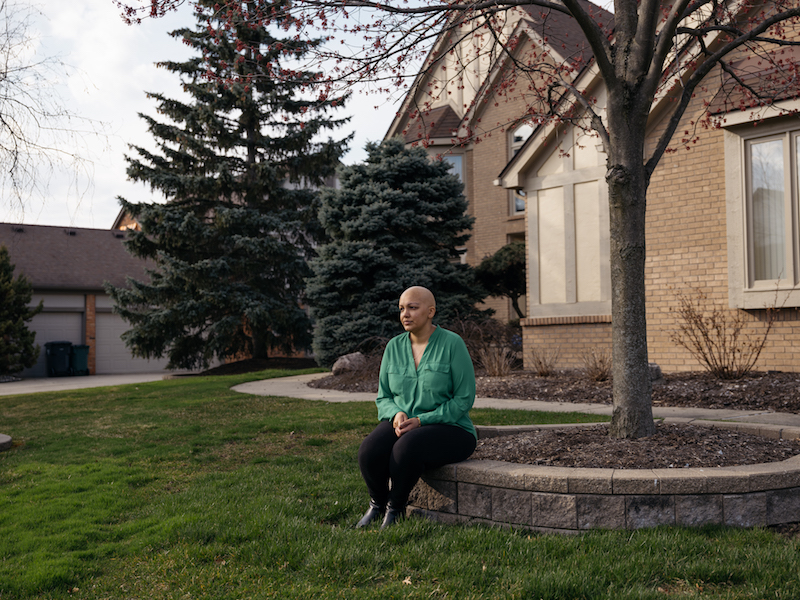 Sveta Desai outside her home in Troy, Michigan.

Dr. Michael Lutz, a Beaumont Health urologist, said these virtual visits are reassuring to many patients. He told one man whose prostate cancer surgery has been delayed that contracting COVID-19 “would be more detrimental to his survival than a delay in treatment of his prostate cancer,’” Lutz said. “He was totally content with that. He just needed to be reassured.”

Lutz tells his patients that prostate cancer is usually slow-growing. Some men with small tumors have held off on surgery for years, opting instead for tests every six months or so ― an approach called watchful waiting.

Some breast cancer surgeons use the same careful monitoring for women with very early breast cancer. Studies even show that women with slightly larger tumors don’t have to rush surgery.

But many factors go into this decision-making: the size and type of a tumor, whether it responds well to chemotherapy, if genetic markers predict poor outcomes, and more. Fortunately, genetic advances have given doctors new tools to determine who is most at risk of having a more aggressive type of cancer.

Using telemedicine visits, Lutz walks his patients through these issues. He finds the visits more engaging than being in a room with a patient. “What I’ve found, there is no distraction and our complete focus is on actually looking at each other’s face,” he said. “I’ve found it’s more intimate. It’s just the two of us. There are no phone calls. No interruptions. Nobody knocking on the door.”

“They tell me this is something we’d like to continue on a long-term basis because they felt it was a more valuable experience than if we were in the office together,” he said. “I believe for certain patients it will be a wave of the future.’’

‘The Decisions Are Made For You’

Desai tries to stay balanced working at home, practicing all the methods she’s learned to calm her fears. Before the pandemic, she also went to support groups at Gilda’s Club, a national support network named after “Saturday Night Live” comedian Gilda Radner, a Detroit native who died of ovarian cancer in 1989. The nonprofit is moving to virtual programs for the men and women who come to its three clubhouses in the area. Desai is looking forward to the online opportunity.

Anything that puts her at ease helps while she waits. She addresses her stress through virtual sessions with a personal trainer and therapist, meditation, calming apps and essential oils. Realistically, she’s relieved not to be having surgery at the height of a pandemic.

Her doctors have assured Desai that they expect to be able to perform at least a single mastectomy on May 12. But her surgeon may not be allowed to remove both breasts. Cancer is only present in one, and the hospital may consider removing the other to be an elective procedure. Her doctor told her the decision might be made as late as the night before her surgery.

“That’s frustrating,’’ Desai said. “It’s like I finally had a choice and now it may be taken away from me. You finally get to make a decision for yourself and then this happens. The decisions are made for you.”

Patricia Anstett is a medical writer who worked 40 years in newspaper journalism in Chicago, Washington, D.C. and Detroit, her hometown.