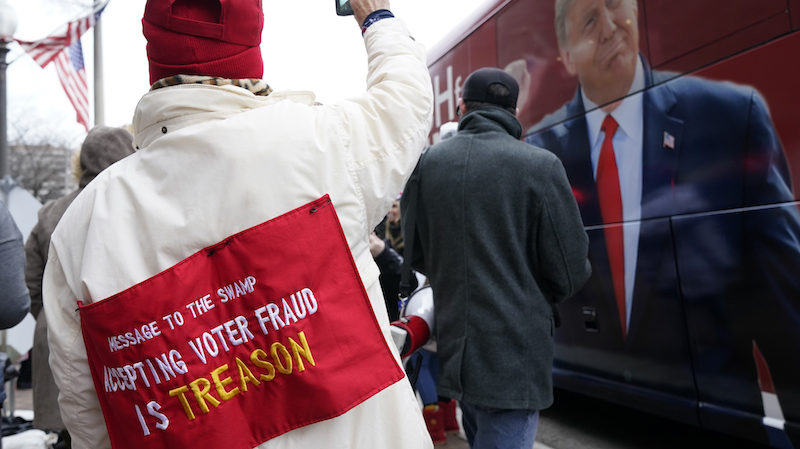 President Donald Trump’s post-election litigation was, in legal terms, a flop. In financial terms, however, it was an unparalleled success, generating hundreds of millions of dollars in donations. While a small percentage of that money was spent on doomed legal challenges, much of it went to pay off the campaign’s debts, straight to the Republican Party, or to finance a leadership PAC that Trump can use to fund his future ambitions. More than $2.7 million flowed from the Trump campaign to individuals and firms involved in the January 6 rally in Washington, D.C.

The former president isn’t the only one who cashed in on manufactured voter-fraud panic. Sens. Ted Cruz, R-Texas, and Josh Hawley, R-Mo., have both fundraised off the lie.

Further from the spotlight, a network of small nongovernment groups and right-wing personalities also used the discredited narrative of a stolen election to convince conservative Americans, rich and poor alike, to hand over their money. In some cases, new lawsuits allege, it may have been used to personally enrich the fundraisers themselves. Suits filed against the groups True the Vote and pro-Trump lawyer Sidney Powell’s Defending the Republic, along with some individuals tied to those enterprises, describe how they turned election fraud allegations into cash.

The fundraising continued long after it became obvious that the election challenges would fail, said Rick Hasen, an election law expert. “At some point, it became clear to any reasonable observer that the lawsuits were not going to change the results of the election,” he said. “The evidence was quite clear within a few weeks of the election that there was no massive fraud that could have affected its results. And so anyone making those claims is either deluding themselves or deluding someone else.”

At least one major donor, Fredric Eshelman, is now claiming that he was tricked. Immediately after the November 3 general election, Eshelman, a North Carolina Republican megadonor, decided that he wanted to back efforts to investigate election fraud. Eshelman has not been shy with his political spending: In 2020 alone, he gave more than $7 million to Republican political causes at the state and federal levels, most of it to a single pro-Trump PAC.

Two days after the election, Eshelman’s associates introduced him by phone to Catherine Engelbrecht, president of the Texas-based nonprofit True the Vote, according to court filings. Within hours of their first conversation, Eshelman wired her group $2 million to help fund its ambitious efforts to fight alleged election fraud.

True the Vote is one of the most well-known “election integrity” organizations. It dates back to the tea party movement of the early years of Barack Obama’s presidency and has a record of challenging election procedures and the eligibility of individual voters in a number of states.

Eshelman ultimately gave True the Vote a total of $2.5 million for its 2020 election efforts. True the Vote launched a massive undertaking in November to recruit whistleblowers, lobby legislatures, analyze data, and file lawsuits in seven battleground states. The project’s budget estimate of $7.3 million, as given in a project overview, was roughly 17 times True the Vote’s total 2018 revenue, the most recent year for which the group’s finances are publicly available. As part of the initiative, called “Validate the Vote,” True the Vote even budgeted $700,000 for a battle in the U.S. Supreme Court.

In the end, True the Vote filed suit in just four states and voluntarily dismissed those four suits just days later, before any hearings had taken place. The group has offered various explanations for the dismissals. In one email to supporters, the group referenced “an excruciating series of events that will one day be known, but now is not the time to air.” James Bopp, True the Vote’s general counsel, who brought those four suits, said that the decision was based on several factors, including his professional judgment that they weren’t going to bear fruit for his clients.

Eshelman and his advisers’ relationship with True the Vote soured around this time. According to Eshelman, the dropped lawsuits were a major part of this. Bopp, in an interview, contested that notion, saying that the relationship was strained by Engelbrecht’s hesitancy to pay a large invoice to one of Eshelman’s associates three days prior.

Through a representative, Eshelman said, “True the Vote failed, in every way, to make use of my donation to investigate and either prove or disprove election fraud, as agreed upon, and failed to respond to my requests for information about how the funds were spent. Any attempts by True the Vote to claim otherwise is a red herring the group is using to hide behind its deceptive and manipulative practices.”

According to court filings, the megadonor demanded a refund of most of his donation. When True the Vote offered to return only half that amount, Eshelman filed suit against the group in federal court, forcing open a window into its day-to-day operations for the first time.

The suit raised allegations against Gregg Phillips, a former True the Vote board member, who was listed, among other associates, as a defendant on the amended complaint. Phillips is best known as the original source of Trump’s bogus claim that millions of undocumented immigrants voted in the 2016 presidential election, costing Trump the national popular vote. But before he became the author of one of 2016’s most pernicious bits of misinformation, Phillips was a conservative warrior with a checkered past, including conflict of interest allegations in the Mississippi and Texas state governments. (Phillips, in news coverage, denied any wrongdoing in the incidents.)

In his suit, Eshelman accused Phillips, who sat on the True the Vote board of directors from at least 2015 to 2017, of siphoning funds from the group. The suit says Phillips formed an opaque entity, “OPSEC Group LLC,” just weeks before the 2020 election as a vehicle for moving funds. Public records show it was incorporated in September 2020; Phillips says it was founded in 2019. Eshelman’s lawyers alleged that Engelbrecht, the True the Vote president, is Phillips’s lover and that the pair actively conspired to defraud credulous conservative donors with talk of plans to detect voter fraud despite having no intention or ability to follow through. (Phillips did not respond to a detailed request for comment.)

Engelbrecht and True the Vote, as well as Phillips and OPSEC, denied these allegations in court. Among other defenses, they claimed that substantial work was accomplished as part of the “Validate the Vote” project. “Through its activities, True the Vote has acquired whistleblower testimony and information which has led to four indictments so far in Arizona, federal investigations in Nevada and Georgia, and investigations by Michigan officials,” a lawyer for both True the Vote and Phillips stated in court filings.

Phillips asserted that OPSEC, which has been paid at least $750,000 out of the $1.75 million budgeted for its work, secured four indictments for voter fraud in Arizona and looked into 364,000 allegedly suspicious voter registrations in Georgia in advance of the January Senate runoff election there. Dozens of Georgia counties disallowed True the Vote’s last-minute challenges to those voters, however, and the group is now being sued by, and countersuing, Stacey Abrams’s voting rights organization, Fair Fight.

Eshelman’s lawyers took a dim view of these accomplishments. “Defendants were not accomplishing much beyond spending Eshelman’s money,” they wrote in court documents. “They voluntarily dismissed four cookie-cutter lawsuits mere days after filing—at the incredible cost of more than $350,000 in legal fees.” The lawyers also noted that while True the Vote touts more than 360,000 voter challenges that it brought in Georgia, only a few dozen have reportedly been successful.

In early February, Eshelman withdrew his federal suit and filed a similar suit in Texas state court against Engelbrecht, her son, and True the Vote, alleging, among other things, that they made false statements to him to entice him to donate or, at a minimum, that the statements were made “recklessly without any knowledge of the truth.” Through a representative, he told The Intercept and Type Investigations, “I am committed to seeking justice in this matter and will vigorously pursue our litigation to get my money back.”

Bopp said Eshelman does not have the right to a refund because his gift was unconditional and that all of Eshelman’s claims about misrepresentation are based on a faulty notion that the gift was conditional.

Engelbrecht and True the Vote, though, aren’t the only ones facing lawsuits after lucrative fundraising followed by scant results.

On December 1, weeks after the election, Powell, the pro-Trump lawyer, incorporated a group called Defending the Republic. But she had been soliciting money under that banner at least since the web domain defendingtherepublic.org was registered on November 6, according to a lawsuit filed by Dominion Voting Systems, the voting technology company at the center of conspiracy theories circulated by Powell and others.

In the January suit, the company’s lawyers allege that donations to Defending the Republic are commingled with monies belonging to Powell personally and to her law practice. Powell directed questions to her attorney, who said, “We will be responding to the specific allegations in Dominion’s absurd lawsuit in due course.” (Powell’s legal team had not filed responses at the time of publication.)

According to screenshots included in Dominion’s lawsuit, Powell has raised money for Defending the Republic on both her personal and professional websites, instructing donors to make checks out to her legal practice or to “Defending the Republic LLC,” which is not a registered LLC, and mail them to her business address.

In late November, Defending the Republic, which sometimes does business as the Legal Defense Fund, presented itself to potential donors as a tax-exempt 501(c)(4), the suit argues, despite the fact that articles of incorporation were not filed until December. According to its website, the group has a pending application for 501(c)(3) status. Powell’s attorney did not respond to questions about these allegations and directed us to Defending the Republic’s website. (Type Investigations and The Intercept requested that Powell produce the application for nonprofit status, as required by law, but she had not produced it by press time.)

The suit said Powell and another pro-Trump lawyer, Lin Wood, undertook election denial activities for money and fame: “Powell and Wood filed their election lawsuits—which never had a chance of reversing the results of the election—with the obvious and cynical purpose of creating court documents they could post on their fundraising websites and tout as ‘evidence’ during their media campaign, to raise funds and their public profiles.” (Wood, who was not named as a defendant in the suit, did not respond to a request for comment.)

Dominion has filed a related lawsuit against Trump’s personal lawyer, Rudy Giuliani, similarly alleging that he “cashed in” on voter fraud conspiracy theories using his podcast, “where he exploited election falsehoods to market gold coins, supplements, cigars and protection from ‘cyberthieves.’”

With over 70 percent of Republicans still believing that the election was stolen, groups and individuals dubiously promoting “election integrity” and raking in large donations are likely to remain a presence for some time. While Powell and Giuliani could face “some real legal jeopardy” for allegedly defaming Dominion, Hasen said, it might not dissuade election fearmongering more generally: “I think there are probably ways to make baseless fraud allegations in the future without running the risk of defamation.”

This story was produced in partnership with Type Investigations with support from the Puffin Foundation.