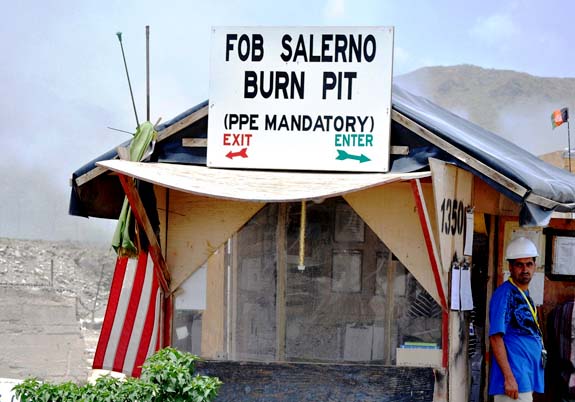 Conclusions in scientific studies can often be discovered not at the end but between the proverbial lines of any given report. Certainly that is the case in the recent Institute of Medicine study, “Long-Term Health Consequences of Exposure to Burn Pits in Iraq and Afghanistan,” that found no conclusive proof that dust and pollution in the war zones of Afghanistan and Iraq have caused illnesses in American troops and the local populations.

However, deep in the report, the researchers concede there is no data disproving a link, only that they did not find it conclusive in confirming the connection between sick soldiers and the environment where they deployed. In fact, the researchers write, “Information on exposures to mixtures specific to burn pits is minimal.”

Consequently, the researchers relied on studies of firefighters and workers at municipal incinerators as workers exposed to chemical discharge similar to burn pits. “It was hoped that those populations would provide information useful for assessing possible long-term health effects of exposure to such mixtures.” The researchers then concluded that “an increase in risk [of cardiovascular disease] cannot be ruled out.”

Elsewhere in the report, researchers conceded that “shortcomings in research and gaps in evidence” prevented them from determining conclusively the health impacts of burn pits.” While admitting a rise in pulmonary diseases in troops, most likely from exposure to a variety of airborne pollutants, the report recommended further study.

However, other health professionals who have dealt directly with soldiers exposed to burn pits have reached more forceful conclusions. Anthony Szema, head of the allergy diagnostic unit at Stony Brook University hospital, told me in a telephone interview earlier this year for a Virginia Quarterly Review story on burn pits that no one understands the consequences when thousands of carcinogens burning at once become airborne and are inhaled by people 24 hours a day for months at a time. “Not many people, the general public, are aware of the implications of these exposures,” Szema said. “It’s a new disease. This is not something that has been described before.”

Further study is certainly warranted, but investigations should not be used as an excuse for the government to avoid accepting responsibility for exposing soldiers to toxins that the US Environmental Protection Agency bans, because such toxins when released into the air can contribute to the risk of cancer, asthma and reproductive problems. The EPA also prohibits open pits burning grass and leaves, and food and petroleum products such as plastic, rubber, and asphalt. One further area of study then would be why the EPA standards were not applied in Iraq and Afghanistan. If a chemical discharge is deemed harmful in the United States, then it stands to reason the same discharge would be equally harmful if inhaled in another country.

By their nature, scientific studies look for absolutes. Such and such has been found to be thus and so. The lack of a definite answer in this case, however, does not mean the complete absence of an answer. No one questions that soldiers are returning with severe respiratory diseases. No one questions that they have been exposed to toxic fumes from burn pits. Common sense, as well as our own body’s reactions, tells us breathing the fumes of burning plastic is harmful.

Last year, long before the IOM report, the US government acknowledged the injurious effects of burn pits. According to a report released last year (PDF) by the United States Government Accountability Office, “burn pits help base commanders manage waste, but also produce smoke and harmful emissions that military and other health professionals believe may result in acute and chronic health effects to those exposed.”

So while further study may elicit more information about the effects of breathing burn pit fumes as well as the dust in Afghanistan and Iraq, the verdict appears to be in, and that is that the government knows that just breathing the air poses severe consequences to its soldiers.

“The [health] system is going to be overwhelmed,” Szema told me, with returning veterans suffering from pulmonary diseases. Some vets have died as a result. In May, I interviewed the widow of Iraq War veteran William McKenna for an Investigative Fund story on veterans who survived multiple tours of war zones only to die at home from exposure to toxic burn pits. Before he died of cancer, his Florida physician Donald C. Doll wrote to the VA in May 2010. McKenna, he said, was “exposed to multiple chemicals and toxins by the burn pits while serving in Iraq…. [E]xposure to chemicals and toxins have been linked to the development of lymphoma…. [T]his exposure to chemicals and toxins while in the military in Iraq is a causative factor in [Mr. McKenna’s] lymphoma.”

As one soldier in Afghanistan told me, burn pits were “way bad” but “you’d have a hard time convincing anyone to put garbage convoys on the road, where they are at additional risk of IED ambush and put an additional strain on already limited tactical resources.” So in other words, it’s cheaper to burn despite the risk to soldiers. Here is an area for a follow-up study; what shortcuts were taken in the two wars and what dangers did these short cuts pose to US soldiers and civilians?

Perhaps, in the end, we simply need to know that “war is not healthy,” as another US soldier in Afghanistan told me. “Being around explosions is not healthy. The best thing to do is avoid it.”