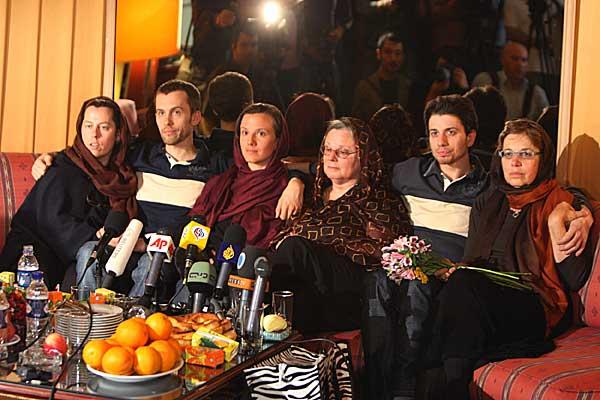 From left: Cindy Hickey and her son Shane Bauer, Sarah Shourd and her mother Nora Shourd, and Josh Fattal with his mother Laura Fattal at the Esteghlal hotel in Tehran on May 20. | Credit: AP

UPDATE: Upon their return to the United States, the mothers were interviewed on Democracy Now! Watch the interview.

After long weeks of waiting, the mothers of Investigative Fund reporter Shane Bauer and his two companions, Sarah Shourd and Josh Fattal, imprisoned in Tehran since their arrest near the Iraq/Iran border in late July, were granted visas to visit their children for the first time. The three detainees and their mothers met at a Tehran hotel, where they held a brief press conference. Officials at the Swiss Embassy, who have served as liaisons with the three Americans since their arrest, arranged the gathering.

This is wonderful news to all of us who have been concerned about their well-being, although a date for their release remains painfully elusive. On Wednesday, Iran’s Minister of the Interior, Heydar Moslehi, reitereated the preposterous charges against the three, calling them “spies.”

For information on how to support Shane, Sarah, and Josh, go to freethehikers.org.