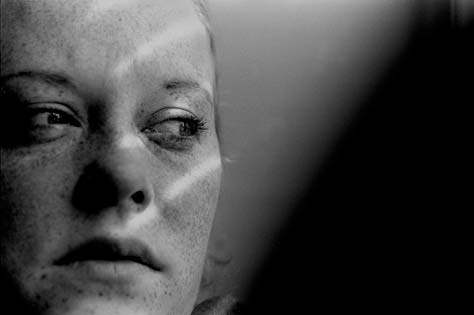 The wartime journalist is a curious creature. He or she must stomach devastation and turn it into digestible fodder for the outside world. “War was unbearable for me,” the legendary documentary photographer Eugene Richards said at an event in Manhattan earlier this month. “I hated that I was earning my living from it. I had to stop.”

Richards turned his eye toward other, equally challenging subjects, spending time documenting the lives of the mentally ill in places as diverse s Hungary, Armenia, and Argentina; communities suffering under extreme poverty in Niger; and the underworld of cocaine addicts in New York and Philadelphia. But when the Iraq War began churning out victims, he couldn’t sit idly by. He was “desperate to respond, felt like the most worthless person in the world for not responding.” And thus was birthed the ex-war reporter’s answer to war: a photo documentary project that would tackle the impact of the battlefields back on American soil, in the homes of families and veterans whose lives were forever changed by Iraq.

The series of portraits, titled “War is Personal,” started as a smaller project made possible by The Nation Institute’s Investigative Fund and first published as a series of photos in The Nation. It expanded over time, and last year won the World Press Photo Award’s top prize. On February 17, Richards joined Pulitzer Prize-winning journalist Chris Hedges, another celebrated former war reporter, for a public conversation at New York City’s Brecht Forum to commemorate the newly released War is Personal book.

In the audience sat Carlos Arredondo, one of the more striking figures portrayed in Richards’ photo series. Arredondo made national headlines back in 2004 when Marine officers showed up at his door to tell him his son had died in battle in Iraq. After repeatedly begging the officers to leave, Carlos climbed inside their van, doused it with gasoline and lit it on fire. “That was the moment,” he told the audience, “I started making my point of view clear about all this.” The Marines managed to pull him out of the flames, but he attended his son’s funeral on a stretcher, covered in second and third degree burns. Carlos told me he let Richards into his home because “I needed to bring the story of what happened to us to the rest of the world.”

Arredondo is one of many people whose pain and trauma come to life in the photographs Richards flicked through at the panel. One mother cradles her son, who lost 40 percent of his head, and brain, to an exploding grenade. Another veteran holds his young daughter with a metal claw. A fierce, paralyzed vet convulses in pain due to an accidental med overdose. A soldier who has been redeployed kisses his sleeping children goodbye. Richards said that one retired medic suffering from PTSD told him he had picked a possible date to kill himself.

Hedges, a fellow at The Nation Institute, offered his own reflections on wartime reporting. “I quit covering war for the same reason a junkie decides not to shoot up heroin anymore,” he told the crowd. “It was killing me. Emotionally, physically.” He went on to describe war reporters as “a tribe of broken misfits going from war to war to war” and said, “It was a very hard process to extract myself from because when you’re there, at least people understand your bizarre pathology. You reach a point where you can’t function in a non-war environment.”

While avoiding the battlefields of Iraq, Hedges’ found another way to report on the devastation of the war, conducting with Laila Al-Arian fifty interviews with US veterans about the atrocities they had witnessed committed by US troops in Iraq. That Investigative Fundarticle resulted in a book, Collateral Damage (Nation Books).

The vivid interviews that form the basis for Collateral Damage have their echoes in the images in War is Personal. Each journalist uses distance from the war itself as an opportunity for assessing its deepest wounds.

The intimacy in Richards’ portraits, like that in many of Hedges’ interviews, is breathtaking. Under Richards’ deft eye, these subjects make the scars of the Iraq War visible, even for those who have tried to tune out the horror. But Richards is realistic about his role. “I’m not a believer in photography’s power to affect deep change,” he told me. “Society is so deep in imagery, so overwhelmed, that all you can do is stop people and make them care for a minute, by making them as a close to those suffering as possible.”

Richards’ “War is Personal” photographs are on exhibition at 401 Projects in New York City. Chris Hedges’ 2003 book, War Is a Force that Gives Us Meaning, offers a searing critique of war reporting; his latest book is Death of the Liberal Class, just out from Nation Books.

Carmel DeAmicis joined The Nation as an intern in January 2011 after working as a news reporter for a Dubai-based television station that broadcasts across the Middle East and North Africa.