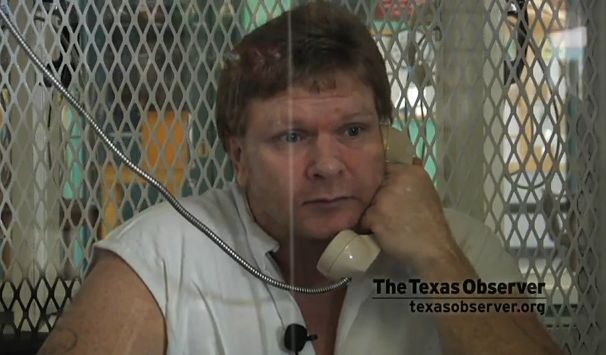 When Texas reopens its execution chamber after a Thanksgiving break, the first man set to die may be mentally retarded. A 2002 Supreme Court ruling bans the execution of mentally retarded prisoners.But after years of being represented by a discredited attorney who ruined any chance for an appeal based on his disabilities, the fate of Bobby Wayne Woods rests with the state Board of Pardons and Paroles which can recommend clemency or a reprieve to Gov. Perry. “It’s a long shot at best,” Woods’ attorney Maurie Levin says of the clemency request, “but I think it’s very important to do.”

Test scores during his childhood and incarceration show Bobby Woods has an IQ that hovers at or below 70 — the cut-off point for mental retardation. He reads at a second grade level and writes childlike letters — many of which are photocopied and presented as evidence in his clemency request. Levin asked the board to grant a 60-day reprieve so that she can produce a videotape of Woods “to adequately present a full picture of his limitations.” She has sued Texas prison officials over their refusal to allow her to record such a video herself.The Texas Observercaptured Woods on tape last week during an on-camera interview, and now you can watch the video that Levin wants the clemency board to see.

Woods was sentenced to die in 1998 for kidnapping, raping and murdering 11-year-old Sarah Patterson. He disputes his guilt, saying his cousin is responsible for cutting Patterson’s throat. But the cousin committed suicide the week following Woods’ arrest. Levin acknowledges “the facts of this crime are very difficult,” but she notes the ban on executing the mentally retarded applies no matter how heinous the offense. Levin and students with the Capital Punishment Center at the University of Texas Law School began working on Woods’ case just before he was scheduled to be executed in October 2008. Their efforts followed years of cringe-worthy legal representation by Richard Alley, one of just two attorneys the Texas Court of Criminal Appeals has removed from its list of lawyers qualified to represent death row prisoners in their appeals. He visited Woods only once during the nearly 10 years he represented him.

“For the state of Texas to appoint a lawyer who they then removed from the list — who was being taken to task in a federal court at the very same time he’s being appointed to represent Bobby in his federal proceedings, and then for Bobby — a mentally retarded man — to suffer the consequences of that appointment is atrocious. It infuriates me,” Levin says.

Alley had a habit of recycling direct appeal claims in his state capital habeas cases. While he raised 28 issues in Woods’ state habeas appeals, just two were actually new and neither was backed by useful evidence. In contrast, Levin and her students were able to contact family members who described how Woods was a slow child who suffered from learning disabilities and was called “retard” by his classmates, and “always needed to live with someone who could take care of him” when he was older. Their investigations revealed that while Woods had held a steady job as a short-order cook at Waffle House, he had to have the orders read aloud to him.

Alley did file an appeal claiming Woods was mentally retarded, but it was poorly put together and the court rejected it. Levin won a rare second chance to present new evidence in October 2008, but she was unable to reach a higher bar set by the court because it was his second time making the appeal. This second appeal had to overcome the previous legal record established on almost no investigation of Woods’ mental capacity.

Levin could not claim that Woods suffered from ineffective assistance of counsel either. While a Texas statute guarantees Woods an attorney to file his habeas appeals, it doesn’t require him to be competent. So Woods remains scheduled to be executed on Dec. 3 pending a decision by the Board to recommend that Perry have mercy and grant him clemency or a reprieve. Below are additional videos that may be used in evidence. Woods has reached the end of the legal process. His only opportunity now resides with Perry and the parole board.