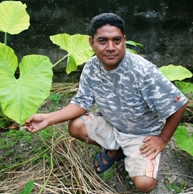 Giant tides inundated the remote atolls of Micronesia last December, scouring beaches, damaging homes and inundating banana and taro crops. The President of the Federated States of Micronesia, Emanuel Mori, declared a nationwide state of emergency and relief rice was shipped in. But on several atolls in Yap, one of Micronesia’s four states, taro planted in elevated concrete pits survived.

“This is a way to save the people here,” said Stephen Mara, an agriculture teacher at a high school in Yap. Devastating tides, called “king tides,” are one way sea level rise will manifest itself across the western Pacific in the coming decades, said Charles Fletcher, a University of Hawaii coastal geologist and co-author of a recent report on food security and climate risks in Micronesia.

Long before Pacific islands drown, as politicians and the media often predict, the islands may become uninhabitable from a lack of food. Fletcher, in particular, doesn’t think life on the atolls can last without constant humanitarian aid. But concrete may provide a respite, at least temporarily.

During the 1970s, locals planted taro on concrete left behind by the U.S. military, which occupied several Micronesian islands during World War II. This launched a trend toward growing taro inside protective concrete, said John Sohlith, the deputy director of Yap state’s Department of Resources and Development. Through the 1980s and 1990s, his office worked to overcame kinks with the system. Concrete pits flooded; drains were installed. Big pits were tough to fill; workers lowered the walls and shrunk the size. The winning design now has waist-high walls and is the size of a large pig pen. Pits have been installed on atolls across Yap state. Three years ago, two pits were constructed on Falalop Island, where Mara teaches.

“At first, people said, ‘No, never mind, it’s a waste of money,'” said Mara. But concrete pits survived a king tide while local plots that had been used for generations were inundated. “Now people look at it this as one of the best ways to grow taro,” he said.

Mara studied agriculture at several U.S. colleges and spent summers on farms in Arkansas and Mississippi, but returned home to put his new skills to work. Today he is growing sweet potatoes on pipes hung from racks, and last year, he successfully grew hydroponic carrots and cantaloupes. Many islanders had never tasted such things. “Our cantaloupes were huge and delicious,” said Mara. “Everyone wanted a piece of that.”

Mara’s classroom is a tiny building with a tin roof and concrete floors, under the shade of a massive mahogany tree. On the walls are colorful clippings from garden magazines of cherry tomatoes, snap peas and acorn squash. On a plot besides the building he plans to grow cabbage, eggplants and cucumbers once he gets enough money for the seeds. A path through a banana grove leads to a dilapidated concrete taro pit beside a landing strip that runs the width of the island and is one of only two reliable runways across the atolls of Yap. The pit is leftover from a defunct earlier project, built shoddily with brackish water mixed with the concrete, walls that are too high and soil inside that is too sandy.

But Mara is resuscitating it. With compost that consists of leaf litter, branch clippings and fish guts, Mara and his students are growing two varieties of taro as well as Chinese cabbages. His dream is for every family to have a pit, and to be able to stay on his island. “People are worried about their homes and their land,” said Mara, “because once the water comes back, where are they going to go?”