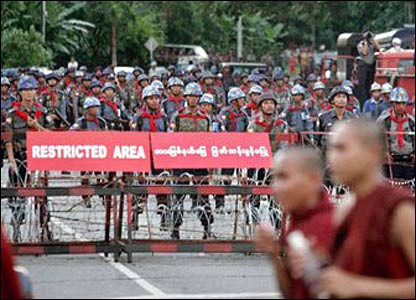 Picture taken by someone inside Burma, emailed to BBC News, during the 2007 Burmese uprising.

As it has become clear that Western sanctions on Burma will be dropped, the once-sleepy city of Rangoon has become like a gold rush village. The few business-class hotels in the city centre, once so empty you could walk whole floors without seeing anyone, are now taking reservations months in advance. Every day, business delegations tour Rangoon and Naypyidaw, the capital.

Conferences, a new phenomenon in Burma, are sprouting up: oil industry conferences; aid conferences; conferences on media reform; conferences on the financial sector. The Burmese are beginning to pick up the jargon and to speak of “building capacity,” and “sustainable engagement.” Outside the venues, street sellers offer souvenirs, snacks, and newspapers. Returning exiles are setting up businesses to cater for travellers, while top-end travel agents, who have struggled, are now inundated with requests.

The thaw in Burma began when the military regime disbanded following rigged elections it held in November 2010. A new government, led by Thein Sein, a former army officer, allowed the opposition National League for Democracy (NLD), led by Aung San Suu Kyi, to contest new elections after years of repression. These by-elections, dominated by Suu Kyi's party in early April were the first free elections in Burma since 1990 and let the opposition into parliament. Suu Kyi has welcomed a partnership with Thein Sein, and has privately told supporters that she believes the president's motivations are genuine. In mid-April, David Cameron paid a visit, the first major western leader to do so in decades.

All this has led investors to look on Burma as a potential emerging market. In winter and early spring, delegations of European, American, Japanese, and Singaporean companies travelled to Burma and powerful individual investors and venture capitalists have plans to invest. Banks including Standard Chartered are interested in setting up in Burma, as are manufacturers such as Suzuki. As Mark Mobius of Templeton Emerging Markets group recently told reporters: “Myanmar is where Thailand was in 1970 probably. They've got a lot of ingredients that could lead to very high growth.”

Until recently, the idea of fund managers and banks pushing to get into Burma would have come as a shock. A litany of human rights abuses by the government had led the west to impose sanctions in the 1990s. This only added to an already unamenable climate for investors, who often found themselves dealing with an unpredictable and Byzantine government, which was prone to nationalising or even suddenly cancelling projects. Campaigns by human rights groups forced companies such as British American Tobacco, to leave.

Though the west levied sanctions, others — South Korea, Singapore, Thailand, India and China — did not. So, an American, European, or Japanese telecommunications company with plans to expand into Burma would have to compete with the Korean giant Samsung, which never left. Western oil companies wanting contracts from the government would have to compete with the China National Petroleum Corporation. Despite anti-China sentiment among some Burmese, the Chinese companies are so entrenched that it would be very hard to displace them.

Now the government has liberalised investment laws, freed the currency from its previous confusing and corrupt dual exchange rate, launched plans to end the country's myriad civil wars, invited back the IMF and other international financial institutions, opened up the media, and encouraged foreign direct investment. The government has also announced that it will start letting in foreign banks.

All of which is positive. However, although a comparison with the reforms enacted in China and Vietnam is tempting, in the short term Burma will not be like Vietnam or China. Both nations have always had strong civil and political infrastructure. Burma now is comparable to a shattered African nation like Angola. Burma was shut off from the outside world by a military coup in 1962. Five decades of army rule left a crumbling, impoverished nation, with little infrastructure. In the past two decades the military government decimated the country's workforce, closing most universities to prevent anti-military protests. Now Burma has only a handful of educated people. Growth will come — but slowly, at least outside the natural resources industries.

Neither Suu Kyi nor Thein Sein has total control of the situation in Burma. Within the democratic opposition, some activists worry that Suu Kyi already has moved too far to compromise with the government, potentially making it harder for her to criticise what it does; there are even rumours that she will soon take up a Cabinet post, though she denies them. Meanwhile, though Than Shwe, the former military ruler, appears to have formally retired, he has seeded the government with hard-liners, some of whom are obstructing progress in order to preserve power for the military. Burma has had periods of openness before, in the mid-1990s and early 2000s, though neither was as significant as today's. On both occasions, hardliners simply decided to stop the reforms and the country went back into the dark.

Support for this research was provided by the Nation Institute's Investigative Fund, now known as Type Investigations.

Joshua Kurlantzick is senior fellow for Southeast Asia at the Council on Foreign Relations (CFR).