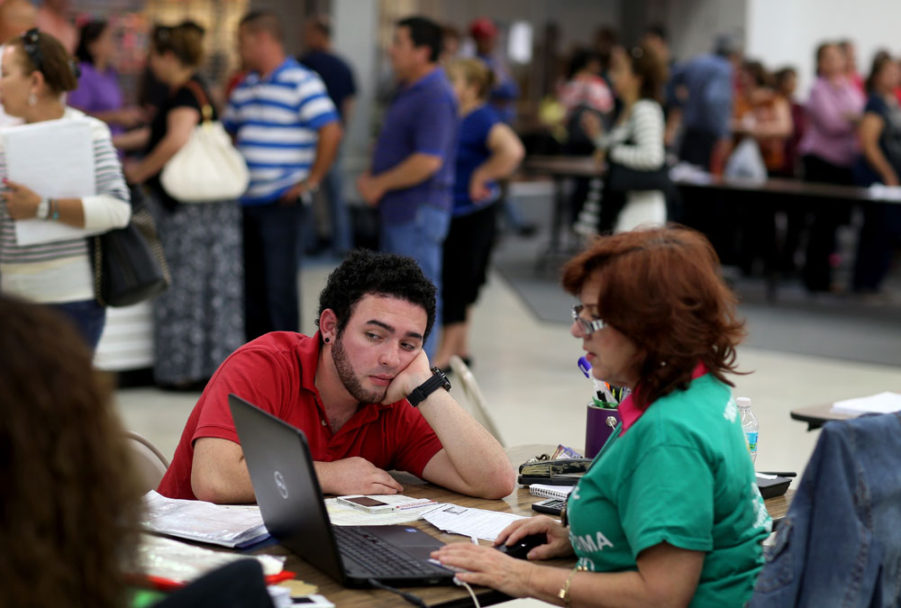 There are many ways to judge the Affordable Care Act, but the well being of Jolie Solomon is surely one of them.

Solomon is a single mom with a 19-year-old daughter. Both of them have had the kinds of chronic, debilitating health problems that routinely send families into financial crisis — theirs included.

Over the past several years, Solomon has racked up hundreds of thousands of dollars in medical debt, blown through 35 years worth of savings and landed in foreclosure. “My healthcare premium was $1,400 a month,” Solomon says of one of the plans she held before Obamacare came along. “And our pharmaceutical bill was about $1,500 a month, in cash.”

Jolie and her daughter live in Maplewood, a middle class suburb of Essex County that butts up against the endemic poverty of Newark and Irvington. If the Affordable Care Act’s first year in Newark has been defined by the dramatic expansion of Medicaid, in places like Maplewood, the crucial change has been a proliferation of affordable choices for insurance shoppers.

Solomon was among the crop of motivated consumers with pressing health issues that everyone expected to sign up for Obamacare right away. The plan she bought not only brought her family’s costs way down, it let them both get care they’d put off. She says Obamacare saved her life.

Until the day she opened her mail and found herself in the sort of familiar fight she thought Obamacare was supposed to end.

“I call them and I say, ‘Why am I getting a bill for this?!’ ” Solomon recalls. “They say, ‘Oh, no you haven’t hit your out of pocket maximum.’ ” Now she’s once again facing thousands of dollars in medical bills.

Brendan Bietry is a case manager for the Patient Advocate Foundation, a national social service agency that helps people with chronic conditions navigate the health system. He says the Foundation’s hotlines around the country are buzzing with patients who are experiencing sticker shock like Jolie Solomon. “We’re really getting kind of a flood of this particular issue,” Bietry reports.

The Affordable Care Act is not designed to wholly remake the insurance market, but rather to reform it by leveraging classic market forces in the war against rising costs. It aims to give insurance shoppers better choices, force transparency from insurance sellers, and allow good old fashioned competition to do the rest.

Everybody agrees it’ll take years to see if this truly works. But one thing is already clear: Insurers are competing fiercely to keep their monthly price tags as low as possible. And that competition is intensifying another market force.

“There is definitely a general trend towards consumers having to pay more of their own health care costs,” says Larry Altman, of Horizon Blue Cross Blue Shield, New Jersey’s largest insurer. That’s a trend that stretches beyond Obamacare plans, he stresses, “and quite simply, that is because that is a way to reduce the premiums.”

But patients with expensive, chronic conditions are already seeing painfully familiar challenges with the insurance marketplace. In Florida, HIV activists have filed a federal complaint against four insurers that they say are violating new rules that protect consumers with pre-existing conditions.

“I don’t think anyone knows at this point how well the system is going to work,” says Seton Hall law professor John Jacobi, who is part of a research team that plans to track the experiences of consumers in New Jersey’s marketplace.

Jacobi worries that the Gov. Chris Christie’s refusal to establish a state-run exchange will make local consumers more vulnerable, because the state may not be as actively engaged as needed in enforcing the reforms that are supposed to protect people like Solomon.

“It could be that it will work perfectly,” Jacobi says, “that every interaction between consumers and their insurance company will work out more or less as we wished they would. Historically, there has been friction.”

So far, it is hard to track what friction may be occurring. Neither the New Jersey Department of Health or the Department of Banking and Insurance, which regulates the insurance industry, would speak with WNYC about how well the exchanges are working. The Affordable Care Act mandates that states provide