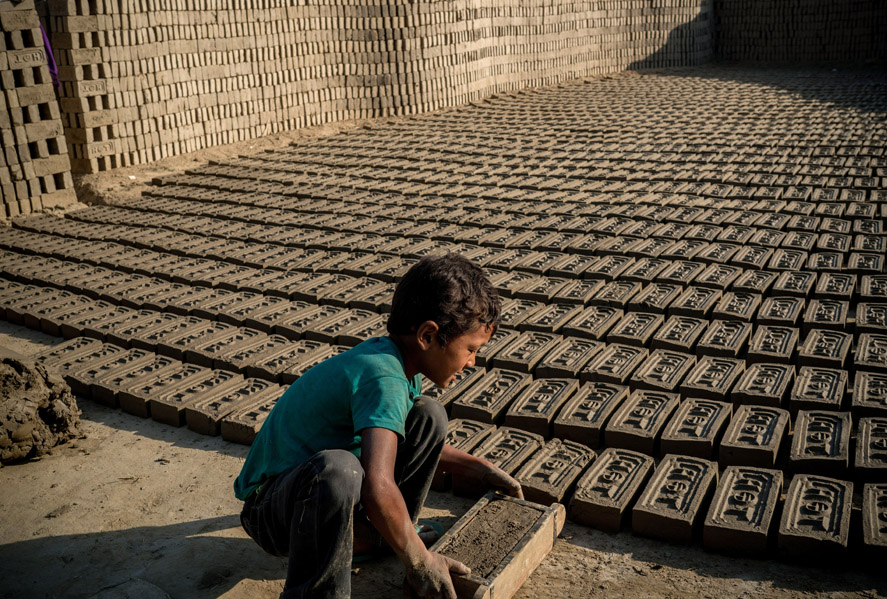 One frigid afternoon in January 2013, a man approached three brothers playing in a field in Kudiya, a hamlet in the northern Indian state of Uttar Pradesh. He had some paying work for them, he said, a loading job, if they were interested.

The Gupta brothers — Amrit Lal, Nakshed, and Akhilesh — recognized the man as Bhola Khan. Khan was in his twenties, and lived with his family in the Muslim quarter of the village. He worked at a local kiln, transporting freshly baked bricks in a horse cart.

Amrit Lal, the oldest boy, was immediately agreeable. At fifteen, he didn’t need to be told that the family could use the money. Their father, Jagram, was working on a construction site in Lucknow, the state capital, eighty miles away. Their mother, Jagtapa, toiled in a neighbor’s paddy fields. An older sister was still unmarried; a younger sister was only six. The children were enrolled in the local government-run school, where a single classroom housed dozens of students. Everyone was of a different age and level, but they were all made to spend hours reciting the Hindi alphabet by rote. Amrit Lal felt that such an education was a waste of time. It would be better to work and put food on the table.

Akhilesh, who was ten, hung back. He helped his mother weed the slice of farmland that they had managed to keep out of the hands of creditors, but he was too young, he knew, for a real job. He was used to being petted and spoiled. His mother affectionately called him “little brother.”

Perhaps Bhola saw the indecision on Akhilesh’s face, because he quickly sweetened the offer. “I’ll give you a mobile,” he promised.

The boys had envied friends who flaunted their parents’ cell phones. Available for a few hundred rupees from a nearby bazaar, the gadgets were referred to admiringly as “China mobiles” for their country of origin. “I became greedy,” Akhilesh admitted later.

The brothers gathered four friends, who also took Bhola up on his offer. The seven children told no one where they were going and set off as they were. Akhilesh’s pants were ripped; his flimsy cotton sweater was no match for the cold, which in that part of northern India could plummet to seven degrees Celsius. Nakshed, who was thirteen, had just twenty rupees (thirty-seven cents) in his pocket — not even enough for a bus ride back.

On the road, Amrit Lal borrowed Bhola’s phone to call his mother. She scolded him for leaving and demanded that the boys return. But it was too late; Sajid Khan, Bhola’s boss, who had joined them en route, wouldn’t let them. Along the way Sajid had picked up another six boys, and he diverted the children’s attention by treating them to hot samosas, a fried potato snack that some of the boys had previously only heard about.

Sajid employed such tactics throughout the nearly 400-mile journey, which took the group out of India and into Nepal. In the border town of Nepalgunj, he fed the boys dinner at his own house and let them watch cartoons. Early the next morning, he herded them onto a bus headed toward Bhaktapur, a town on the outskirts of Kathmandu, where around sixty kilns produce bricks that are sold across Nepal and even to China for the construction of houses, luxury hotels, and corporate offices. But this number accounts only for the legally registered kilns. Other operations, like the one to which the children were taken — fifteen miles outside Bhaktapur — are buried in dense forests high in the mountains. Here, owners go about their business almost entirely unhindered by the police or labor inspectors who sometimes visit the more accessible kilns.

After two days of travel, the children were put to work stacking bricks. They begged to be taken home or at least allowed to call their parents, but Sajid ignored their pleas. He made them groom and feed the half-dozen horses used to transport the raw bricks to the furnace. Like the horses, the children were beaten with whips. These beatings so terrified them, Akhilesh said, that rather than attempt to escape, the boys “worked as fast as the animals.” […]

Read the full article in the June 2016 issue of Harper’s Magazine.

Sonia Faleiro is an award-winning writer.