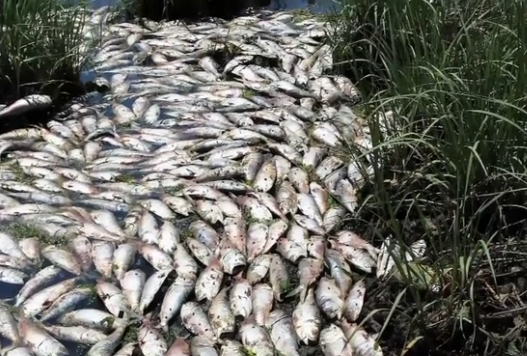 Scientists consider the Indian River Lagoon, which stretches for 156 miles along Florida’s East Coast, one of the most biodiverse waterways in North America. But agricultural runoff and leakage from septic tanks send high levels of nitrogen and phosphorus into the lagoon, causing harmful algal blooms. The blooms block sunlight and starve the water of oxygen, which over the past five years has destroyed more than half the seagrass in the lagoon, killed millions of fish, and suffocated manatees. As Brian Lapointe, scientist at Florida Atlantic University’s Harbor Branch Oceanographic Institute puts it, “It really is like the perfect storm coming together creating a big, big problem in this area.” And with one in five American households using septic tanks, which are unable to adequately filter waste in densely populated areas, waterways from Cape Cod, Massachusetts, to Long Island, New York, are also seeing increased algae blooms.

LISA DESAI: In March of this year, they caused one of the biggest fish kills in the estuary’s history.

LISA DESAI: Those nutrients in the water come from sewage and fertilizers and can spur algal blooms — when algae grows out of control, blocking sunlight, and starving the water of oxygen. The blooms destroyed over half the seagrass in the lagoon during the past five years.

BRIAN LAPOINTE: It killed millions of fish, but also caused die off of a lot of the biological diversity that we have in the lagoon.

LISA DESAI: In May, the St. Lucie River, which is part of the Indian River Lagoon, became so polluted that the Florida Department of Health warned residents not to touch the water. This toxic blue green algae smothered parts of the river, suffocating endangered manatees. Pictures and videos of the contamination are all over social media. In this one a manatee swims through the thick sludge — desperate for relief— as good Samaritans hose it down with fresh water.

LISA DESAI: Scientists say the river is heavily polluted by water released from nearby Lake Okeechobee, which is drained regularly to prevent flooding. The drainage dumps excess algae and agricultural fertilizer runoff into the river. Last month officials curtailed the discharges to help keep the toxic algae under control. However, the water from lake okeechobee isn’t the only culprit.

BRIAN LAPOINTE: We have two major problems, that discharge from the lake bringing a lot of fresh water into the system and then all the septic tanks that are also draining into the system with fecal coliform bacteria. And it really is like the perfect storm coming together creating a big, big problem in this area.

LISA DESAI: In the last 60 years, the number of people living in the five counties around the lagoon has doubled. Many of their homes use septic tanks to treat sewage, and Lapointe says, that’s a big part of the problem.

BRIAN LAPOINTE: The problem is septic tanks really don’t treat the sewage to a very high level, they are not engineered to remove nutrients, and they don’t disinfect. So today we have upwards of 600,000 septic tanks leaching into tidal creeks and canals that flow into the Indian River Lagoon.

LISA DESAI: Lapointe and his team regularly test the water. He says traces of human pollution from septic tanks are everywhere, artificial sweeteners, acetaminophen, the active ingredient in Tylenol, and fecal matter. There are 800 to 1000 dolphins living in the lagoon at any given time. Many are infected with E.Coli and antibiotic resistant bacteria commonly found in human sewage from septic tanks. The once clear, sandy bottom of the water is now full of dead algae.

BRIAN LAPOINTE: You can see the other thing that happens with the build up of septic tanks is the buildup of muck over time as the algae blooms and dies it forms this black muck.

LISA DESAI: According to the Environmental Protection Agency, more than one in five homes in the United States relies on septic tanks to treat their sewage. The tanks work best in rural areas with dense soil and where homes are spread out. The tanks are installed underground and receive waste from bathrooms, kitchens, and laundry machines. Inside the tank, solid waste is separated from liquid waste. The liquid then flows into the ground. If the soil is dense enough it can filter out bacteria and viruses…naturally cleaning the wastewater….before it reaches a drinking supply or body of water.

BRIAN LAPOINTE: One septic by itself isn’t a problem, but when you have high densities of septic tanks, thousands or in some cases tens of thousands in poor soil conditions close to a sensitive water body like the Indian River Lagoon then you’ve got a big problem.

LISA DESAI: Last year on the EAST End of Long Island, algal blooms spurred out of control, killing hundred of thousands of fish in the Peconic River Estuary. Scientists said that the 360-thousand septic tanks near the water contributed to the problem. Lapointe believes there should be stronger government oversight over where septic tanks are built

BRIAN LAPOINTE: People, they get their permits legally permitted by the state agencies and the health departments. They think it’s working just fine. It’s like this magic box underground

LISA DESAI: Three years ago Bethany and Sean Quinn moved into their home just across the street from the St. Lucie River. It’s the same house Bethany grew up in. They now think part of what’s hurting the waterway is the septic tank buried in the front yard. Theirs is one 30 thousand septic tanks in Florida’s Martin County suspected of seeping into the water.

SEAN QUINN: If I had my preference I’d much rather have it be something that goes and is treated and the water’s reclaimed and you know turned into something useful.

LISA DESAI: The Quinn’s say the water isn’t as healthy as it used to be. They don’t swim in it anymore and they won’t let their two daughters go near it.

SEAN QUINN: Now people aren’t catching as much fish, you don’t see any of the seagrass, you rarely see shells. I mean it’s just, you know, it’s changing right before our eyes in our generation that we’ve seen.

LISA DESAI: One county trying to do something about it is Martin County. Commissioner Doug Smith is spearheading a 138 million dollar project to clean up the river. The plan — over the next 20 years — is to connect over 10 thousand houses that rely on septic tanks to sewage lines.

LISA DESAI: “So this is ground water?”

LISA DESAI: On the side of a road a quarter mile from the river, Smith says this puddle of groundwater is a sign of why septic tanks don’t belong in these kind of neighborhoods.

DOUG SMITH: The groundwater is right there and you’re only 2-3 feet below the surface of where we are standing. And so all of these homes have both their septic systems and their drainfields sitting right on top of that.

LISA DESAI: “Why were developers allowed to build so many septic tanks close to the shoreline?”

DOUG SMITH: So the development community for a long time it was a lot about how can we get the most units built as quickly as possible. Time has moved on.There’s a lot more awareness, there’s a lot more consciousness now as to how we deal with life. It’s not, it’s not proper to have a septic system on the edge of a water body, anywhere in the United States.

LISA DESAI: With a goal of having homeowners convert from septic tanks to sewer systems over the next 20 years…many Martin County residents will be mandated to replace their septic tanks…and pay around 8 thousand 5 hundred dollars per household to connect to sewage lines. People who can’t pay up front will be allowed to pay in installments over 20 years, added onto their property taxes.

LISA DESAI: And just last month Florida Governor Rick Scott called septic tank run off a quote “… major contributor to the pollution in these water bodies…” He also said he would propose new funding for a 50/50 matching grant “… to encourage residents to move from septic tanks to sewer systems in order to curb pollution…” and “… to meet the increased demand for wastewater services.”

DOUG SMITH: People want to have good, healthy water. They want it to be clean water, and it really should be. Generations ago it was and so everybody’s hope is that we can get back to that.

LISA DESAI: Suzie Debartolo is one homeowner who was eligible to connect to sewer lines. She signed up right away and paid thousands of dollars to get rid of her septic tank.

SUZIE DEBARTOLO: I was so excited to do it I started saving in advance for this, and it was just like night and day I’ve never had another worry or concern since and everything works perfectly.

LISA DESAI: Debartolo moved to Martin County 40 years ago to this house overlooking the St. Lucie River. But she has sold her boat, and her kayaks stored away.

SUZIE DEBARTOLO: OK, Lisa, you see how that is just totally dead, you don’t see any sign of life down there. I wouldn’t dare get in here.

LISA DESAI: Debartolo says she misses the flourishing lagoon and life in her neighborhood isn’t the same.

SUZIE DEBARTOLO: Well it’s just a very sad reality. Life changes and people are, they’re afraid to get out there on it and I’m hopeful that something can be done to improve it where we could get back out on the water.

This story was reported in partnership with The Investigative Fund at The Nation Institute, now known as Type Investigations, the Florida Center for Investigative Reporting, and the Economic Hardship Reporting Project.

Yasmeen Qureshi is a broadcast reporter, producer and shooter based in New York City.