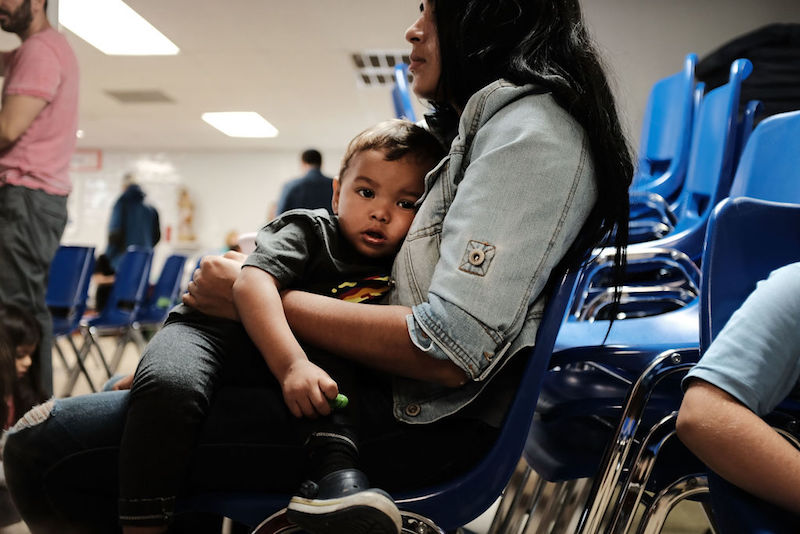 Spencer Platt/Getty Images
A woman who identified herself as Jennifer sits with her son Jaydan at the Catholic Charities Humanitarian Respite Center after recently crossing the U.S., Mexico border on June 21, 2018 in McAllen, Texas.

Longtime Rio Grande Valley immigration lawyer Carlos Garcia now ends many of his days at the office by driving to the Port Isabel detention center. He’s there to offer pro bono advice to parents desperate to reunite with children who were taken from them at the US-Mexico border.

Thursday night he had good news after meeting with a mother from Honduras who was fleeing gang violence and requested asylum when she was arrested on June 17 and separated from her 6-year-old son. “She talked to him by phone for the first time,” Garcia recalled. The boy had been asleep when he was taken, and he believed his mother had abandoned him. “She told him, ‘I would never abandon you and I will do everything possible to see you very soon.”’

But even if Garcia’s client is reunited with her son, that reunion may prove short-lived. Like other migrant parents, she could face a harrowing decision of whether to be deported with him to the danger they sought to escape, or separate again so he can pursue his own asylum case.

Under the Trump administration’s Zero Tolerance policy, Garcia’s client was charged with illegally crossing the border and separated from her child. After an executive order halted the separations on June 20, a federal judge ordered the government to reunite the families within 30 days. As this process plays out, she and thousands of other parents have applied for asylum. But Attorney General Jeff Sessions recently narrowed eligibility for survivors of gang and domestic violence, and many will likely be ordered deported. When that happens, they must decide whether to bring their children back to the danger they faced in their home countries, or leave them behind to navigate a legal labyrinth to a safer life in the United States.

Under past administrations, asylum-seeking families detained at the border generally had one consolidated case as they made their way through immigration court. But when children started being separated from their parents in May, each member of the family became a separate case that proceeded on a different track and timeline.

Parents who are convicted in federal criminal court of crossing the border are being processed as “criminal aliens,” then detained by Immigration and Customs Enforcement. Most will be deported unless an asylum officer determines they have a “credible fear” of persecution under the newly narrowed guidelines. With terrified parents focused on reuniting with their children, many interviews are going poorly.

“The majority of parents I talk to are so distraught that they are getting negative reviews,” Garcia explained. “There are a lot of good asylum cases that won’t have the opportunity to be heard,” so the only way for many of these parents to be reunified with their children may be “on the way out.”

“There are public health officials coming to talk to them, asking if they want to be reunified with their child even if they are ordered removed,” Garcia said. He added that most of the nearly 100 parents he has access to at Port Isabel “are asking for their child to be sent home with them.”

Meanwhile, separated children who remain in the United States become “unaccompanied minors” — the same term used for those who crossed the border without a guardian — and are held in the custody of the Office of Refugee Resettlement (ORR) until they are settled with a sponsor. As unaccompanied children under the age of 18, they have the right to file their own asylum claim with the Department of Homeland Security’s U.S. Citizenship and Immigration Services. This is an additional step where asylum officers review their application in what advocates consider a non-adversarial setting. But some lawyers describe the prospects for separated children to win asylum as a legal nightmare.

“They took away the child’s only witness and moved them thousands of miles away. It is impossible to represent them,” said Bridget Cambria, an attorney with the Pennsylvania-based nonprofit Aldea, which assists detained families with asylum claims. In one of her more recent cases, a father separated from his three-year-old child and facing removal was moved to five different facilities, none of them close to his child. 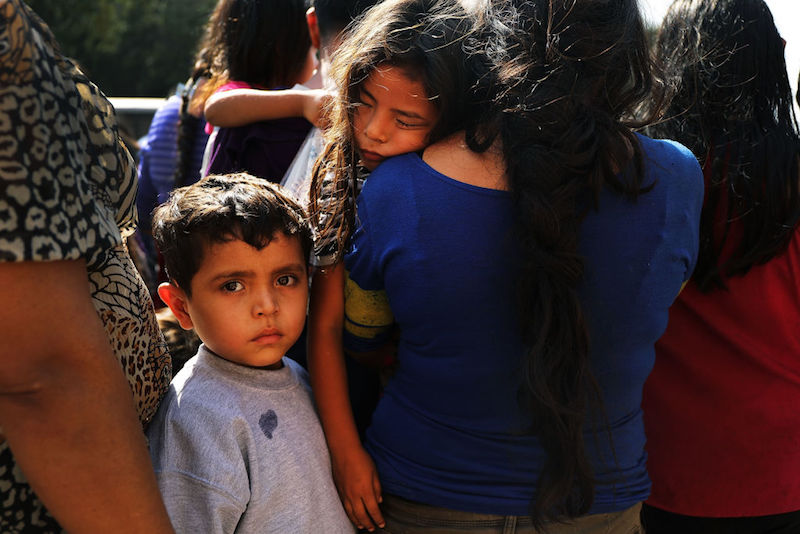 Dozens of women, men and their children — many fleeing poverty and violence in Honduras, Guatamala and El Salvador — arrive at a bus station following release from Customs and Border Protection on June 23, 2018 in McAllen, Texas.

A statement released Friday by the Department of Health and Human Services said that the agency would “[e]nsure parents and children are in communication with each other as often as feasible” and was “continuing to work overtime to connect minors with verified parents.”

If an ORR officer negatively reviews a child’s asylum request, it is referred to the Executive Office of Immigration Review (EOIR), which handles all immigration cases, where a judge will review it in what advocates consider an adversarial hearing. Families and single adults only get the court option, which usually requires extensive legal preparation in order to succeed. Just 20 percent of overall asylum applicants were approved in fiscal year 2017.

Manoj Govindaiah, director of family detention services at RAICES, the largest non-profit legal aid provider for immigrants and refugees in Texas, says it is unlikely anyone would argue an asylum claim was filed by an unaccompanied minor if requested while in ORR custody. But, he cautions, “It gets tricky if a child is reunited with their parent, and it becomes the asylum officer’s duty to evaluate whether the application was filed by an unaccompanied minor.”

Thus, a child who is reunited with their parent and continues to pursue asylum via USCIS may also be simultaneously placed in separate deportation proceedings in immigration court. “There is no clear answer or policy in that scenario,” said Govindaiah. “The whole thing is just messy, and it becomes very complicated for the child and even the prosecutor to figure out exactly what is going on.”

Many families will find a parent has been given a court date for their separate pending asylum claim that is on a different date than the one assigned to their child. This means if the family’s asylum claim is denied, they may not be able to wait for their child’s court date.

“If they are reunified in detention and the child has been given a separate Notice to Appear in court, we’ll have to see how they handle that procedurally,” said Wendy Young, president of Kids In Need of Defense (KIND), one of the largest legal services providers for migrant children in the United States.

Trump has already expressed frustration with the backlogged immigration courts, tweeting last month and again last Thursday that the U.S. should not be “forced to endure a long and costly trial” for immigrants. Legal advocacy groups such as KIND are concerned separated children whose cases are rejected by USCIS and sent to immigration court will suffer from a lack of due process because of the Trump administration’s systematic assault on legal protections for unaccompanied minors.

In December, the Department of Justice rescinded a 2007 EOIR memo recognizing the need for specialized children’s dockets, and replaced it with a new memo informing judges that immigration law does not require them to consider “the best interest of the child” as a legal standard for determining whether they are eligible for asylum and protected from deportation.

The new guidance also directed judges to “be vigilant in adjudicating cases” of “purported” unaccompanied minors who it said may “misrepresent” their age in order to qualify “for the benefits” they would be eligible for in court.

These developments prompted UNICEF USA CEO and President Caryl Stern and American Academy of Pediatrics President Dr. Colleen Kraft to visit a special juvenile docket last month. Stern said she wanted to “examine the process” of how unaccompanied minors appear in immigration court. One of the cases they observed concerned a 16-year-old boy who requested voluntary departure. The government’s lawyer did not object, but when Judge Charlotte Brown asked if the boy if he still had a fear of danger in his home country of Guatemala, and he confirmed he did, she refused his request.

Judge Brown acknowledged that children often “want to advance” their deportation instead of pursuing asylum “because they miss their parents.” But she insisted she “won’t send unaccompanied minors into situations where they may be harmed” and would instead reset their court dates in order to give them time to find legal help with seeking asylum. Decisions like this come as pending immigration cases for unaccompanied minors have already skyrocketed, reaching 76,634 by the end of March.

Last Friday, an HHS press release said the agency was “expediting the reunification of minors with their parents under the timeline and conditions of a recent court ruling.” But for those who will remain in the United States after their parents are denied asylum and sent home, the next part of their case that the government will likely expedite is their deportations.