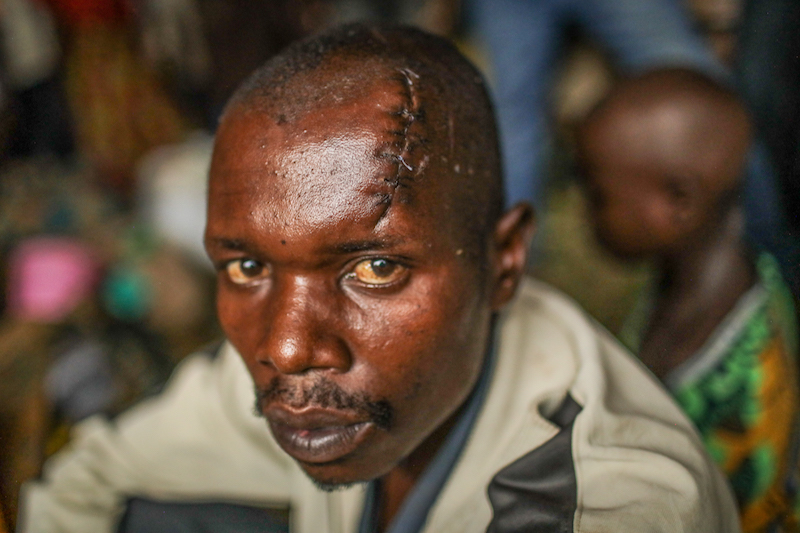 Editor’s note: This sidebar is part of our main investigation, “A Slaughter in Silence,” reported by Nick Turse in partnership with VICE News. Read Turse’s reporting journey as he watched an ethnic cleansing campaign unfold in real-time.

Sometimes, the best thing a reporter can do is simply get out of the way and let people tell their own stories in their own words. While no seven individuals can stand in for the more than 300 people I interviewed for this project, these particular voices offer a representative portrait of the violence and hardships faced by, and the incredible resilience of, so many of their fellow survivors. 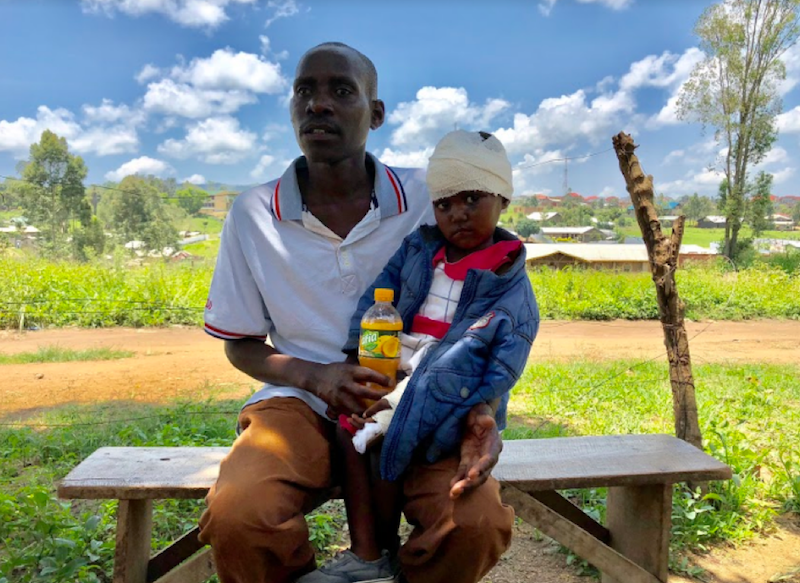 “I wasn’t at home when the attack started. Like most men, I was in the center of the village hanging out. So I didn’t go back home. I just fled to another village, called Nya. My wife and my child [Rose Mpenzie] were at home. My wife was killed. She was nine months pregnant. The Red Cross came to look for survivors. They found Rose. My wife had fallen on her, shielded her. I wasn’t there, but that is what they told me. I came back the next day and found out my wife had been killed. I couldn’t handle it. I was screaming. I was crying. It was so painful to me. They told me my child was taken to the hospital in DroDro… when I found her she was bandaged. She was cut three times, her arm and twice on the head — including her face. Her arm was broken. It’s not healed yet, but it’s getting better. She doesn’t talk anymore. Not like she used to. Sometimes all she does is cry. The only thing she says is, ‘Where’s mama?’” 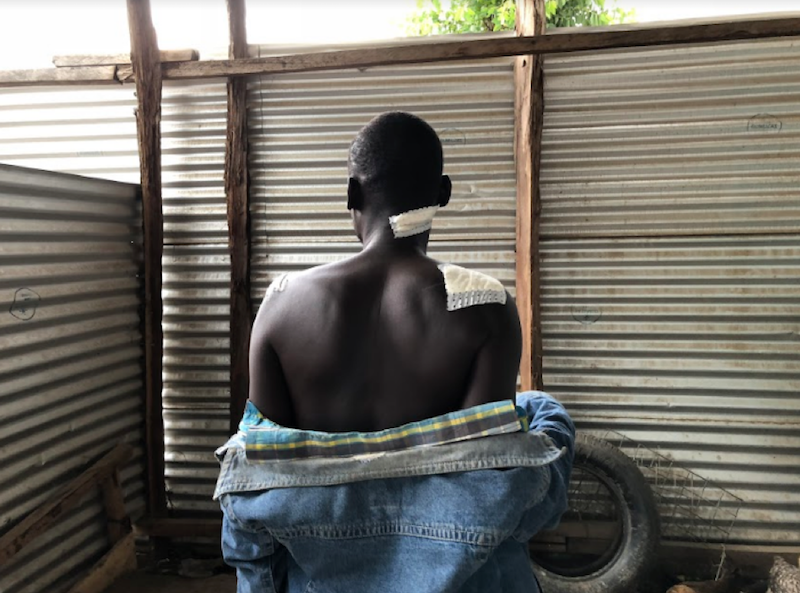 “On the day when the Lendus attacked, there was no place to run. I took refuge along the lake, hiding among some large stones. I stayed there all night. I watched as they were killing people and throwing them into the lake. They didn’t see me the whole night. But the next day, a group of them were searching. It was my bad luck that they saw me. One of them pointed at me with an arrow. They said don’t move and told me to drop the machete I was carrying. I did. I was dead already. I just didn’t want to be killed by arrows. That’s all I wanted. I was so scared to be shot with arrows. They told me to take off my trousers, and I did. They took my belt and tied my hands behind my back. My belt had a button that locks. When they tied my hands, they didn’t press that button. I realized that I was actually free, so I punched one of them who was in front of me and started to run. They cut me. One of them cut me here [points to the back of his head], one of them cut me here [points to his left shoulder], one of them cut me here [points to his right shoulder]. I was bleeding, but I kept running. That’s how I escaped.” 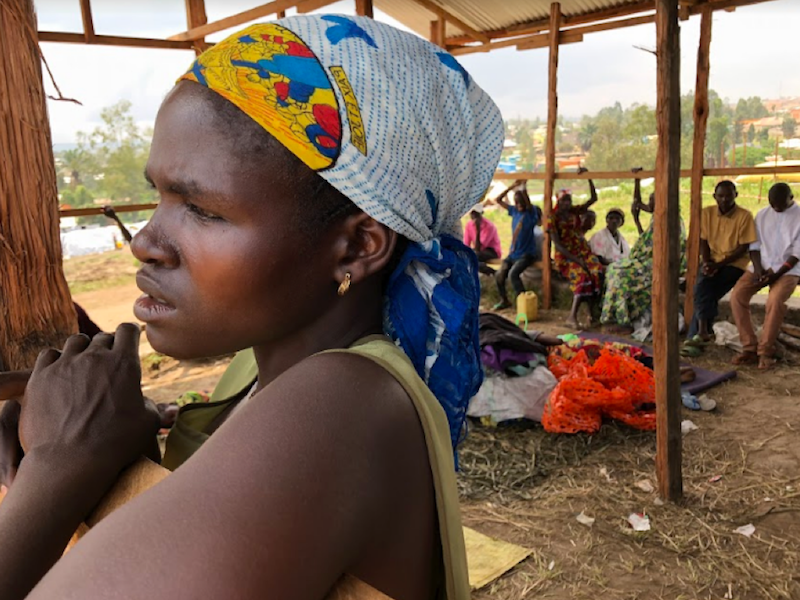 I arrived here [at the camp for internally displaced persons, or IDPs] three weeks and four days ago. I’ve never received anything. I’ve registered five times… They always say, ‘Don’t worry. You’ll get food.’ But we don’t. We get food from the other IDPs, people who feel sorry for my children. I need a plastic sheet [to fashion into a shelter] and food. We can’t live this way.”

“I knew them. They were my neighbors — Richa, Lekda, Tcheddya, Manoli. They lived in the neighboring village separated from ours by a small stream. They told me, ‘Give us money!’ I said I didn’t have any. Then they attacked. After I was cut, I lost consciousness. When I woke up, I found the dead body of my son next to me.” 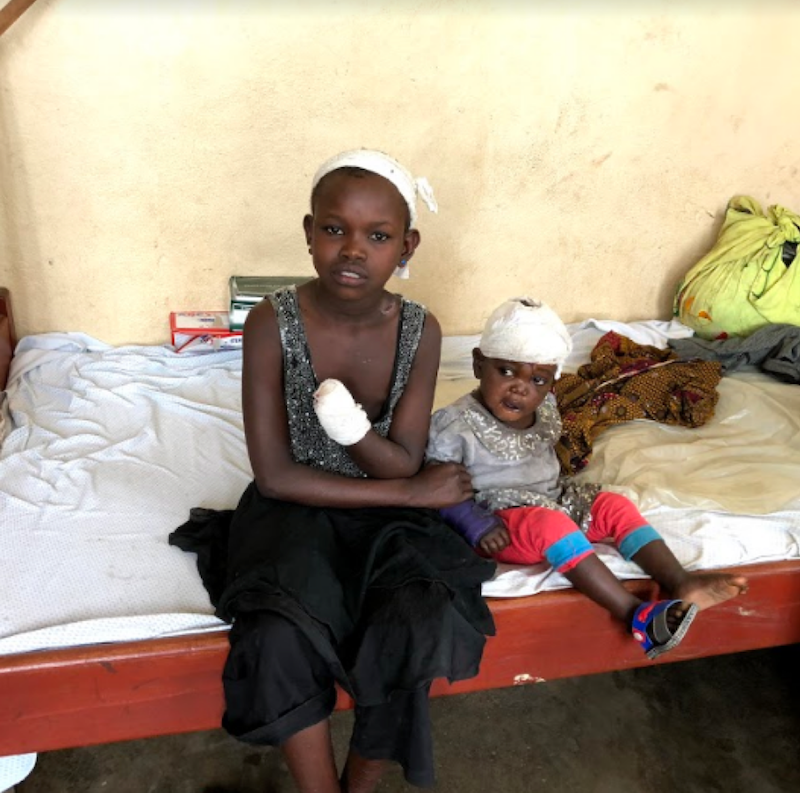 “After they cut off my hand, I passed out. When I got up, I walked over and found my mother. She was dead. But my little sister [Rochelle N’gabusi] was alive, so I took the fabric from my mother’s body and I strapped her to my back. I found another boy from my village, his leg had been badly wounded by a machete. I took his hand and helped him. We saw another boy. They cut off his legs but he was still alive. I couldn’t do anything for him. I found my dad [Nyine Richard]. He told me he was very thirsty and to get help. There were men from the village who came back to look for survivors. I brought them to my dad.” 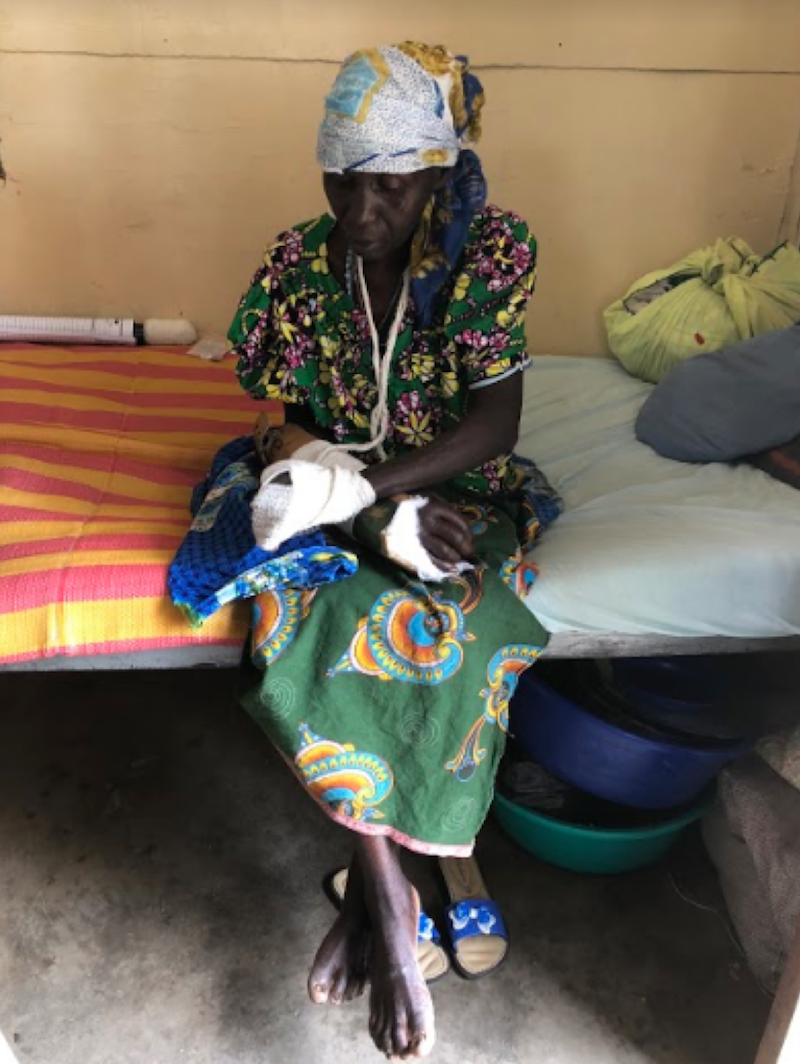 “I said, ‘Why are you cutting me? Forgive me! Have mercy!’ But they cut my arm. It’s broken. They cut off my finger. And they cut me here, twice [gesturing to her head with her bandaged left hand].” 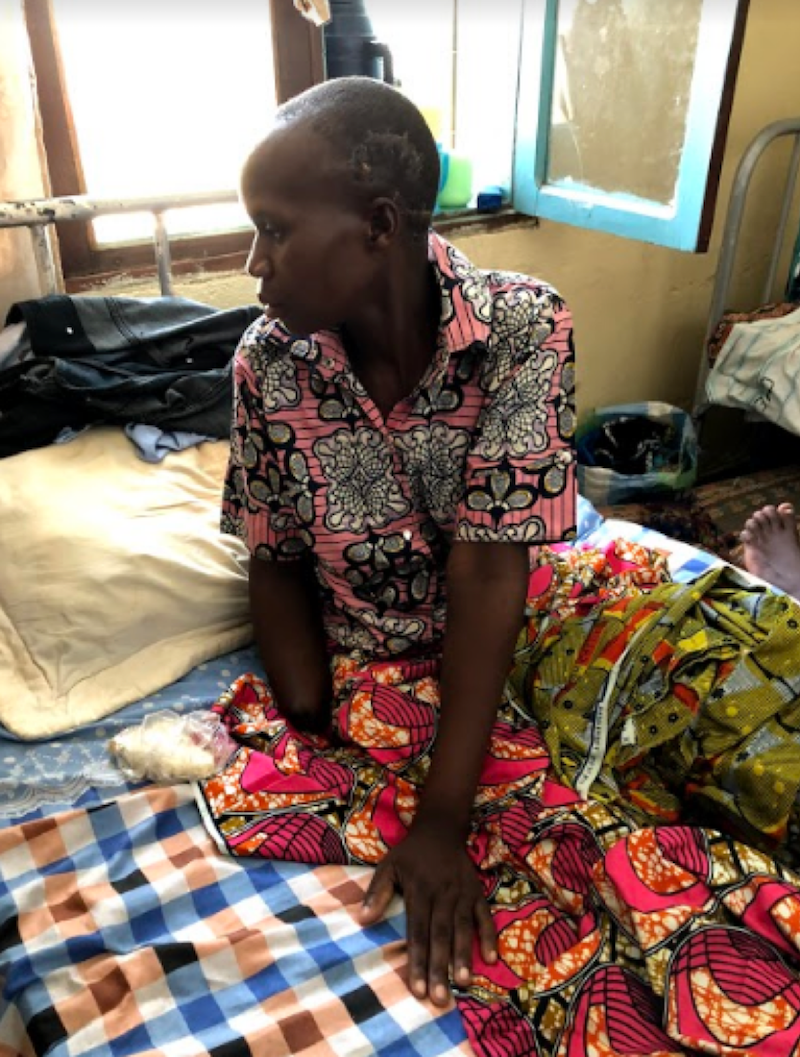 “We tried to run. We ran to the north. But there were attackers. We ran to the south, to the east, to the west. They were everywhere. We were surrounded. I was running when something slammed into the side of my head. I was knocked unconscious. I woke up in the hospital in DroDro.” 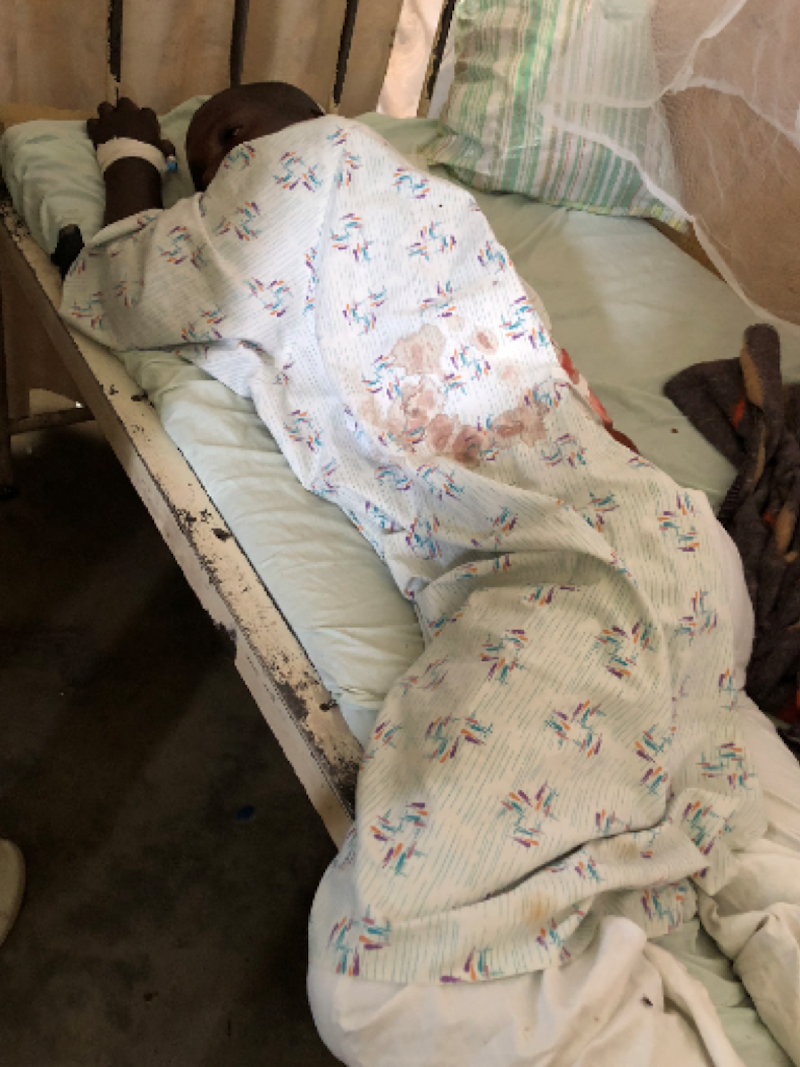 “We were under attack before I even knew what was happening. I was shot with an arrow in the left wrist. I pulled it out. A few of us ran to one of the wooden fishing boats. We were pushing it into the water, when one of the Lendus came up behind me and cut my back with a machete. The men with me were killed on the shore. I was badly injured – bleeding – but I dove into the lake and started swimming.”