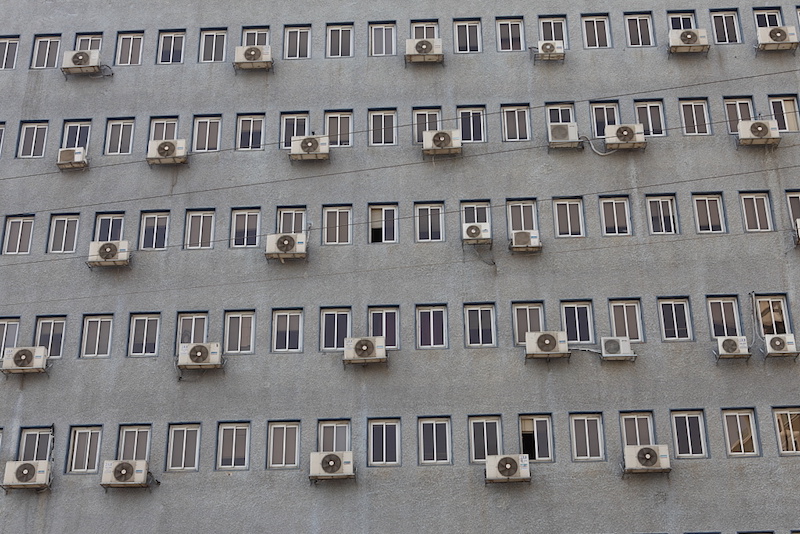 Chemicals used in air-conditioners contribute to climate change. The United States has not ratified a treaty that would ban the chemicals. Image: Ze'ev Barkan/Flickr Creative Commons

The report released recently by the Intergovernmental Panel on Climate Change laid out the drastic reductions in coal, oil and gas consumption necessary to avoid catastrophic warming of the planet. But to stave off the most disastrous damage, we need to swear off another product, too: hydrofluorocarbons, better known as HFCs. And banishing them shouldn’t be so hard, relatively speaking.

In a bitter irony, these chemicals, used to cool, have also been driving global temperatures up. Used in refrigerators and air-conditioners since the 1980s, HFCs are extremely potent contributors to the earth’s warming. One HFC, 134a, used in most American refrigerators traps 1,300 times more heat than carbon dioxide does. Another, 410a, used in most American air-conditioners, is worse. Around the world, as more people rely on air-conditioning to cope with severe heat, the HFCs that routinely leak out of appliances and into the atmosphere have become the fastest-growing type of greenhouse gas emitted in every country on earth.

There is a seemingly simple solution to this feedback loop: Stop making and using HFCs. But so far, we’ve been unable to do it — not for scientific reasons, but for political ones. Just as we do with fossil fuels, we already have alternatives to HFCs that don’t contribute to warming. For cooling, a range of substances including ammonia, propane and iso-butane can do the trick.

Yet, instead of moving forward, our country has been reversing the steps it has already taken toward solving the HFC problem. This year, the Environmental Protection Agency announced it would not be enforcing a 2015 rule that prohibited the use of HFCs. The E.P.A. has also proposed weakening an Obama-era effort to limit HFC leaks from appliances.

An appeals court ruling written by none other than Brett Kavanaugh has further hampered the fight against these climate-polluting refrigerants. In 2017, Judge Kavanaugh ruled that the E.P.A.’s 2015 HFC rule exceeded the agency’s authority. Last week, on his first day as a justice, the Supreme Court decided it would not revisit that decision. (The E.P.A. has said that it is working on a new rule.)

An international agreement known as the Kigali Amendment will begin phasing out HFCs in 2019. Though the United States, the biggest emitter of the chemicals, has yet to ratify the treaty, 53 parties, including Australia, Britain, Canada, France, Germany, Mexico and the Maldives, an archipelago nation on the front lines of climate change, have already done so. With American participation, the agreement is expected to prevent half a degree Celsius of global warming by the end of the century.

While Justice Kavanaugh, who has a history of striking down environmental regulations, may be on the highest court for life, Congress and the president who put him there have shorter terms. Resistance to ratifying Kigali has been led by a group that sees concern about the climate as “alarmism.” But after the midterms, their opposition may matter less.

Already, there is plenty of support for the Kigali Amendment not just from environmental groups, but, critically, also from many Republicans and from the HFC manufacturers themselves. (Their interest seems to stem from having replacement refrigerants that would benefit from the phasing out of HFCs, but that is another story.) Unlike coal companies, the HFC industry actually wants the United States to phase out its product.

Chemours, which spun off from DuPont in 2015 and inherited its chemical refrigerant business, has lobbied Congress to support the treaty and, along with Honeywell, another manufacturer of refrigerant chemicals, filed the appeal of the Kavanaugh ruling that the Supreme Court just decided not to hear. The Alliance for Responsible Atmospheric Policy, a coalition of manufacturers that make and use HFCs, wrote to President Trump in June to urge him to submit the Kigali Amendment to the Senate for ratification. Unwilling to wait for federal action, New York, California, Connecticut and Maryland have made their own plans for limiting the chemicals.

There’s another reason to be optimistic that we will break from the environmentally catastrophic refrigerants: We’ve done it before. HFCs are actually themselves a replacement for CFCs, which were phased out by the Montreal Protocol, the 1987 treaty that was amended in Kigali in 2016 to also eliminate HFCs. First used as refrigerants in the 1930s, CFCs were on the market for more than four decades before scientists discovered they were eating away at the ozone in our atmosphere — a process that, had it been allowed to continue unchecked, would have eventually exposed us to lethal amounts of the sun’s radiation.

The threat from HFCs is no less existential — or urgent. As the climate report makes clear, avoiding climate catastrophe will require almost superhuman efforts to overcome the wall of opposition to regulation erected by the fossil fuel industry. In comparison, breaking from HFCs should be comparatively easy.

Sharon Lerner (@fastlerner) is an environmental reporter for The Intercept. This article was reported in partnership with the nonprofit Investigative Fund, now known as Type Investigations.