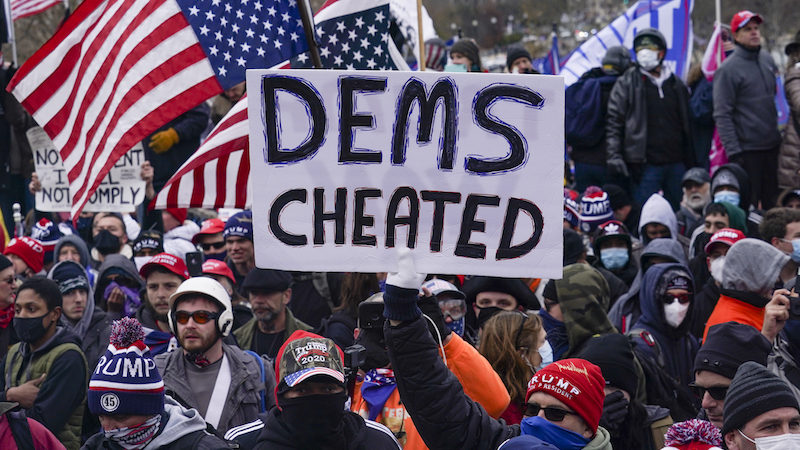 Donald Trump’s efforts to delegitimize the results of the 2020 presidential election set off a gold rush, allowing prominent lawyers, conservative PACs, Republican lawmakers, and others in the former president’s orbit to raise millions of dollars off false claims of a stolen election.

Among the most successful fundraisers is Matthew Braynard, the former director of data and strategy for Trump’s 2016 campaign. Braynard had launched his fundraising page on the Christian crowdfunding platform GiveSendGo on November 7, promising to use the money to “detect potentially fraudulent ballots.” After a week, donations had surpassed the goal of $590,000 that he had set by tens of thousands of dollars, and by mid-January, the campaign had raised more than $675,000 from nearly 9,000 donations.

Braynard used the funds, he said, to acquire voter data from swing states, analyze records for suspicious voter registrations, and call individuals to confirm whether they had actually cast a ballot. He was assisted in this effort by members of the Trump administration, the Washington Post reported, and he participated in several post-election lawsuits. Braynard received at least $150,000 as an expert witness in those cases.

What’s notable about Braynard’s campaign is less the nuances of his particular effort (there’s now an entire cottage industry around claims of election fraud) than how it demonstrates the power of political crowdfunding outside traditional institutional structures like nonprofits and political action committees.

Braynard had initially launched his campaign on GoFundMe, which bills itself as the world’s largest fundraising platform. But his campaign was shut down for violating the site’s terms of service and attempting to “spread misleading information about the election,” the company told Politico. By contrast, GiveSendGo has been more permissive about the kinds of fundraisers it allows. “The democratic process is upheld by people looking into it,” GiveSendGo co-founder Jacob Wells told GEN and Type Investigations.

As such, it has become a go-to fundraising vehicle for some Trump supporters and far-right groups looking to solicit money online.

GiveSendGo, which was founded in 2014, is the brainchild of Wells and two of his siblings, Emmalie and Heather, according to its website. The site’s terms and conditions note that campaign owners “are not permitted to create a Campaign to raise funds for illegal activities, to cause harm to people or property, or to scam others.”

“The reason we went with them is because I thought they were the ones least likely to kick us off,” Braynard told GEN and Type Investigations. “I was reasonably confident that GiveSendGo would let us operate.”

So far, there is no evidence that the results of the 2020 election were fraudulent, despite the claims of Trump and his supporters. Braynard, however, says he has evidence that “never saw the light of day in a courtroom” — and which he’s yet to make public himself.

All told, individuals and groups alleging widespread election fraud have raised more than $1.2 million on GiveSendGo, according to an analysis of donations by GEN and Type Investigations. Our analysis identified at least 20 crowdfunding campaigns on the site challenging the November election results, alleging voter fraud, and raising funds for individuals who claim to be election integrity whistleblowers. A couple of those campaigns have raised relatively small amounts of cash — less than $1,000 each. But at least 12 of them have raised more than $5,000 each, from more than 18,000 separate donations, and two have raised hundreds of thousands of dollars. All but two campaigns are still live on the site, although contributions have slowed since President Joe Biden’s inauguration.

The fact that money continues to trickle into election fraud fundraisers on GiveSendGo highlights the extent to which some Trump supporters continue to feel betrayed and angry about the results of the election.

A February poll from Quinnipiac University showed that 76% of self-identified Republicans believed there was widespread voter fraud in 2020.

Like Braynard’s campaign, many of the GiveSendGo fundraisers identified in our analysis were launched by individuals and groups saying they needed money for data analysis and various types of “investigations” and “research.” With a little support, the fundraisers promised, they could upgrade their computers, purchase datasets, crunch numbers, and collect security footage from election night.

“Our goal is expose the deep state that absolutely does exist and it’s [sic] illegal surveillance of millions of innocent Americans without probable cause as well as their tampering with and changing election results to fit their political desires for America, which is socialism,” read one fundraiser that raised at least $68,900 from 208 donations, with some coming in as recently as mid-February.

Others sought to make up for livelihoods they said were undermined by backlash against their claims of election fraud.

Richard Hopkins, a postal worker, claimed to have overheard his supervisor discuss “backdating” late mail-in ballots so they would appear to have been cast before the election deadline. A GiveSendGo post-election campaign in his name launched as an appeal for personal funds, after, it says, his supervisors placed him on unpaid leave.

Yet there is no evidence that any such backdating took place, and Hopkins recanted his allegations during an interview with U.S. Postal Service investigators after his claims gained media attention. (After that interview, Hopkins appeared in at least two videos produced by Project Veritas, a right-wing activist group that supported his claims, in which he denied recanting and said he was coerced by the investigators.)

The Hopkins fundraiser, which has raised more than $230,000, is still online. Hopkins did not respond to messages sent to him through the GiveSendGo fundraising page.

Election experts say grassroots efforts to root out voting irregularities are unlikely to succeed. David Becker, executive director of the Center for Election Innovation and Research, who helped create the nation’s largest interstate matching platform to detect out-of-date voter registrations, is highly skeptical that any private citizen could use the limited personal information available in publicly or commercially available datasets to accurately match voter registrations with death and change-of-address records.

“I’ll be honest, I think of most of the people who are contributing to these efforts as victims. And I feel for them, because I think they’re being preyed upon,” Becker said.

Braynard, for his part, said he used government sources and was supported by peer-reviewed research. “Our researchers are using additional resources to validate a sample of this data using property records, limited access to drivers license databases, court records, and social media accounts,” he said.

GiveSendGo co-founder Wells downplayed worries that contributors to fundraisers are at risk of being scammed. “These aren’t campaigns that are breaking people,” he said. “These are things that people feel like they want to have a voice in and are willing to give a little bit of money toward. They’re not giving their life savings.”

Still, GiveSendGo is considering creating a pop-up notification on “potentially controversial” fundraisers, Wells said, to remind donors that the project may not achieve its desired results and they are donating at their own risk.

For Braynard, the online fundraiser was just the beginning of a larger campaign. He said he personally received no money from the GiveSendGo fundraiser, and in January, he announced that he would use surplus funds to help launch a new organization, Look Ahead America, that hopes to register rural and working-class voters who are sympathetic to Trump’s policy agenda.

And despite what the courts have said, Braynard still hasn’t given up on his efforts to prove the existence of election fraud in 2020. He said he is planning to publish new reports that will “show that there are enough ballots that were cast illegally to pass the margin of victory, making the deserving winner of the election uncertain.”

It is an historic undertaking — one that highlights how Trump’s attacks on American democracy will continue to influence conservative politics — made possible through GiveSendGo.

“We’re the only organization that has ever attempted this,” Braynard said. “We are planning to push our case in a courtroom soon.”

This story was produced in partnership with Type Investigations with support from the Puffin Foundation. Research assistance by Nina Zweig.