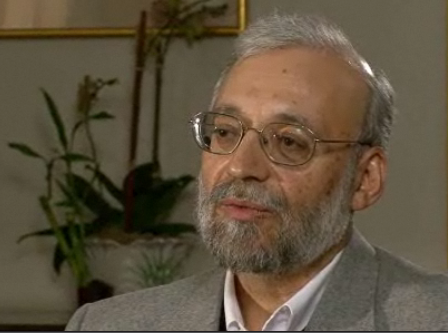 In an interview with NBC’s Ann Curry this week, a top Iranian human rights official cast doubt on the charge that Josh Fattal and Shane Bauer, the two Americans detained in Iran, are spies — which officials there have repeatedly alleged.

Mohammad-Javad Larijani, secretary-general of the High Council for Human Rights and a close adviser to Ayatollah Ali Khamenei, took credit for the release of the third American, Sarah Shourd, in September, saying, “We have been able to convince the legal structure that that lady was definitely out of this process. She was not even capable of doing such a thing [spying], so we prepared the ground of her release…This took a lot of labor because we should convince them that there doesn’t seem to be any sign that she was even capable to do that.”

When Curry pressed him on what evidence the state had against Fattal and Bauer, an Investigative Fund reporter, he demurred, saying only, “the intelligence or the prosecutor say that they have evidence…For them it is strong enough to detain them.”

But he then went on to indicate that the High Council on Human Rights would try to assist in their release:

“I hope that we can facilitate, we can facilitate this process, with this perception: that let us assume that these people were innocent, they were really hikers, and they were accidentally but by chance crossed into the most volatile area on the border.”

This is the first time we’ve heard an Iranian official suggesting that Shourd, Fattal, and Bauer may be innocent of the spying charges since the three were detained more than 15 months ago.