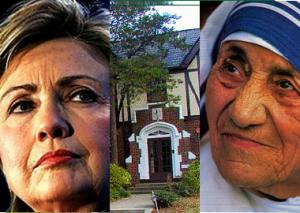 Hillary Clinton, the D.C. house, since sold, that was intended for an orphanage, and Mother Teresa.

On February 4, Secretary of State Hillary Clinton was the surprise keynote speaker for the 58th annual National Prayer Breakfast. The Breakfast is the one public event organized by the secretive Washington network, the Family, a group of elite fundamentalists who minister to DC's powerful and wealthy who are seen as the divinely “elect,” chosen for leadership by God. With the Family in the news this past year due to the string of sex scandals at its “C Street” house for members of Congress — and later for the role it seems to have played in shaping the draconian anti-gay law introduced in Uganda last year — the speech by Clinton, sandwiched between Family head Doug Coe's introduction and the traditional presidential address by Barack Obama, was an interesting coda to her strange status as a longtime “friend” of the Family.

Although much of the media coverage focused on Clinton's and then President Obama's condemnations of the anti-gay bill (leading religion scholar Mark Silk to suggest that Clinton's role was damage control as the Family struggles to make the Uganda bill “go away”) Clinton's speech also underscored the Family's influence in pushing her stance on reproductive freedomrightward.

In her address, Clinton sentimentally recalled meeting Mother Teresa at the 1994 National Prayer Breakfast. Mother Teresa had used her platform as guest speaker to chastise the Clintons (standing right beside her, smiles stretched to the breaking point) for their nominal support of abortion rights. “Any country that accepts abortion is not teaching its people to love, but to use any violence to get what they want,” Mother Teresa said, and went on to suggest adoption be promoted as an alternative to abortion. “Please don't kill the child. I want the child. Please give me the child.”

Mother Teresa's pro-life fans swooned, with many giving the nun a standing ovation. The Clintons remained seated, yet both — particularly the ever-politic Hillary — understood how behind-the-scenes power politics work within the Christian Right, and responded to the rebuke by finding “common ground” with the nun. Although Clinton didn't mention this in her public reminiscence last week, after C-Span stopped taping and the breakfast plates were cleared, Fellowship head Doug Coe gently brokered a peace between Hillary and Mother Teresa.

Coe left the Breakfast with one of the most powerful women in America in his debt for political services rendered. And Mother Teresa had the satisfaction of watching Hillary's support for abortion as a fundamental right give way to an acceptance of it as a “tragedy” — one that should be made as “rare” as possible. In the long run, Hillary turned a public scolding into a highly visible friendship with a figure whose widely accepted moral bona fides came with an explicitly anti-abortion imprimatur from the Christian Right.

Clearing the Way for a Rejection of Reproductive Rights

In Clinton's reflections at the breakfast last week — a reprise of her description of the event in her autobiography Living History — she painted a softer picture of the tense moment:

In February of 1994, the speaker here was Mother Teresa. She gave, as everyone who remembers that occasion will certainly recall, a strong address against abortion. And then she asked to see me. And I thought, “Oh, dear.” (Laughter.) And after the breakfast, we went behind that curtain and we sat on folding chairs, and I remember being struck by how small she was and how powerful her hands were, despite her size, and that she was wearing sandals in February in Washington. (Laughter.)

We began to talk, and she told me that she knew that we had a shared conviction about adoption being vastly better as a choice for unplanned or unwanted babies. And she asked me — or more properly, she directed me — to work with her to create a home for such babies here in Washington. I know that we often picture, as we're growing up, God as a man with a white beard. But that day, I felt like I had been ordered, and that the message was coming not just through this diminutive woman but from someplace far beyond.

After the breakfast, Emily Belz, a reporter for the evangelical magazine World, grew curious about what ever happened to the “home for babies” and the adoption plans Clinton described. Belz found that it had closed years ago, and that the nuns who'd staffed it wouldn't talk to the press.

According to a pastor at the church next door to the home's former location, the adoption ministry failed to take off because the Roman Catholic nuns who ran it weren't allowed to care for babies without medical personnel on site. “I'm not sure the legal thing that came down upon them, but they realized they needed to expend their energies in another way,” said Maureen Freshour, who along with her husband, David, pastors Chevy Chase Baptist Church and lives nearby. Freshour has stayed in touch with the nuns from the Missionaries of Charity order who ran the home and said that the remaining three or four sisters have moved to another house in Washington, where they are ministering to the homeless.

I called the Missionaries of Charity in Washington, a worldwide Roman Catholic order established by Mother Teresa. The nun who answered the phone said she couldn't give her name because they aren't allowed to talk to the press. She did say, however, that the sisters who are in the order now were not in the order when the adoption home opened, so she wasn't sure why it closed. She added that the order sold the Chevy Chase house in 2002. “We work with the poor and we didn't have any work there because it's a rich neighborhood,” she said.

For our 2007 investigative report in Mother Jones on Clinton's conservative alliances and her connection with the Family, we also explored what became of the Mother Teresa Home for Infant Children, and encountered similar obstacles. Although Belz was concerned about whether the home was used for its intended purpose, there is another takeaway from Clinton's continuing emphasis on the story: what it reveals about Clinton's pioneering “common ground” efforts on abortion. From a face-saving partnership with the beloved pro-life figure of Mother Teresa, Clinton continued to declare all abortions “tragic,” align herself with stringently anti-abortion and other conservative actors, and serve as the model for a generation of Democratic politicians eager to disown any affiliation with reproductive rights.

In delving into Clinton's religious history, we studied her relationships with a number of spiritual mentors, including Tikkun's Michael Lerner, who was soon replaced by “sacred psychologist” Jean Houston, who famously helped the First Lady get in touch with the ghost of Eleanor Roosevelt. Later, after Mother Teresa died, Clinton invoked the spirit of the nun as her guiding light so religiously that one might be excused for wondering whether she meant it more than metaphorically.

Mother Teresa, after all, was the catalyst for the strange religion by which Clinton came to be friends with far-right Senator Sam Brownback. (Watching Clinton suffer the upbraiding with a smile, former Clinton-foe Brownback recalled his thoughts to Jeff: “Now, there's gotta be a great lesson here.” He found it when Clinton got to the Senate and joined him in supporting Tom DeLay's “Day of Reconciliation” resolution following the 2000 election, urging Americans to “pray for our leaders,” especially Bush.)

After Clinton bowed to Mother Teresa's reproof from the dais, she gained some bipartisan credibility. Mother Teresa got something out of the deal as well: a now-empty building that could serve as a brick and mortar symbol for faith-trading politics. After the 1994 Breakfast, Mother Teresa insisted Clinton prove her dedication to abortion alternatives by setting up an orphanage for the nun in Washington DC. In her autobiography, Clinton writes that Mother Teresa was a “relentless lobbyist,” pushing Hillary to follow through on her promise to get Mother Teresa “her center for babies.”

This was “no small feat,” as Belz notes, “in a city that was known then for its inefficient and corrupt bureaucracy.” But as Clinton describes in Living History, she put the muscle of the White House behind the initiative, “cutting red tape with the housing authorities and human services officials.” The Mother Teresa Home for Infant Children opened in 1995. On opening day, writes Clinton, Mother Teresa “gripped my arm in her small, strong hand and dragged me upstairs to see the freshly painted nursery and rows of bassinets waiting to be filled with infants. Her enthusiasm was irresistible. By then I fully understood how this humble nun could move nations to her will.”

Now, the building that had housed the orphanage (on Western Avenue in the affluent neighborhood of Chevy Chase, in DC) has no more bassinets. In fact, when we reported on the house in 2006, it was for sale: a $3 million Tudor mansion being advertised as an ideal embassy location in one the most affluent neighborhoods in the country, home to a host of foreign military commissions and attachés.

At the Washington location, next to a hospital and opposite a Catholic school, we found a two-story brownstone with a sign outside reading “Missionaries of Charity”: the name of Mother Teresa's 4,500-strong Vatican order. The missionaries have been the target of ongoingaccusations from former volunteers and employees who charge that many of the charity donations sustaining the reportedly $100 million operation are funneled away from their intended — and often specified — destinations. Instead, they claim that donations finance evangelism programs or lavish headquarters, and that the operating principle of Missionaries of Charity chapters is to place the “spiritual well-being” of poor patients above their physical condition, secretly baptizing dying patients while refusing to use their abundant financial resources to deliver life-saving medical treatment.

We wanted to ask Teresa's organization why they'd flipped the property, and whether they'd ever had the proper medical facilities in place for an orphanage. But when we knocked on the door to the DC Missionaries of Charity, no one answered. And when we called, a volunteer upstairs told us, in a soft but unbudging voice, that she could not come down to let us in; that she could not answer any questions about how the Home for Infants had become a Missionaries of Charity chapter; that they had no literature to give us, nor any representative we could contact later; that they were a charity yes, but she couldn't tell us in what way; and that, lastly, she had to hang up now. Clinton's office would prove no more forthcoming. When contacted numerous times in 2006 for comment, Clinton's representatives seemed distressed by the very line of questioning, as though the then-Senator's good intentions should suffice.

It's a story that reads like the moral of Clinton's courtship of the religious right: a “center for babies” meant to symbolize the “common ground” Clinton and the anti-abortion hardline share, since drifted quietly into a sectarian operation with deeply conservative religious practices, and ethics questions that remain unanswered.

Research support for this story was provided by the Investigative Fund at The Nation Institute.