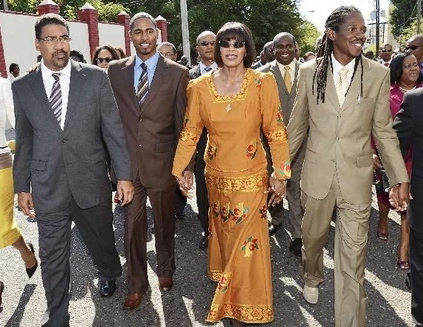 Jamaica’s only gay rights organization is at the end of a long driveway in a quiet Kingston neighborhood.

Outside, there’s a surveillance camera; inside, there’s a panic alarm connected to a 24-hour guard service. Security is so tight, the staff use pseudonyms.

Dane Lewis, JFLAG’s 37-year-old director, is the only one who uses his real name.

Soft-spoken and thoughtful, Lewis is no firebrand. Yet he may have one of the country’s most dangerous jobs.

In 2000, a JFLAG founder fled the country after repeated threats. Four years later, another founder was killed with a machete during a robbery in his home. And JFLAG’s last director was attacked by a mob in 2007 and granted political asylum in Canada.

According to Human Rights Watch, Jamaica has an “epidemic of homophobic violence.” A gay advocacy group estimates that since 1997, nearly 40 people have been killed there because of their sexual orientation.

Police say the reports of violence are exaggerated, and many gay murders are crimes of passion or opportunity.

Lewis acknowledges it’s a dangerous environment for gays and lesbians, but he’s staying.

“I know that we all can’t leave,” he said. “Somebody has to stay and fight the fight.”

The animosity towards gays in Jamaica is deeply-rooted in the country’s Christian traditions. People often equate homosexuals with pedophiles and other sexual predators.

For years, popular dancehall songs have celebrated violence against gays and lesbians.

At the Half-Way Tree bus station in downtown Kingston, the idea of gays living openly here provoked violent outbursts. One man said he would “stab them” and “chop them up,” using the Jamaican slang for gays, “batty man.”

“No batty man around on the street, gwan, gwan away wid dat,” he said.

Another man told me that he didn’t’ think that anyone in Jamaica would accept two men kissing or walking down the road.

“I would probably beat one of them because that’s definitely against everything I believe in,” the man said.

In 2008, when then Prime Minister Bruce Golding was interviewed by the BBC, he was asked if he would want to live in a Jamaica where a gay man or woman could be in the cabinet.

“Sure they can be in the cabinet,” Golding said. “But not mine.”

“Jamaica is one of the most homophobic countries in the world.”

Golding’s comment “was a signal to homophobia in Jamaica,” d’Aguilar said, “and homophobia became even more rampant.”

In 2011, reports to JFLAG of violence and discrimination against gays were triple what they were in 2008.

Steve Ralls, a spokesman for the US-based group, Immigration Equality, which handles asylum cases based on sexual orientation, says that his group has more clients from Jamaica than any other country in the world.

“Many of our clients from Jamaica, especially lesbians, report to Immigration Equality stories of horrific violence, including family members who find individuals to rape their daughters as a method to correct their sexual orientation,” Ralls said.

But last year, something surprising happened in Jamaica.

It was when the country’s two candidates for prime minister met for a televised debate. The moderator asked them, “What do you think of former Prime Minister Golding’s statement that homosexuals were not welcome in his cabinet and do you share his sentiments?”

One candidate, Andrew Holness, dodged the question. His opponent, Portia Simpson-Miller, did not.

“I do not support the position of the former prime minister, because people should be appointed based on their ability,” Simpson-Miller said.

Then she added, “No one should be discriminated against because of their sexual orientation.”

She also said the government should revisit its anti-gay law. No Jamaican politician of her stature had ever said anything like this in public, especially while running for office.

But since taking office, the Prime Minister hasn’t addressed the anti-gay law.

“I doubt she’s sincere about it,” said Lloyd d’Aguilar.

“It’s been [more than] 100 days since she’s been elected and she has said nothing and done nothing. She has to show true commitment to changing the attitudes of Jamaicans against gay people.”

Still, others argue for more patience.

“It has to be skillfully done,” said Horace Helps, a journalist with Jamaica’s Observer Newspaper.

Dane Lewis of JFLAG is willing to wait.

He’s working patiently, behind the scenes, from his unmarked office hidden down a long driveway.

That question posed to the candidates for prime minister back in December: “What do you think of former Prime Minister Golding’s statement that homosexuals were not welcome…?”

Lewis was responsible for that. We have a number of allies in the media, he said, and one of those allies was moderating the political debate.

“She ensured the question was asked, and didn’t let up until she got the answer.”

Lewis was listening in his car when those words were spoken. He rushed home to let his dogs out and continued listening on a portable radio.

“I had to be reserved as I walked the dogs. I couldn’t jump and scream. I’m sure my neighbors would have heard me say Yes! Yes!”

He had to be reserved, because celebrating might reveal that he’s gay, and for now, in Jamaica, that’s just too dangerous.

Tristram Korten reported his story with support from the Investigative Fund of the Nation Institute.

Tristram Korten is a Miami-based journalist who writes about organized crime, environmental issues, and human rights.